The seventh try was the charm for the City of Milwaukee, as its streetcar proposal finally won an important $14.2 million TIGER grant from the U.S. Department of Transportation, after six previous unsuccessful attempts to secure funding for the streetcar expansion.

The grant award was announced earlier in the week, and an event was held downtown Thursday, October 29th, to accept the funding and for streetcar supporters to do a victory lap. Streetcar opponents were nowhere to be found as a crowd of about 60 gathered on the steps of the U.S. Bank Center overlooking the projected streetcar route along E. Michigan St. at N. Cass St. 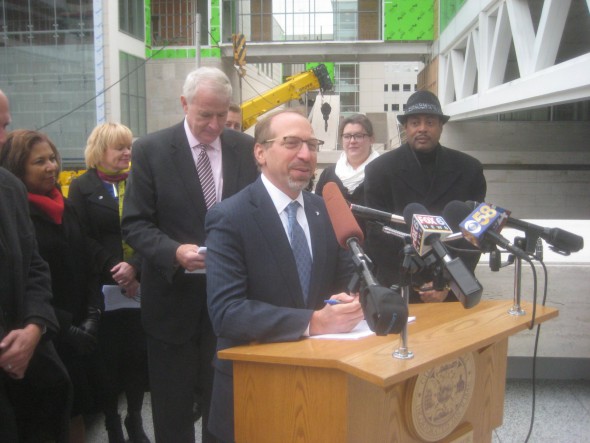 The presentation was made by Peter M. Rogoff, the Undersecretary of Transportation for Policy and former Federal Transit Administrator. He said the grant was made after “a brutal competition” where demand for transit dollars greatly exceeded the sums appropriated.

According to a press release:

“The project is one of 39 federally-funded transportation projects in 34 states selected to receive a total of $500 million under the Department’s Transportation Investment Generating Economic Recovery (TIGER) program.

The Department received 627 eligible applications from 50 states and several U.S. territories, including Tribal governments, requesting 20 times the $500 million available for the program.”

One of the intentions of the program is to “accelerate the renaissance” of urban areas through transit infrastructure funding, said Rogoff. Since 2009 the program has awarded $4.2 billion in grants to 381 projects in all 50 states. To date there have been over 6,700 applications requesting $134 billion in funds.

So, why does the government invest in streetcars?

The importance of transit funding in an urban area is not just “how to get from Point A to Point B, but how to make A and B better places,” Rogoff said.

“When you make investments downtown it begets a cycle,” Rogoff said. And it’s not one of those downward cycles that so many people relate to urban areas, he said.

Quite to the contrary. “Rail investment starts an upward cycle,” he said, using examples like Dallas and Salt Lake City, “where you did not expect that people would get out of their cars.”

Now these cities, and others are expanding their streetcar lines, and Rogoff spoke of the “secondary and tertiary investments” and “third and fourth boost” to the economy that comes with rail infrastructure expenditures.

Milwaukee’s streetcar project, which we have covered extensively in Urban Milwaukee, has had “heat, light and noise,” Rogoff said, alluding to the project’s long and contentious history.

Ald. Bob Bauman mentioned these controversies as a contributing reason for the city’s failure to secure TIGER funding in its six previous tries.

“The project was good on its merits,” he said of Milwaukee’s streetcar proposal, “but it suffered from political problems” that concerned federal officials. The program had been authorized, and then re-authorized. “We let a lot of money slip through our fingers” as the project was debated, and we missed opportunities for streetcar expansion funding for the simple reason that we never built a streetcar line to begin with.

But this time, the funding went through, and Bauman concluded his remarks by offering his gratitude to Rogoff. “Thank you for continuing to open the mail from the City of Milwaukee,” he said. 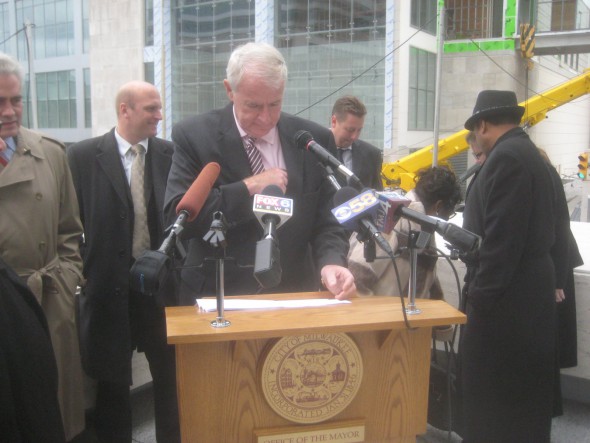 Mayor Barrett also put the political issues into perspective, and into the rearview mirror. “I thank the people who have stood with us because they understand that this is all about economic development,” he said. This at a time when there is “more investment than we have seen in generations” here.

Barrett cited Bauman and Ald. Nik Kovac as the two most enthusiastic supporters of the streetcar project on the Common Council. “They prodded, and prodded and prodded and said, ‘let’s get this thing going,'” the mayor said. There will be further expansions, he said, including to Kovac’s UWM neighborhood, Bauman’s Marquette University, the Walker’s Point of Ald. Jose Perez and the Airport district of Ald. Terry Witkowski. The last one mentioned will have to go through the territory of Ald. Tony Zielinski, a streetcar opponent who was not at the event.

Other speakers included Beth Weirick of Downtown Milwaukee, Ken Kraemer of Building Advantage, representing the union construction workers who are finding employment in the downtown construction, Dr. Eve Hall, the CEO of the African-American Chamber of Commerce, and Ald. Willie Wade, who also serves on the Redevelopment Authority of the City of Milwaukee.

Hall and Wade touted the big picture aspect of the streetcar and emphasized that it would provide a means to tie together an unnecessarily divided community, and to provide jobs for a needy segment of the population. Rep. Gwen Moore and Sen. Tammy Baldwin sent representatives to the event, and were recognized for their contribution to securing the funding.

The 2 p.m. press conference brought dozens of stakeholders and supporters to the site. They included Department of City Development Commissioner Rocky Marcoux, City Engineer Jeff Polenske, Public Works Commissioner Ghassan Korban and other city employees, including Greg Patin. Kris Martinsek, who has handled publicity for the streetcar, was in the crowd snapping photographs for her streetcar Facebook page. Also present was Rick Barrett, the developer of The Couture, which is to have a streetcar stop incorporated into its construction, along with his architect, Matt Rinka, whose firm has also been selected to work on the Lakefront Gateway Plaza announced earlier this week. [See Plenty of Horne: “Lakefront Gateway Design Winner Named.”] Jeff Bentoff and Joel Brennan were also in attendance for the ceremony. 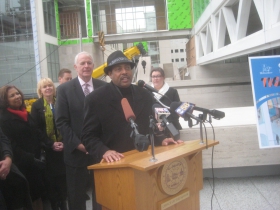 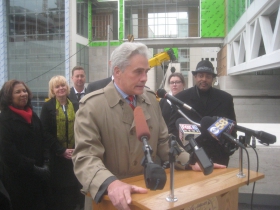 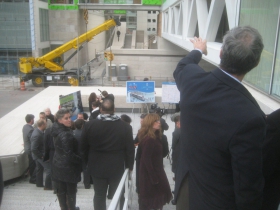 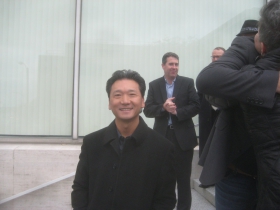 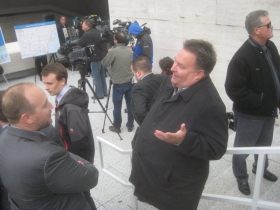 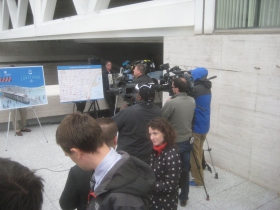 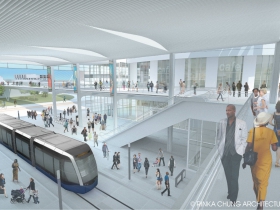 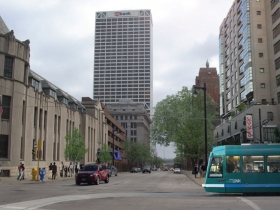 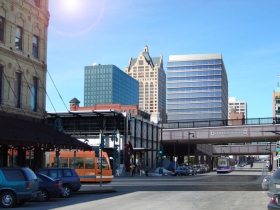