Committee Takes No Action on Streetcar

In a predicted decision, the Public Works Committee voted to place on file the resolution authorizing the Department of Public Works to move forward with the Milwaukee Streetcar. The make-up of the committee all but insured the tabling vote, given that two of its five members are running against incumbent mayor and streetcar proponent Tom Barrett. The parliamentary maneuvering sets up a full Common Council floor debate on the issue on December 16th.

The Public Works Committee is chaired by streetcar legislation sponsor Ald. Robert Bauman and vice chaired by streetcar co-sponsor Ald. Willie Wade, but also sitting on the committee are aldermen Robert Donovan and Joe Davis, Sr., both candidates for mayor who oppose the streetcar. The fifth member of the committee is Ald. Jim Bohl, who had voted against approving the financing package for the streetcar at yesterday’s Zoning Neighborhoods & Development Committee.

The meeting this morning was much different from the public hearing on the project held yesterday in the Zoning, Neighborhoods & Development Committee. Yesterday’s meeting had an extremely rare presentation from the mayor, while today’s meeting featured City Engineer Jeff Polenske and Department of Public Works Commissioner Ghassan Korban walking through a more engineering focused presentation. While the mayor’s presentation wasn’t interrupted and took approximately 15 minutes, today’s presentation was repeatedly interrupted to the point that it took two nearly two hours to reach something of a conclusion.

Following committee approval of the tax incremental financing districts and the placing on file of the operating plan, the full council will take up the issue at their regularly scheduled December 16th meeting. The merits of the streetcar will be debated on the council floor without a public hearing and without a presentation by the mayor or his appointed commissioners. Streetcar opponents have two parliamentary procedures that can delay a vote on the project for up to one session: their first option could be to move to hold the file in council for one session (and can only be used once); the next move would be to move to reconsider and enter into the journal following approval of the project (the member making the motion would have to have previously voted on the prevailing side), also holding it for one month. Both moves require only three votes, and it’s pretty clear Davis and Donovan will attempt to use one of these maneuvers.

Whether it comes in December or January, the council will eventually take action on the files. As alderman Wade remarked today “this ain’t a slam dunk,” but there does appear to enough votes to get the project passed. Of the 15 member council, four members (Bohl, Davis, Donovan, Tony Zielinski) have made their opposition known, four are sponsors of the legislation (Bauman, Ashanti Hamilton, Nik Kovac, Wade), and two more have voted for it in committee (aldermen Jose Perez and Russell Stamper). During the last approval in 2011, council members Milele Coggs, Robert Puente and Terry Witkowski also voted for the project, but have not indicated publicly how they intend to vote this time. Council president Michael Murphy also voted against the project last time, but has not indicated publicly his stance on the final approval.

Perhaps the most unusual aspect of the meeting was how quiet Donovan was, speaking far less words than he’s issued in streetcar press releases. Donovan did attack Polenske for saying the city engineers had reached 60 percent design in the project by August 2013. Donovan said this contradicted what Polenske had said in the past, but Polenske and Korban clarified this didn’t mean it was 60 percent engineered, given the lack of response from the utilities back in 2013.

Donovan also made the first motion of the meeting, during the repeatedly derailed presentation, motioning to place the file on hold for one session. He argued that the mayor was fast tracking the proposal, while Bauman disagreed, saying the last vote on the project was in 2011 and the funds date back to 1991. Donovan also said he was opposed to the use of tax incremental financing for the project and that he was awaiting a legal opinion from the city attorney as to whether the bonds issued by the Redevelopment Authority of the City of Milwaukee were eligible to be voted on in a referendum. City officials have said such funding cannot be made subject to a referendum. 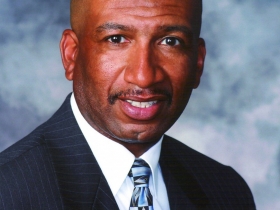 The other mayoral candidate in the room wasn’t nearly as quiet. Davis was loud and fast as he railed against the project at length. Davis asked about MCTS ridership data along the route, which sent Comptroller Martin Matson running to his office to get an email from Southeastern Wisconsin Regional Planning Commission director Ken Yunker (poor Marty was never given the chance to speak again as Davis had moved on, even though Matson had the data). Davis claimed the project wouldn’t help any of his constituents or others that aren’t Downtown, which drew the ire of alderman Bauman.

Davis went on to rail against the mayor’s claim that millenials support the project, calling them “millenniums” repeatedly and asking if his “black millenniums” matter. Davis hammered on the fact that not a single constituent has called him about the project.

Davis also asked about the effects of our cold climate on the proposed streetcar tracks. Project consultant Ashley Booth of HNTB responded, noting that planners have studied other systems – the Minneapolis – St. Paul light rail system in particular. Booth noted that while the Twin Cities runs as a light rail system outside of Downtown, it operates using the same trackbed technology as the Milwaukee Streetcar would when operating downtown.

Davis and Bauman shouted over one another several times as to who was correct and what could be done with the federal money, until city lobbyist Jennifer Gonda approached the table. She noted that the 2009 congressional earmark that controls the funds dictates that the remaining $54.9 million (out of 1991’s $289 million) must be spent on a “downtown Milwaukee fixed rail circulator.” This was in response to Davis’s desire to instead build the system in the 30th Street Corridor (Century City). Wade weighed in with “we have to get something in the ground first so we can get to the 30th Street Corridor.”

In one of the funnier moments, after Bauman repeatedly suggested Davis was simply raising “partisan” objections because of his his mayoral run, Davis stated “I’m not being disingenuous, I’m being Joe Davis.”

Wade ultimately moved to approve the resolution before the committee, which failed 2-3 (Bauman, Wade ayes). Bohl than made a motion to place the resolution on file, which passed with four votes (Bauman, Bohl, Donovan, Wade). This move sends the file to the full council without a recommendation or requirement for anything beyond a simple majority vote to approve.

Let the Common Council and Mayor know what you think about the project via the form on our website. We’ll keep it open until the expected project vote on December 16th.

7 thoughts on “Eyes on Milwaukee: Committee Takes No Action on Streetcar”