Streetcar Backers Say They Have the Votes

Aldermen Witkowski and Perez now favor it, and touted plan to extend the line into their south-side districts.

The Milwaukee Streetcar starter system has the votes it needs to pass the Milwaukee Common Council, according to project sponsor alderman Robert Bauman. Taking questions following a press conference called by one his colleagues on the Common Council, Bauman said “I think we do have enough votes.” That point was repeatedly reinforced as four alderman, a county supervisor and a state representative took questions on the project a day before the crucial vote.

However, just because the project has the votes to pass doesn’t mean that will happen at tomorrow’s Common Council meeting. Following last month’s one-time parliamentary manuver that held the project in council with only three votes, project opponents have one more arrow in their quiver. Following a floor debate on the merits of the project, a roll call vote will be taken tomorrow. Assuming the project passes (as Bauman predicts), opponents may move for reconsideration of their vote. It only takes three votes to allow reconsideration, which enters the matter on the journal to be reconsidered at the next council meeting (February 10th). In brief, the streetcar is likely to pass the council, but not for another three weeks. 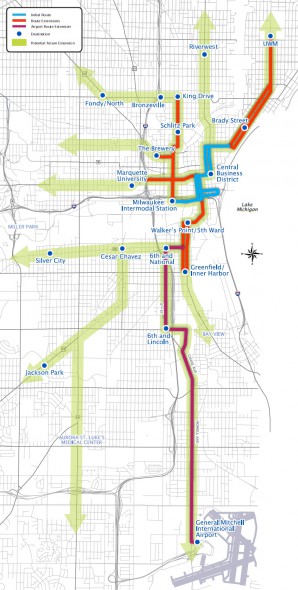 Perez and Witkowski both noted that no engineering work has been done on the extension yet, and that it would only move forward if the downtown starter system is built. Bauman later said the city would pursue federal funding for the extension.

More significant than the route extension was the symbolism of Witkowski and Perez speaking positively about the proposed streetcar project. Witkowski in particular has been considered one of the swing votes to push the measure to success.

Witkowski was effusive in his praise of the proposed streetcar system as part of a broader multi-modal transportation system. “Milwaukee is fine on highways,” he said. “We do need more in the way of moving people with rail.” He noted the streetcar system would be one piece of the broader aerotropolis development around the airport and that “people expect it at the airport.” When constituents have asked how they benefit if they never go downtown, Witkowski says he’s answered that “any development in the city spreads the tax base. Two percent of the city pays thirteen percent of the taxes. You don’t have to be a user of the system to benefit from the system.”

Alderman Russell Stamper, II was standing behind the cameras and is a likely yes vote for the project. He will hold a public meeting on the project in his district tonight with the mayor. City development commissioner Rocky Marcoux and city engineer Jeff Polenske were also in attendance.

The potential for a referendum still exists, but the petition drive for a referendum faces a number of challenges, not the least of which is the need for 31,000 signatures. Streetcar opponents had originally announced that they would turn the 31,000 signatures in advance of the next vote, which is scheduled for tomorrow. As Bruce Murphy has written, the timing of the referendum makes success unlikely, given that the streetcar project could be approved before the signatures are turned in.

Ald. Tony Zielinski has been a vocal opponent of the Milwaukee Streetcar project. Despite voting for the project in 2011 (after an amendment he introduced was added), Zielinski announced his intent to vote against the project on the Bay View Town Hall Facebook group. That post generated more than 1,000 comments from parties on both sides of the issue.

His opposition to the streetcar might have come back to bite the Bay View alderman. The route extension proposed today goes west of Bay View to get to the airport. In addition, another extension on the map (of which there are many) stops short of Bay View, terminating at E. Greenfield Ave. Future extensions are still mapped to Bay View, and all of the engineering work remains to be done, but it’s an interesting omission.

Of course, it might be not be political payback at all, it could be simply that project supporters Witkowski and Perez want the extension to run through as much of their districts as possible. 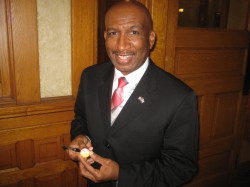 Alderman and mayoral candidate Joe Davis drew the ire of alderman Bauman following a question by a member of the press. Davis yesterday released a video and press release claiming that a fixed rail system should run through Century City (the 30th Street Corridor) instead of downtown. Bauman noted that in 2007 the council voted to study just that as part of an extension of the possible Kenosha-Racine-Milwaukee (KRM) commuter rail line, but Davis was not a sponsor of that item. The downtown alderman went on to note that Davis’ proposal would be far more expensive than the streetcar starter proposal, because linking Century City with Downtown by fixed rail would require extension negotiation with many private property owners, including a number of railroads.

“The End of Western Civilization”

For years Mayor Tom Barrett has referenced how in his discussions with leaders of other cities, they’ve told him that streetcar opponents typically portray a city’s first fixed rail project as “the end of western civilization.” He’s noted that the leaders follow that up by saying that as soon as the streetcar gets in the ground, the discussion changes from opposition to getting the system extended. While the streetcar still has plenty of opponents and is at least many months from discussion, today’s press conference suggests the discussion may already be moving in the direction of politicians battling to get the streetcar into their districts.

Streetcar on the Radio

Monday, January 12th, the University Club of Milwaukee hosted a panel on the Milwaukee Streetcar project. Following a presentation by mayor Tom Barrett, Mitch Teich of WUWM moderated a panel that included Rob Henken of the Public Policy Forum, Kevin Muhs of the Southeastern Wisconsin Regional Planning Commission and yours truly. Teich edited down the lengthy debate into a segment on WUWM’s Lake Effect program. Give it a listen.

6 thoughts on “Eyes on Milwaukee: Streetcar Backers Say They Have the Votes”