Millennials And The Streetcar

Will it attract young professionals?

One of the claims critics make against the proposed Milwaukee Streetcar is that it won’t attract millennials. Does the evidence support this assertion?

As Urban Milwaukee editor Bruce Murphy has written, polling data and other research documents a remarkable resurgence in the popularity of urban living. One reason for this is that millenials—broadly defined as those entering the workforce after the year 2000–like the freedom and money saved by not having to depend on a car for transportation.

A Rockefeller Foundation poll of millenials in 10 cities found 54 percent said they would consider moving to another city that had more and better options for getting around. Two thirds included access to high quality transportation as one of the top three criteria for deciding where to live. 80 percent said it’s important to have a wide range of transportation options.

Other research shows young people today drive substantially fewer miles than they did a few years ago and the percentage with a driver’s license fell to the lowest level in 50 years. Whereas past generations equated access to a car with freedom, today’s younger generation regards having alternatives to the car as giving freedom.

This shift represents an opportunity for cities and businesses who respond creatively to it. It also represents a threat to those who insist on doing things the same old way. The business landscape is littered with the bones of once-dominant companies who refused to change with the times.

The Cushman and Wakefield Global Business Group has issued a research report entitled Facing the Millennial Wave. The report is aimed at business leaders asking “How do we win the race for millennial talent?” The report discusses the shift from suburban to urban in where young people wish to live:

This residential shift has begun to affect the location choices of business, particularly in the post-recession years. While the suburban corporate campus gained favor as generations of talent relocated to suburbs, central cities have now emerged as the favored environments for businesses to invest and grow. Downtown locations are now viewed as the optimal and most dynamic option for many businesses – especially those in technology and creative industries.

The report offers examples of companies moving from suburban to more urban environments. For instance, a Chicago-based information technology company facing an upcoming lease renewal for its office space in a suburban submarket near multiple highways and upper income residential communities. The company concluded that a “downtown location maximized access to both the Millennial talent pool and existing employees (including the suburban-based upper management labor pool) via the region’s commuter rail system. Despite an increase in rental rates of over 30%, the company chose a downtown location to better position the company for growth in the highly competitive sector.”

The report added that even companies that didn’t make a full-scale move might open a downtown marketing or tech office to attract talent and leverage excitement. However, it cautions that “some central business districts will miss out on the resurgence of demand, particularly those lacking strong public transportation systems…”

Michael McDermott of their Global Consulting Group explained that many of their clients are companies looking for new locations with an atmosphere similar to their current home city. “Quite often we see successful West Coast companies looking for that ‘little bit of San Francisco’ in the lower-cost and less competitive Midwest. Cities that boast large populations of educated and urban-centric Millennials tend to do well in our location screening.”

The model developed by Cushman and Wakefield starts with the Nielsen company’s Prizm system which classifies people into one of 66 segments, under names like “Urban Dreams” (Upper middle, middle aged, family mix) or “Close  in couples” (lower middle, older, mostly without kids). Nielsen then analyzes census data to get a picture of the mix of people by segments in each census tract. The Prizm system is used by marketers wishing to target people likely to be their customers.

Cushman uses three of the 66 segments, which they believe together capture the highly educated employees desired by its clients. (Strictly speaking only one of the segments is limited to people under 35; Nielsen describes the second as 25-44 and the third as under 55). It then searches out cities with neighborhoods having a high concentration of people in these three segments. For example the segments identified in the Milwaukee area have an average concentration of millennials that is 11 times that of the United States. 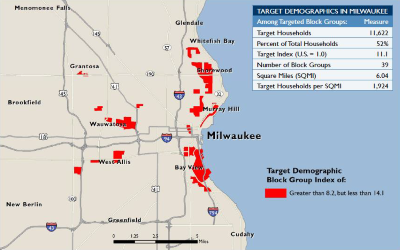 The map to the right shows what Cushman found in Milwaukee. No one following the changing demographics should be surprised by most of the findings. High concentrations of millennial households can be found in Bay View, Walker’s Point, parts of the East Side (Murray Hill), Shorewood, and Wauwatosa. More surprising, to me at least, was the concentration in West Allis.

The proposed streetcar is centrally located among the areas with high concentrations of Millennials. It seems well planned to enhance Milwaukee’s attractiveness to them and thus its attractiveness to companies dependent on hiring them.

When employees of Kodak invented the digital camera, management put its development on hold, fearing it would destroy the most profitable part of the business—the sale of photographic paper and supplies. At the time that seemed like the safe decision. In the end it destroyed the company.

Many of the critics of the streetcar decry it as too risky. I see not building it as the risky decision—a dagger aimed at the ability of Milwaukee to transform itself in response to a changing environment. Consider all the past decisions to keep transportation choices narrow: to kill the train to Madison, to kill light rail, to kill the train to Illinois through Racine and Kenosha, and the decision to reject the Talgo trainsets. The message running through all these decisions is that wanting alternatives to the car is illegitimate. Anyone wishing to live in a city with attributes of San Francisco (but cheaper) shouldn’t look to Wisconsin.

In evaluating the projected capital and operating costs of the Milwaukee streetcar, the Southeastern Wisconsin Regional Planning Commission compared it to six recently-constructed projects. With the exception of one in Seattle, all the projects (Atlanta, Cincinnati, Detroit, Kansas City, and Tucson) are in cities which the Rockefeller Foundation would call “aspiring” when it comes to public transportation. Unlike some of those others, the Milwaukee project seems remarkably safe financially, with funding through federal grants and tax incremental districts.

An obvious question, then, is what lies behind the intensity of the opposition to the streetcar. Particularly strange is that most of it seems to come from people who have no financial exposure whatsoever, those who live well beyond the Milwaukee city limits.

This would suggest that something more is going on—that opponents feel threatened by people who make different lifestyle choices than they do. They cannot imagine that anyone would forego the car and therefore try to use government to force others to make the same choices. 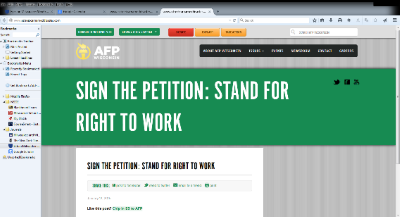 Although Groups like Citizens for Responsible Government and Americans for Prosperity like to talk about freedom and the free market, in practice they seem intent on using the government to force others to make decisions they would make. It is perhaps telling that, several days after it was announced, the AFP’s Streetcar Named Disaster link led to a site asking people to support right to work, another example of trying to use governmental power to control private decisions.

These opponents also claim the streetcar won’t attract young people, but all the evidence suggests the contrary.

50 thoughts on “Data Wonk: Millennials And The Streetcar”