There are many reasons, but a key one may be their crushing student debt loads.

Young people seem to be leaving the suburbs in droves.

The trend could be seen in other metro areas. Outside Washington D.C., suburbs like Chevy Chase lost 34 percent of its 25- to 34-year-olds, Bethesda 19.2 percent and Potomac 27 percent. “The declines were comparable for Kenilworth, Winnetka and Glencoe outside Chicago, and Nantucket, Barnstable and Norfolk Counties outside Boston.”

Young people raised in the suburbs seem to find cities far more interesting places to live. You can see that in Milwaukee as graduates of UW-Milwaukee, Marquette or MSOE settle down to live in the city. The remarkable resurgence of Bay View and Riverwest has been driven by people in their twenties and thirties drawn to the vibrant urban scene there.

This kind of thing has happened in the past, though on a smaller scale, and as these urban settlers had children, they moved to the suburbs, attracted by their school systems. Will that desertion of the city recur?

There are reasons to doubt this. For one thing, the sheer numbers of younger adults choosing the city are much higher than in previous eras. This has created a critical mass in neighborhoods like Bay View where the entire dynamic of the neighborhood is so transformed that it seems less likely to regress. For another thing, crime has been declining in the cities for some 20 years. Moreover, crime is a hyper-local phenomenon, so while it is very high in certain Milwaukee zipcodes, people in more upscale neighborhoods rarely encounter it.

But another factor that may make cities more attractive for young people is the rising level of student debt. For decades, state governments have been decreasing support of public universities, forcing them to jack up tuition. Since 1978, as a story in Bloomberg reported, the cost of college tuition has risen 12-fold — by 1,120 percent!

The result has been a soaring increase in student loans and resulting student debt. The percentage of 25-year-olds with outstanding student loan debt has grown to 43 percent through the end of 2012, up from just 25 percent nine years earlier.

A ball park estimate of the monthly payment on that debt, assuming 6.8 percent interest and a 10-year repayment plan, would be $370. And there are an awful lot of people facing this situation. As of 2012, 14 million Americans under age 30 owed money on student loans, followed by 10.6 million for the 30-39 group, according to a study by the Federal Reserve Bank of New York.

Adding difficulty is that many graduates aren’t getting the kind of high paying jobs needed to handle this crushing debt. An article on PolicyMic.com points out that between 2005 and 2012, the average student loan debt jumped 35 percent, adjusting for inflation, while the median salary dropped 2.2 percent.

As a result, younger people are more likely to put off buying a home or a new car.  The share of younger households — headed by those under age 35 — who own their primary residence fell sharply from 40 percent in 2007 to 34 percent in 2011, according to the Pew Research Center. During this same period the proportion of these households with money owed on an automobile dropped from 44 percent to 32 percent. And during this same period the proportion of households headed by an adult younger than 25 who owned or leased at least one vehicle dropped from 73 percent to 66 percent.

If you rent rather than own a home, and if you don’t have a car, the city is a far more convenient place to live. And for technology-oriented young people, using their mobile phone to check when the next bus or streetcar or subway train is arriving, or to order a ride from an Uber driver, is a simple, convenient way to live. 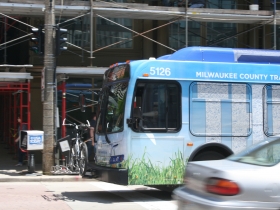 All of which might help explain why the number of miles driven in cars has been declining for more than ten years.  A study by WISPIRG found the average American aged 16 to 34 drove 23 percent fewer miles in 2009 than the average young person in 2001. Meanwhile, the number of passengers miles traveled by young people on public transportation increased 40 percent nationwide from 2001 to 2009. Additionally, young Americans also walked up to 16 percent more and biked up to 24 percent more than they did in 2001.

An April 2014 survey of Millennials in 10 U.S. Cities by the Rockefeller Foundation and Transportation for America found that 60 percent of Millennials want access to better transit options and the ability to be less reliant on a car. About 54 percent said they would consider moving to another city if it had better transportation options, and 46 percent said they would seriously consider giving up their car if they have a range of transportation options available.

A WISPIRG study of Wisconsin’s Millennials found similar results: 84 percent said that it was either “very important” or “somewhat important” for them to have transportation options other than a car to get around and 60 percent said they would be “somewhat more likely” or “more likely” to stay in Wisconsin after graduation if they could live in a place where they could get around without driving.

As the statistics suggest, this is about more than just economics or student debt. It’s about a different way of viewing the world, seeking more urban, more connected and more green ways to live. My 22–year-old son has no student debt and ready access to a car, yet he wanted to buy a bike. Why? Because all of his friends have one. If you want to combat brain drain, the adoption of bicycle-friendly policies is a pretty cheap way to make the city a welcoming place for recent college graduates.

A USA Today analysis of Census Data found there was a big increase in college grads flocking to cities from 2006 to 2011. The average increase in cities was 17 percent but it was 45 percent in Milwaukee, bigger than in all but one (San Antonio) of 20 cities the newspaper measured.

Personally, I am astounded at how Milwaukee has changed, and what an increasingly hip and urban place it has become. When I was a young college grad, the standard view of Milwaukee was that it was a second-rate city. Nowadays, most young people talk about how great Milwaukee is.

That’s not to say the suburbs will become passé, or that Milwaukee will have an easy time overcoming the problems associated with poverty in many of its neighborhoods. But for all its challenges, there is something remarkable happening in Milwaukee. I don’t think we’ve seen the end of the ongoing urban resurgence in this city or nationally. Yet it’s not at all clear that our politicians and policymakers are taking note of this trend, and how it should shape our decisions on transportation and a host of other issues.