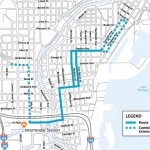 The route selected will connect the Lower East Side, East Town,  Historic Third Ward, and the Milwaukee Intermodal Station. Designed as a starter system, it is a variation on Alignment 1 originally presented in September 2009, and reflects the restraints of available funding (the city’s 60% share of the $91.5 million designated for new transit capital projects by the federal government), jobs and residential populations, and development opportunities. 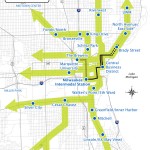 Additional extensions are planned (and are much more likely to be funded once the starter system is in the ground) to Brady Street, UWM and the rest of the East Side, Marquette and the west side, The Brewery project and the city’s northwest side, and Walker’s Point, Bay View, and the south side.

While it is expected that everyone would like the route to pass by their own front door, the annual Milwaukee Trolley Loop proves the folly of such an idea with a route that serves everyone and no one at the same time. The rubber-tired trolley buses have a different route year-after-year, delivering neither the ride quality that modern streetcars provide nor the development opportunities that well-planned modern streetcar systems have shown to generate (Portland alone generating $3.5 billion in development within two blocks of the route from their 4-mile system since 1997, a system that the Milwaukee Streetcar is patterned after). The downtown summer trolley serves to promote the businesses that pay to be along its route, the Milwaukee Streetcar is a starter system designed to connect residents and visitors to jobs and entertainment, while at the same time generating new development along the route.

Neither Rome, nor Portland, were built in a day, each had to start somewhere. This is Milwaukee’s chance to start. This is a public investment that will lead to substantially more private investment.

To ensure this is the beginning, not the end of the line email your Milwaukee Common Council representative using the form below to express your support for the Milwaukee Streetcar on what is likely to be a close vote.

For a background on the streetcar prior to the events mentioned in this article, see our Milwaukee Streetcar Timeline

17 thoughts on “Milwaukee Streetcar at Apex”