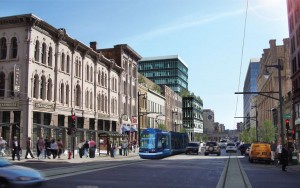 The Milwaukee Streetcar project was approved for further study this morning by the Milwaukee Connector Study Group. The approval will allow preliminary engineering to begin for the proposed streetcar starter system.

The Milwaukee Connector Study Group is the federally designated body that oversees the early 1990’s allocated $289 million for transit in Milwaukee (which has only $91.5 million remaining). The group consists of a single voting member each from the City of Milwaukee, Milwaukee County, MMAC, and the Wisconsin Center District. The study group approved the Milwaukee Streetcar for further study on a 3-1 vote with Milwaukee County casting the lone dissenting vote.

The Milwaukee Streetcar will need approval from the Milwaukee Common Council and the Mayor before construction can begin. The Common Council is likely to vote on the streetcar in early 2011, when the preliminary engineering work will be available that provides better estimates of financial and operating details.

As has been discussed previously, the streetcar will not compete with the existing MCTS system for future federal dollars, as the FTA has funds set aside for fixed-guideway systems under which the streetcar would fall. Also, implementation of a regional transit authority is still extremely important, so that the existing bus system does not see severe cuts.

As planned, the streetcar would be a key piece of the backbone for a truly regional transit system serving as a vital link between the Milwaukee Intermodal Station (stop on route of Madison-Milwaukee-Chicago high-speed rail and KRM commuter rail system), existing MCTS bus routes, and Milwaukee’s densest neighborhoods including the East Side, East Town, the Historic Third Ward, and Westown.

Please take time to look at these renderings to get a sense of what the streetcar would look like on Milwaukee streets, and how it might interface with traffic and existing buildings. 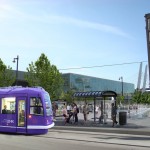 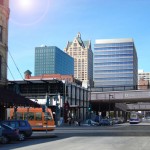 The streetcar as it meets Broadway in the Third Ward. 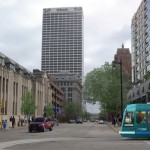 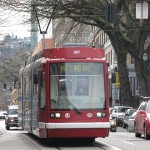 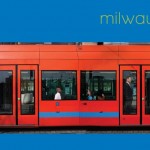 Rendering of the Milwaukee Streetcar vehicle.