The Mayor walked through the three possible routes and numerous possible future extensions.  He broke down how successful systems in cities such as Seattle, Portland, and Tacoma have started with routes similar in length to the proposed for the Milwaukee Streetcar system (2 to 3 miles).

The public is invited to attend an open house to review and comment on the proposed routes on October 8th, 2009 from 3 p.m. to 7 p.m. at the Zeidler Municipal Building at 841 N. Broadway.

Keep in mind that this is a starter system, limited by the availability of funds.  The plan is that once something is in the ground, expansions will be a lot easier.  Mayor Barrett himself describes the plan as a “trojan horse” designed to be expanded.

We invite you to vote in the below poll for your favorite route (and leave a message in the comments why), here is some quick food for thought from us.  You’re also invited to buy a streetcar t-shirt, and wear it to the event on October 8th to show your support. 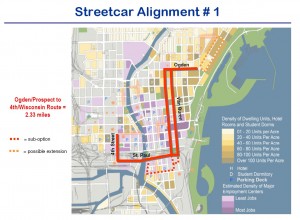 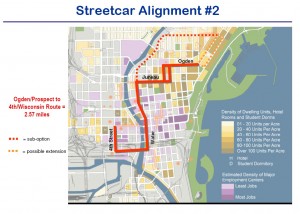 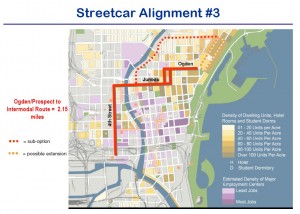 Urban Milwaukee has produced a limited number of Milwaukee Streetcar t-shirts, available for $15 a piece.