Minority of aldermen were able to use city charter provision to delay project for one month, but a majority seems poised to approve it.

Following less than two minutes of discussion the Milwaukee Common Council voted to delay the proposed Milwaukee Streetcar starter system until its next session in January. The vote to hold, which requires only three of 15 possible votes under the city charter, was quickly taken following two motions. Four other files regarding the project also were taken up and placed on hold during the meeting.

Alderman Robert Bauman moved to approve a file which would have authorized city departments to continue to work on the project. Alderman Joe Dudzik than followed up by moving to hold the file in council for one session noting how it was “appropriate to hold it for further debate amongst ourselves and with our constituents.” Alderman, mayoral candidate and streetcar opponent Robert Donovan took the floor to speak in support of Dudzik’s motion

The super minority (three votes) to hold a provision may only be used once per file. This sets up a floor debate at the regularly scheduled January 21st council meeting, but don’t expect a resolution then either. Streetcar opponents on the council can vote for the project, then move to reconsider. Their move to reconsider would allow the project to be held for one more session if it again gets just three votes in support of the delay. This would then setup a final showdown at the February 10th meeting of the council.

Four other files were also up for debate that are essential to the Milwaukee Streetcar project (141320, 141323, 141263 and 141264), which includes the two tax incremental financing (TIF) districts that were recommended for approval by the Zoning, Neighborhoods & Development Committee as well as the issuance of the project bonds and an agreement between the city and its redevelopment authority relating to the bonds.

One of those TIF districts (#82 – East Michigan Street) would encompass the under-construction 833 East office tower and the proposed $122 million The Couture. That district would fund construction of the lakefront spur of the streetcar system, as well as the public amenities that are part of The Couture. The Couture developer Rick Barrett (no relation to the mayor) agreed to assertions in a prior committee meeting by Department of City Development commissioner Rocky Marcoux that The Couture could not move forward without the streetcar. According to Marcoux, if a capital investment in transit equivalent to the cost of the to-be-demolished Downtown Transit Center was not undertaken, Milwaukee County would be required to return $8 million to the federal government to reimburse Department of Transportation for the cost of the facility. This would mean the county would have to charge Barrett $8.5 million for the land, rather than $500,000, which would make The Couture project financially unfeasible, he has said. The current plan for The Couture would devote its first floor to a public transit center, with the streetcar literally routed though the building, thereby continuing to use the land now occupied by the county’s Downtown Transit Center (now used by buses) for transit.

Also proposed to fund the streetcar, TIF district #56 (Erie/Jefferson Street) would be used to provide $18 million in capital to build the starter system. That district would also include a $400,000 grant to a company that would relocate to the city (Marcoux indicated at committee that he expects an announcement on that soon). The district would also be used as originally intended, to pay for a portion of the Milwaukee RiverWalk. The Mandel Group has recently begun soil testing on the long-anticipated Domus project on E. Erie St., and the district would pay for the public riverwalk segment (as the city has done with much of the riverwalk). This district has the excess capacity to pay for the streetcar and the relocation because of the excessive incremented value within its borders along E. Erie St.

All of the files were subject to parliamentary moves to put them on hold. The amendment to TIF district #56 and the creation of TIF district #82 as well as the issuance of bonds were both held by the same five to nine vote.

Because it did not involve spending, the agreement between the city and redevelopment authority could not be moved to a hold by a three vote minority, but another one-time avenue for a hold was available. Zielinski voted for the agreement and then immediately moved reconsideration (too soon according to council president Murphy, who hadn’t yet announced the results of the vote). Zielinski’s motion, which was approved on a 4-10 vote (Bohl switched), places the file in the journal for one session and will open the file for reconsideration at the next meeting. 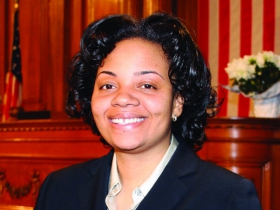 During the debates, Coggs emerged as a supporter of the project. Following the same project opposition seen in committee by Davis, another candidate for mayor, Coggs took the floor to say that “instead of so much posturing, name calling and characterization, that we discuss this on its merits.” Coggs said she makes decisions with the interest of the future of the city at heart, and this project wasn’t “a one or the other” choice. Targeting her remarks at Davis, who had suggested that poor African-Americans wouldn’t be welcome to ride the streetcar, she said he was wrong to claim “that everyone that does support this doesn’t care about community issues.”

All of the files will be up for debate again at the January 21st council meeting. Alderman Robert Puente was absent from the meeting following the recent death of his mother.

A large part of the delay on the proposed streetcar system has been attributed to delays caused by actions of the state legislature and the state Public Service Commission. The city has an ongoing lawsuit against the Public Service Commission regarding their ruling on who pays for the utility relocation. Intervention in the project by the state is almost as old as the funds for the project itself. Legislation dating back to the 1990’s blocking light rail construction had to be cleared by a Democratically-controlled legislature in an attempt to move forward a regional transit authority and Kenosha-Racine-Milwaukee (KRM) commuter rail system in 2008.

The state intervention might not be done though. Multiple observers have expressed concern that the Republican-controlled state legislature could interfere again with the project. The newly-elected legislature is back in session January 5th.

Over 1,500 people have filled out the form on our website letting the council and mayor know how they feel about the project. Feel free to add your voice to the discussion.

I’ve written much on the background of the project in prior articles dating back to 2009. Of particular interest for those not well acquainted with the project may be my report from the Zoning, Neighborhoods & Development Committee meeting on December 9th, which includes testimony from Mayor Tom Barrett.

5 thoughts on “Eyes on Milwaukee: Council Delays Streetcar Until January”