Battle of the Bobs

Leave it to Ald. Bob Bauman to upstage Ald. Bob Donovan at his own press conference. 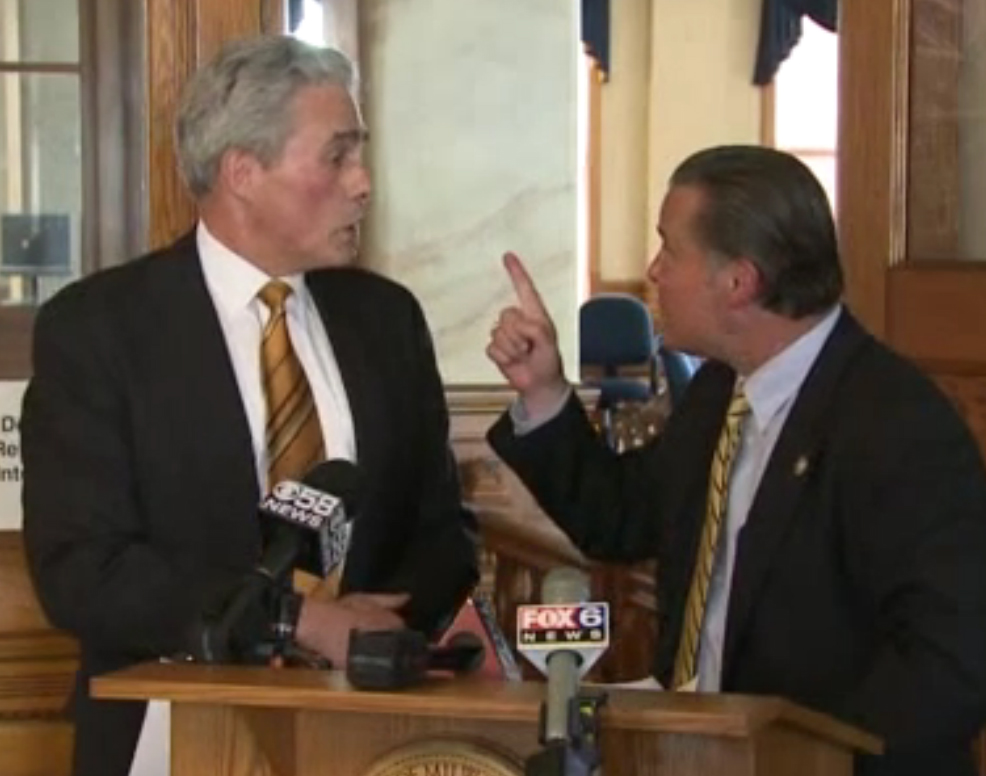 Leave it to Ald. Bob Bauman to upstage Ald. Bob Donovan at his own press conference.

Continuing his efforts to derail the Milwaukee Streetcar, Donovan held a press conference Tuesday at City Hall challenging Mayor Tom Barrett‘s position on the project. Donovan wants Barrett to promise a state subsidy for the project if he’s elected, or else put the entire project on hold. Donovan also continues to demand a referendum on the project, insisting that 70 percent of city residents oppose the project. Barrett and the rest of the Common Council have publicly ignored Donovan on this issue until yesterday. So Donovan called his press conference to dramatize his views, only to have Bauman unexpectedly join him at the podium. It was a strange twist to what was supposed to the be standard, one-sided press conference. Instead, a largely one-sided shouting match occurred.

Said Bauman to the other Bob: “I’m not going to let you lie to the public.” Bauman said Donovan was “showboating” and making “wild assertions” instead of “taking action,” noting that the federal money can’t be appropriated for another purpose and would be sent to another city if the Milwaukee project doesn’t move forward.

Donovan wasn’t having it. He started repeating “shame on you” to his fellow Bob, after Bauman claimed Donovan was demonstrating an aversion to the City of Milwaukee. Then, after weathering a few sarcastic remarks about his hatred for the city, Donovan waved his hand and walked away. But the show wasn’t over, as the Bobs continued to trade barbs from across the room.

While I don’t support Bauman’s hijacking of Donovan’s press conference (other than for the entertainment value), Bauman did manage to rather easily paint Donovan as a man of many words and little action when it comes to the streetcar. Why doesn’t Donovan introduce a file to the Common Council for a referendum on the project? Bauman noted that Donovan has proposed a referendum in the past, and his proposal was voted down. Bauman also noted that the money can’t be used for road repairs and that the federal government would send it elsewhere, to which Donovan didn’t have a clear solution.

To score points with his base and talk radio, Bob Donovan appears perfectly content to grandstand on this issue. He has used the 70 percent opposition claim numerous times, but can’t seem to back up the figure. In November he claimed to have collected about 900 signatures in opposition, far short of the approximately 320,000 he would need (that would be 70 percent of those over 18 in Milwaukee) to prove his point.

UPDATE: I was unable to make the original press conference, and have relied on the raw video from Fox 6 to draw my conclusions. I have been informed that missing from the raw video is the the uninterrupted statement Donovan gave to begin the presentation, followed by a similarly uninterrupted one from Bauman. The back and forth between Bauman and Donovan began after both had been given the chance to speak. Why those original statements are not included in the raw video segment from Fox 6 is anyone’s guess.

36 thoughts on “Battle of the Bobs: Donovan vs Bauman Streetcar Press Conference”