The TIF funding approved will also pay for infrastructure for The Couture high-rise, whose architect promised it will "push the boundaries of urban design."

With one member abstaining, the Redevelopment Authority of the City of Milwaukee approved plans for the Tax Incremental District financing portion of the Milwaukee Streetcar at a special meeting held Tuesday, December 2nd.

Department of City Development Commissioner Rocky Marcoux gave the presentation to the commissioners, using 96 slides to illustrate his talk in favor of the funding for the streetcar, as well as for public infrastructure improvements for the proposed Couture and Domus developments.

Marcoux led his comments with the city’s argument that the Couture lies within the riparian rights the city bought from the Chicago and Northwestern Railroad in 1913. He contends this agreement, which uses Lincoln Memorial Drive as the delineation between developable and non-developable properties on the filled lakebed, will prevail in future discussions.

He dismissed arguments that the Couture is proposed for filled lakebed, a point of contention that may yet need to be resolved.

Marcoux said the TID financing, including the streetcar portion, is vital for the redevelopment of the lakefront.

Pointing to the “flyover ramps” of the nearby freeway, Marcoux said, “this is the front door to the city of Milwaukee. It looks like the loading dock.”

E. Michigan St., he said, “should be one of our best streets, but it does not perform well at all.” To the south, he said, “the only people who get on Clybourn think they are getting onto the freeway,” at its eastern terminus, now a confusing turnaround dead end.

Focusing on the county-owned Transit Center, which would be demolished and replaced by the Couture, Marcoux called the building, “long obsolete,” and “ill-conceived” and “obsolete and blighted,” adding that it was “built with absolutely no accessibility.” Other than that he likes it.

The Couture, with its multi-modal concourse incorporating rail, pedestrian, bus, bicycle (and automobile) access, will provide access to the lakefront, and the surrounding areas. Once constructed, he said, it would be a “transit connection point,” a “fulcrum building,” with 37,000 square feet of public green space above. The transit and green space components merit the city’s $17.5 million investment of TID proceeds in the Couture project, he said.

The Couture is a “drop-dead beautiful building on what is one of the most blighted sites downtown.”

Marcoux said the TID would also benefit the 833 building now under construction to the west of the proposed Couture, which he says should open in late 2015 or early 2016. He also said the TID would benefit a proposed site for a major corporate headquarters that could be constructed at the end of E. Clybourn St., where an existing freeway ramp is in the process of being relocated, providing a site that would be “marketable across the world.”

He also said the Lakefront Gateway Plaza, which would tie all of these developments together, received 24 design submissions, an “astounding” response. Speaking of the designers who hope to submit plans, he said, “they see what we see … something great.”

“This is our Millennium Park,” he said of the site south and west of Discovery World, lying between E. Michigan and E. Clybourn streets east of N. Lincoln Memorial Drive. 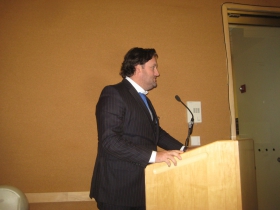 Rick Barrett, the developer of the Couture, said his Moderne project, the first modern high-rise west of the Milwaukee River downtown, is now 97 percent full, leading him to be optimistic about the opportunities for the Couture. “The lakefront has great bones,” he said, using a developer’s term for “location, location, location.”

Barrett also introduced Couture architect Matt Rinka, who said the most noticeable feature of the Couture will be its tower, consisting of a “series of concentric ellipses,” that will provide something new for the Milwaukee skyline, by “pushing boundaries of where urban design has been in Milwaukee.”

“I’m proud of the tower, but I am much prouder and more excited about the ground level” amenities, he said. A key part of that is the public space funded by the TID.

His design will “get people out of their automobiles and onto the lakefront as quickly as possible,” Rinka said. The concourse will “scoop people up,” not just to the lakefront but “for shopping, dining and living on-site.”

“It is surrounded by retail, but the center is the pedestrian walkway,” he said.

The project should “get Millennials excited,” along with “people looking to live in an urban environment. … This is what they’ve been looking for.”

The concourse is unique, he said, and may have only been possible at this site. “I challenge people to find something like this in any city,” he said, adding that he predicts the design will be studied by others.

Echoing the theme of Marcoux, Rinka said, “this is the front door to the city.”

Marcoux expanded his comments on the streetcar, emphasizing that the planned first stage of the project “can’t be a stand-alone system.” Instead, he labels it as the “Base System,” adding that “a successful starter system is the foundation for future route extensions” to the northwest side, south side, airport, Marquette University and the UW – Milwaukee. 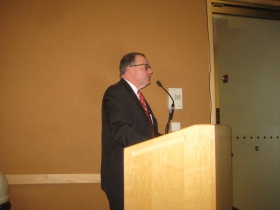 Marcoux countered the argument that Milwaukee lacks population density. In fact, it is the 14th most densely populated city in the country, with 6,239 people per square mile. Of the top 40 densest-populated cities, only three don’t have plans for a streetcar right now. All cities with more density have systems in place, with Milwaukee’s categorized as “under planning.” These other cities with streetcar systems compete with Milwaukee, he said — “including for public money.”

Marcoux said that after negotiations with the utilities and other stakeholders, the city will have to pay $22.7 million for utility relocation in connection with the construction of the streetcar. This is below the original $50-$75 million estimate.

Once construction is underway, the streetcar “debate will change from ‘how to stop this thing’ to ‘when does it come to my neighborhood?’.”

Marcoux gave a timetable for the streetcar. He said the vehicles will be chosen in 2015. “It doesn’t matter which company we buy them from; all will be sleek and modern.” The final design for the project will be completed in 2015, with construction beginning in 2015 and continuing to 2017, with the line being operational in 2018.

The streetcar budget will include existing federal funding, augmented by $9.7 million funding from the Cathedral Square TID, $31 million from the East Michigan TID #82, and $18.3 million of the extended Erie Jefferson TID #56, along with $10 million in future federal funds being actively sought by Mayor Tom Barrett.

Other Erie Jefferson TID funds will go to support infrastructure at the proposed Mandel Domus development, including a riverwalk.

Speaking of the riverwalk system in general, Marcoux said, “this tremendous transformation shows what can be done with judicious use of TIDs. It can bring a tremendous increase in tax base.”

Public comments included those from Patti Keating Kahn who called the streetcar “imperative for the city.” She is the owner of two downtown office buildings, and is the landlord for some 60 small businesses (including Urban Milwaukee). She said all of her tenants are in favor of the streetcar from what she knows. “The streetcar is critical to downtown Milwaukee,” she concluded.

Ken Kraemer of Building Advantage spoke in favor of the 1,160 union construction jobs expected from the Couture. “This is a home run for all of us,” he said.

Teresa Thomas-Boyd, a community organizer liked the plan because it “will help job and economic development.” She liked the “inclusivity” of the project, and the mandated 25 percent small business and 40 percent Residential Preference Program participation in the Couture term sheet, which also calls for a permanent easement for public access to the site amenities. “Let’s make ourselves a bit happier” with the good news of the development, she said.

Randy Crump said he has traveled to streetcar cities on vacation, and went to a streetcar convention in Utah, “on my own dime.”

There is a tremendous opportunity and need here, he said. “There is a hunger here for this in Milwaukee.”

Correction: The original story said the chairman Bill Schwartz was not present. The story has been updated as he was in attendance.