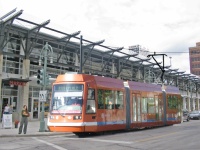 With the recent news of the federal approval allowing the City of Milwaukee to move forward on a modern streetcar system we thought it would be good to see what one of these systems might look like. A comparable system to what is being proposed in Milwaukee is Seattle’s 2.6 mile South Lake Union Line which launched in 2007.

A key factor that plays a role in the ridership levels of a system is the level of population density. Milwaukee’s population density of 6,214.7/sq mi compares closely with Seattle’s population density of 6,717.0/sq mi, and this level of support has allowed Seattle’s new line to serve more than 500,000 riders in its first year of operation exceeding the initial estimates. Although the Seattle line is slightly shorter than Mayor Barrett’s proposed route it has similar features in that it connects undeveloped areas near downtown to downtown with the goal of spurring economic development. Specifically the Denny Triangle is in an area of Seattle that although more developed than the Park East is in need of economic development and has apparently already seen development occur along the line.

To learn more about what may soon be coming to Milwaukee check out the video below: (If you have trouble viewing this video you can also see it on streetfilms)

Maybe in a few years we could have events like TRAMix. Check out the video below:

24 thoughts on “Streetcars Coming to Milwaukee”