Streetcar will be first leg of what he hopes will be a more extensive rail system. 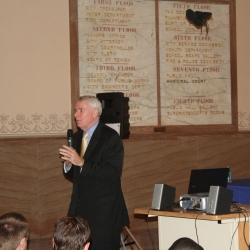 The Great Hall of the People took on a festive air on Monday, April 15th, when a group of several hundred young professionals gathered at the Young Professionals Week “Hangout” in the City Hall Rotunda to discuss “Sustainability in a Modern City,” a panel discussion – networking event of a sort quite popular these days.

The mayor made his way down from his office on the floor above, while the crowd milled about during a socializing session, eating free Tazino’s pizza and drinking very little of the free Blue Moon Agave Ale. Have you tried one?

The mayor’s remarks on the streetcar hinted at behind-the-scenes planning to expand the scope of the proposed streetcar. Delays, including interference from utilities and static from the AM radio airwaves, have left us the only one of the nation’s 25 largest cities without rail transit, according to the mayor. He asked the young people “to make history happen,” and the crowd gave its most enthusiastic response of the evening. Among those present were the streetcar’s principal aldermanic supporters, Bob Bauman and Nik Kovac.

However, the streetcar remained on its sidings until after Barrett brought up his #1 topic these days, namely the legislative attack on the city residency. Barrett enumerated many of the points found in our story, “How to Crush Milwaukee” in Urban Milwaukee in February.

It bugs the mayor, he said, when a public employee (usually a cop or fireman) says to him, “I have to live in the city.”

Barrett said the move to end the residency law, in place since 1938, was prompted solely by police and fire department factions. But, he noted, there had been only a handful of voluntary separations from those departments, while there were 5,270 applicants for 100 jobs in the departments, both of city residents and those willing to move here.

Barrett also hinted at a possible behind-the-scenes legal development in the situation, calling ending residency requirements a “policy act that has no place in the budget [bill].” This could be an arguable issue before a court of law, should the legislature prevail.

The city has laid out its argument against including the residency provisions in the budget bill in an 8-point  memo from the Intergovernmental Relations Division of the Department of Administration.

According to the memo, “Right now, our goal is to ask members of the Joint Committee on Finance to recognize the provision as non-fiscal policy and to require that it be heard through the regular legislative committee process.”

ABOUT THE “TROJAN HORSE”

Then-County Executive Scott Walker was the first to call Barrett’s plan “really just a Trojan Horse for light rail” in 2007, when Barrett outfoxed him in securing the greater share of a decades-old federal transit appropriation. Barrett himself was quoted as using the “Trojan Horse” analogy in a September 2009 Urban Milwaukee article announcing the proposed routes for the system, where he adopted the term for his own purposes. (The article was written by Urban Milwaukee president Jeramey Jannene, who hosted the panel discussion at The Hangout.)

At around the time of the City Hall event Monday, an Amtrak locomotive was hauling a 13-car Milwaukee-built passenger trainset to the Pacific northwest, where it is to be put into the Cascade service between Portland, Seattle and Vancouver. [See Urban Milwaukee Facebook photo.] The trainset was one of four assembled at the Talgo facility in Century City. Talgo is now suing the State of Wisconsin over its failure to pay for two trainsets that Talgo substantially completed under a contract with the state. [See “Did the State Screw Talgo?” Urban Milwaukee, May 2012.]

WILL WALKER BE ABOARD CHINESE BULLET TRAIN?

At the time of this writing, Governor Walker is in China where he is leading a trade mission from April 13-21. The conference includes Milwaukeeans Dean Amhaus of the Milwaukee Water Council, Tim Sheehy of the Metropolitan Milwaukee Association of Commerce and Ed Moreland, head of government affairs for Harley-Davidson, who opened a new dealership in Tianjin China Tuesday, with Walker appearing on a Hog. [photo] Participants paid $7,075 to join the delegation.

The tour delegation will split up Wednesday, and regroup Thursday, according to a schedule for the event, with some traveling to  Shanghai by air from Harbin, while another group will travel from Hefei to Shanghai by rail. The governor’s office did not respond to an e-mail request from Plenty of Horne asking if Walker will be on the train, which covers the 465 kilometer distance in 3 hours, or about 96 miles per hour.

When Sue Black was named CEO (and later owner) of the Milwaukee Wave Indoor Soccer Team earlier this year, she said that one of her priorities was its “Milwaukee Wave of Hope” charity, a 501(c)(3) corporation. Indeed, the foundation was mentioned as one of the assets Black purchased when she bought the team from Jim Lindenberg.

So what is the “Wave of Hope?” It consists of several programs, including “Making Waves,” described in its website as “the largest, multifaceted, multimedia community outreach program by a professional sports team in the state.

“In 2009, the Milwaukee Wave soccer players went to more than 100 Wisconsin schools and approximately 23,000 students, teachers, administrators and family members.”

The charity also provides 100 tickets to each Waves home game to local organizations.

Gifts to the foundation totaled $89,768 in 2011, the most recent year for which information is available. An additional $40,649 was raised from a charity dinner and a golf outing. Disbursements, mostly to children’s charities, totaled $130,653.

The 10th annual Lynde and Harry Bradley Foundation Prizes will be announced over the next 3-4 weeks, according to Terri Famer, Vice President for Administration of Wisconsin’s largest foundation, with $574 million in assets.

The conservative-leaning organization awards up to four $250,000 prizes annually, usually to winners who don’t need the cash. Past “innovative thinkers and practitioners whose achievements strengthen the legacy of the Bradley brothers and the ideas to which they were committed” include Edwin Meese III, Jeb Bush and George F. Will, the Washington Post columnist who is also a member of the foundation’s board of directors.

The Bradley Foundation spends heavily in its “Bradley Legacy Civic Identity” giving, donating millions of dollars annually to non-political civic groups in Milwaukee like its orchestras, museums and charities and to private colleges in Wisconsin.

But the great majority of the 2011 $34 million in grants paid were in such areas as “Civil Society,” “Law and Society,” “National Defense and Foreign Policy,” “Public Discourse,” and “Public Policy Research.” The foundation has long been the biggest funder of conservative policy making in the nation.

The foundation has already booked the Terrace Theater at the Kennedy Center in Washington D.C. for 90 minutes on Wed., Jun. 12, 2013, for the celebration of its prize winners. Party starts at 7:30 p.m.

The Milwaukee Messenger Invitational XII is set to hit the streets at “High Noon, 4/20, Milwaukee” according to the Eric von Munz-designed t-shirt for Milwaukee’s longest-running alleycat bicycle race. As usual, there won’t be an empty sofa or futon from Bay View to Riverwest as messengers come in from out of town on what might be a rainy day. The race originates from the downtown headquarters of Breakaway Bicycle Courier, which is to say the alley behind 224 E. Wells St., in the Century Building. The pre-party will be Friday evening at the Uptowner, 1032 E. Center St., hosted by DJ Armahn “The Hammer” Gonz.

…Hundreds of hungry folks descended on the Italian Community Center, 631 E. Chicago St. Sunday, April 14th for the 18th annual “Taste of Italy.” The event offers dozens of stations of Italian specialties prepared by volunteers from the many Italian social organizations in town, including the Societa di San Giuseppe, which offered three different soups served up by Judge John DiMotto and other members. This annual event is one of the best deals in town, with 7 tickets, good for food and drink, for only $10. …The Milwaukee Brewing Company is in the process of installing solar panels [photo] on its roof that will reduce energy costs by 27 percent. …Despite the terrible muddy conditions, work continues on the foundation of the 14-unit WiRED Properties development at 1530 N. Jackson St., with workers from Hunzinger Construction putting in some weekend hours to keep the project on schedule. … Dan Fitzgibbons got committee approval Tuesday for his proposed tavern “The Curve,” 1634 N. Water St. Among the entertainments checked off on his license: “Wrestling, comedy and poetry.” Quite a combo.

“I think they will go well together,” Fitzgibbons tells Plenty of Horne.

What kind of wrestling?

How about Beer Pong?

“They didn’t have a category for that,” he said.

A special fundraising event is scheduled for Milwaukee’s Comedy Cafe, 615 E. Brady Street, April 26th, for the benefit of Milwaukee Police Sergeant Sebastian Raclaw, who has stage 4 cancer of the abdominal cavity, a rare diagnosis. The 35-year old Raclaw is not accepting personal donations, but has established a foundation through the Medical College of Wisconsin to support research into this disease. Admission is $10 at the door. A 6 p.m. show has been added to the event, details here.