Will Streetcar Help The Inner City?

A rendering of the streetcar coming up Broadway.

One charge made by critics of the Milwaukee streetcar project is that it won’t help inner city residents. Are they right?

The current issue of Milwaukee Magazine has an article by Barbara Miner with a series of interviews of residents of ZIP code 53206, the area bordered by North Avenue on the south, the I-43 and 17th St. on the west, Capitol Drive on the north, and 27th Street on the west. Miner chose it because it’s “often dismissed as the poorest and most troubled neighborhood in Milwaukee.”

The story’s dominant theme is the devastation that resulted from the loss of manufacturing jobs, including Tower automotive and the other factories that once operated along Capitol Drive and the 35th Street Corridor.

The 53206 neighborhood has also come under considerable statistical study, including a recent report from Marc Levine of the UWM Center for Economic Development entitled Zipcode 53206: A Statistical Snapshot of Inner City Distress in Milwaukee: 2000-2012. Earlier, Lois M. Quinn of the UWM Employment and Training Institute, authored a report entitled New Indicators of Neighborhood Need in Zipcode 53206.

This loss of manufacturing jobs is not unique to Milwaukee. It occurred in most other American cities, especially in the industrial Midwest. It seems to have two main causes: globalization and a growing “spatial mismatch” between jobs and potential workers. 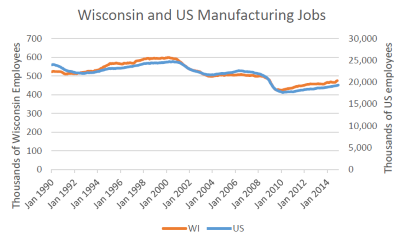 Wisconsin and US Manufacturing Jobs. Click image to enlarge.

Globalization has meant that manufacturing jobs have moved out of Wisconsin and overseas in search of radically lower wage rates. The spatial mismatch reflects the fact that new factories are often built away from cities where land prices are cheap, large parcels can often be put together by buying one or two farms, and there is no need to clean up after a previous industrial user.

A 2011 Brookings Institution study looked at the spatial mismatch between low-skill job opportunities and welfare recipients in four metropolitan areas: Chicago, Los Angeles, Cleveland, and Milwaukee. All four showed the same pattern: large centers of low-skilled jobs far away from neighborhoods where the potential workers lived. But Milwaukee and Cleveland fared slightly better: “The distance between low-skill jobs and poor female-headed households seems greatest in LA and Chicago,” partly reflecting their greater size, the study noted. In most cases these job hubs were impossible to reach by public transportation.

Brookings published several reports on this issue in the 2011-2012 period. Milwaukee fared surprisingly well compared to other metropolitan areas. Among the largest 100 metropolitan areas, it rates in the middle in the share of working-age residents with access to transit, 8th in the share of jobs accessible within 90 minutes via transit, and 14th on a combined score for job access.

In December 2013, Milwaukee’s Public Policy Forum published a study of the difficulties of reaching suburban job hubs here. Again, most were impossible to reach by public transportation. While most of Milwaukee county was well-covered by public transit, that was not true of Oak Creek and Franklin where the only services were aimed more at suburban residents commuting downtown than at Milwaukee residents holding jobs in those cities. Likewise the only service to Ozaukee County was aimed at students attending MATC and stopped in the summer. Waukesha County transit served a limited part of that county, mostly in and around the city of Waukesha. To use It, Milwaukee County transit had to transfer at Brookfield Square, leading to very long commutes.

The PPF report concluded by examining three possible new routes: between Oak Creek and Mequon via downtown, an express route from UW-Milwaukee via downtown to Brookfield Square, and a third to the Westridge Business Park in Mequon. The first proposal was estimated to cost an additional $540,000 per year, the second about $1.25 million per year, and the third $635,000. Thus all would require additional financing.

The PPF listed some of the obstacles to route expansion to reach suburban job hubs. Notably many suburban industrial sites were isolated from other land uses that generate transit riders, so the routes were unable to generate sufficient ridership, making this impractical. Though federal funding might be available, the routes would be difficult to sustain once that funding ran out.

Some opponents seem under the impression—or are deliberately spreading the misinformation—that funds for the streetcar would be available for suburban bus routes if the streetcar were not built. This delusion seems to be shared by Lawrence Hanley, the International President of the Amalgamated Transit Union who writes from Washington, DC, to oppose the streetcar even though it “will undoubtedly create many jobs for our members.” Instead, he argues that “your resources would be more wisely spent on the expansion of your bus network.“

It appears that Hanley has cribbed a page from the Scott Walker playbook. When cancelling the train to Madison, Walker argued to Transportation Secretary Ray LaHood that he should be allowed to spend the money on highways. Of course, LaHood could not legally do so, even if he had been so inclined. Instead the money went to other states.

A second solution, allowing workers to live closer to the jobs, seems even less likely in the foreseeable future, given the widespread hostility to affordable housing among Milwaukee’s suburban neighbors. 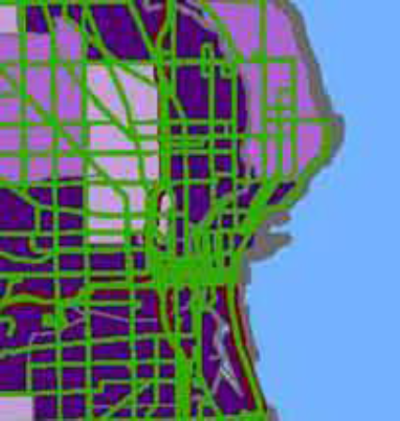 Map of Jobs by ZIP code, and transit lines.

That would seem to leave only one strategy: increasing jobs in areas already well served by public transportation, so that people living in ZIP codes like 53206 can travel to them. The Public Policy Forum report includes a map of ZIP codes in the metropolitan area color coded according to the number of jobs they have. Superimposed on this map are bus routes, shown in green.

To the right is the section of the map that includes 53206 and downtown Milwaukee. 53206 is the pale rectangle to the northwest of downtown. Its pale color reflects the small number of jobs in the neighborhood—about 2,000, compared to about 14,000 residents between 20 and 64. Most of its residents must look elsewhere for jobs.

The best solution would be jobs within the 53206 neighborhood or the adjacent 35th street corridor. A start was the Talgo train project on the former Tower property, but that was killed by Gov. Walker and the state legislature.

However, a major asset of the 53206 neighborhood is its coverage by public transport (the green lines in the map), offering quick trips to Downtown.

In their search for employment, residents of 53206 spend much more time traveling than do other Milwaukee or suburban residents, according to numbers developed by Marc Levine. Only slightly over 2 percent of those living in 53206 find jobs within that ZIP code. By comparison, about one-quarter work in one of the four downtown ZIP codes.

The question then is whether people living in 53206 and similar neighborhoods benefit from a streetcar system that at the start is limited to Downtown. This answer depends on two other questions: Would the streetcar promote more activity Downtown? And would the residents of 53206 benefit from this activity?

On the first question, predictions about outcomes are always tricky, but there is considerable evidence that it would. It would tie together the downtown area in a very public fashion, allowing office workers to go to restaurants without worrying about parking (full disclosure: I plan to use it to get from my office at the northern edge of the route to a coffee shop in the Third Ward). At least two development projects appear contingent on the project. The very fact that it would be funded by incremental property taxes implies an increase in property values resulting from greater activity downtown.

In preparing a previous article I discovered that West Coast companies were trawling the Midwest for places to expand that had neighborhoods similar to those in their home cities. The only places in Wisconsin that passed the screen turned out to be in Milwaukee County. The streetcar would strengthen that appeal.

On the second question, it is important to recognize that a more dynamic Downtown will require people in a wide variety of occupations, not all with advanced degrees. The trick will be to make sure there will be mechanisms to connect the residents of 53206 to those opportunities. But the data indicate that the success of 53206 and Milwaukee’s downtown are already closely linked.

7 thoughts on “Data Wonk: Will Streetcar Help The Inner City?”