In an unexpected move, Walker helps avoid messy situation between city and county. 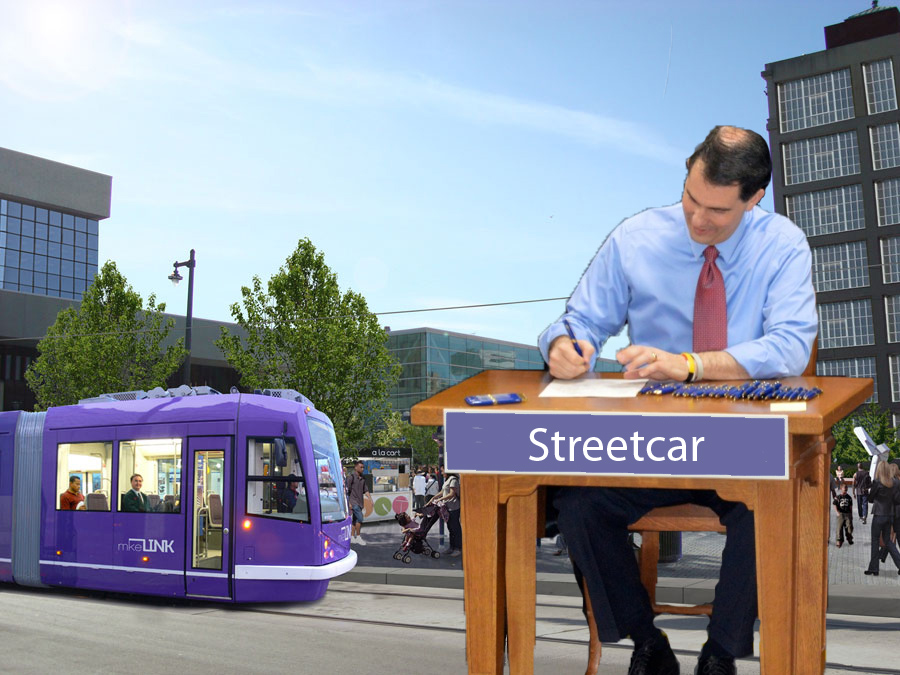 Scott Walker and the Milwaukee Streetcar

In an unexpected twist to a seemingly never ending saga, Governor Scott Walker has actually come to the aid of the Milwaukee Streetcar project. The Governor has issued a partial veto of legislation that could have had a number of unintended consequences for the city and county.

As Matthew Taub of the Daily Reporter first reported, Rep. Dale Kooyenga (R-Brookfield) had a provision inserted into the state budget that was intended to insure that the city, not the county, pays for the operation of the streetcar. As I wrote last week, this has always been the stated intention from the office of Mayor Tom Barrett. My concern was that the language opened the door to the county billing the city for any decline in revenue resulting from a reduction in transit system ridership.

Similar to the concern I raised, Walker found the provision overly broad and used a Wisconsin governor’s powerful “Frankenstein veto” to clean up the language. The partial veto doesn’t alter language assuring  the city must pay to operate the streetcar, but eliminates potentially unintended consequences of this provision’s broad language.

Walker’s reason for vetoing the bill according to his veto message: “I am partially vetoing this provision to remove the phrase ‘or accommodation’ because I object to the inclusion of ambiguous language that may have unintended consequences. I am also removing this phrase because it is unnecessary as the intention of the provision may be achieved without the inclusion of this ambiguous phrase.”

Here is the provision’s text with the phrase now stricken from it in bold: “This provision directs that a county with a first class city may not incur any direct or indirect expenses, or forfeit revenue, related to the operation or accommodation of a rail fixed guideway transportation system in the first class city unless those expenses or revenues are reimbursed by the first class city.”

Walker will announce his candidacy for the Republican nomination for President tonight at an event in Waukesha County. He is widely expected to use a number of items from the budget in his stump speech, but don’t expect him to reference this veto.

As previously reported, the new anti-streetcar petition to have a referendum on having referendums will not impact the already approved system. Construction on the $123 million first phase and lakefront extension is scheduled to start in October.