Eleven out of 15 aldermanic districts, and 76 percent of all respondents support the proposed streetcar starter system.

Eleven out of 15 aldermanic districts, and 76 percent of all respondents in the city support the Milwaukee Streetcar. This is according to tabulated results of a Common Council and Mayor contact form we’ve put on our website that allows individuals to voice their opinion on the project.

The city’s Legislative Reference Bureau (LRB) went through the data we have been regularly sending to map and tabulate the results by district. As of January 20th at approximately 5 p.m., 2,937 contacts had been made, with LRB verifying 1,886 of them as valid city addresses (a number were from out of the city, a small amount were not an accurate address and just a couple were duplicates).

Beyond the promotion we have given to the form, groups both for, against and neutral on the project have encouraged their members and customers to fill out the form.

Alderman Robert Bauman praised the Urban Milwaukee information in a January 8th interview with my colleague Bruce Murphy, noting “It’s the most effective communication format I’ve seen in all my years here in City Hall.”

Streetcar opponents have criticized the form for opening with the “Yes” radio button automatically selected. But this has not prevented over 700 total submissions in opposition. The vast majority of submissions have used a custom message, some of great length, to state their case either for or against the streetcar. Certainly, the data does not provide a scientific sampling of voters, but it does provide insight into the feelings of citizens with the strongest views, both pro and con.

Breaking Down the Data

Responses were not uniformly spread across the city, with council members Ashanti Hamilton (10), Joe Davis (11), Willie Wade (10) and Robert Puente (16) each receiving less than 20 responses. On the flip side, council members Nik Kovac (567), Bauman (323) and Tony Zielinski (298) each received well over 200. Council members Kovac, Milele Coggs, Jose Perez and Zielinski received contacts from citizens of which more 80 percent were in support of the streetcar. Only Joe Dudzik received contacts less than 40 percent in support. 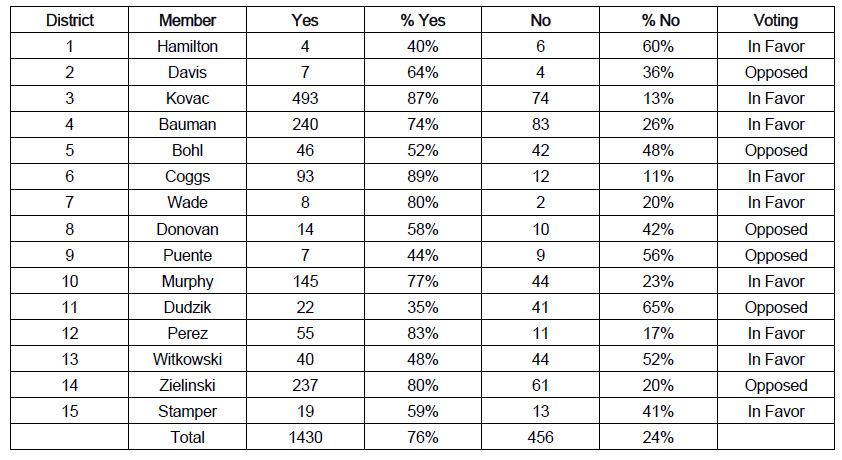 This may be the most interesting district in the city on this issue. Ald. Tony Zielinski has repeatedly stated that he will vote the way his district feels on the project and he has opposed it. But the return of contact forms from people in his Bay View district to date shows that 80 percent are favor the streetcar. As I reported Tuesday, two streetcar supporters announced their intent to push for an extension of the starter system to the airport that would bypass Bay View. That may up the stakes for Zielinski, putting him in a tougher position with constituents who favor the project and want a connection to Bay View.

Two maps were prepared by the Legislative Reference Bureau that map form responses. Predictably, they indicate greater support for the system closer to the proposed starter route and proposed future extensions. 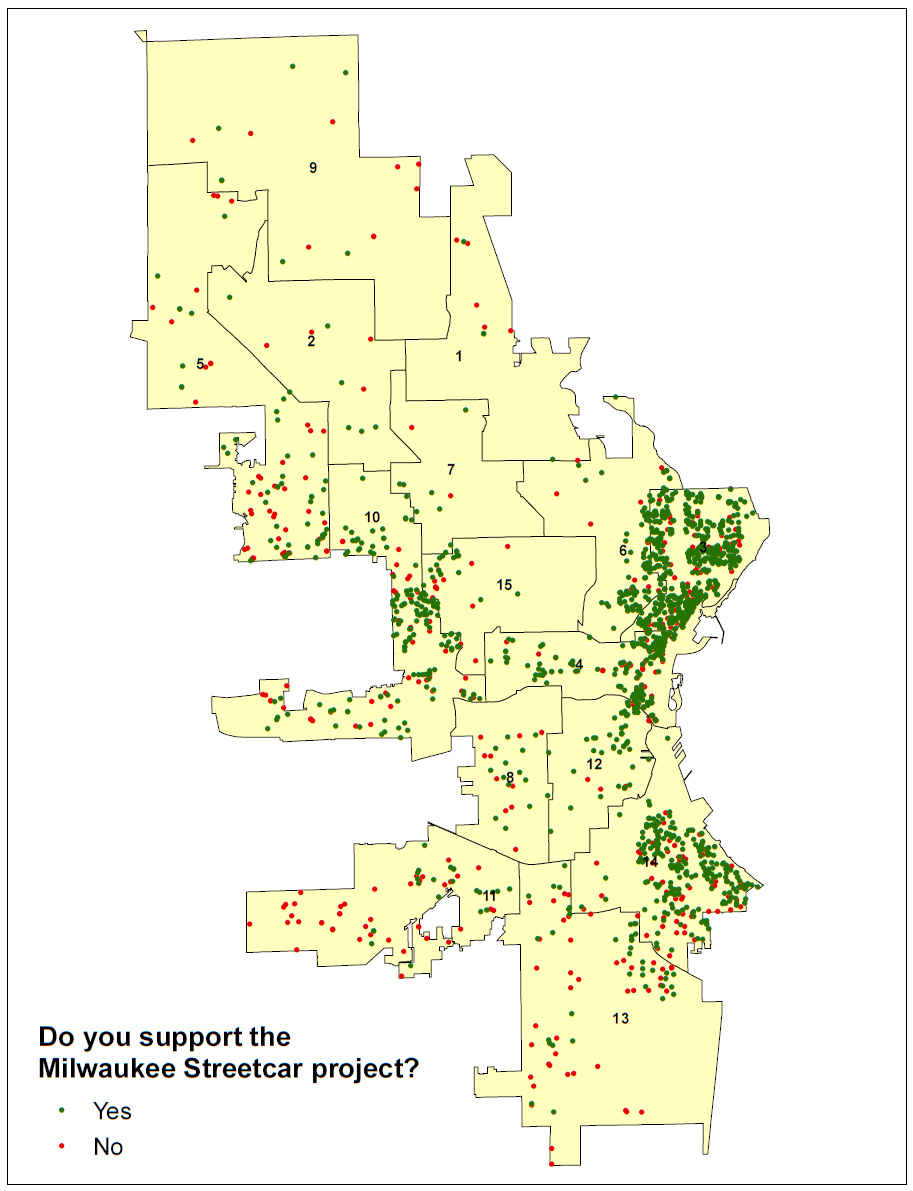 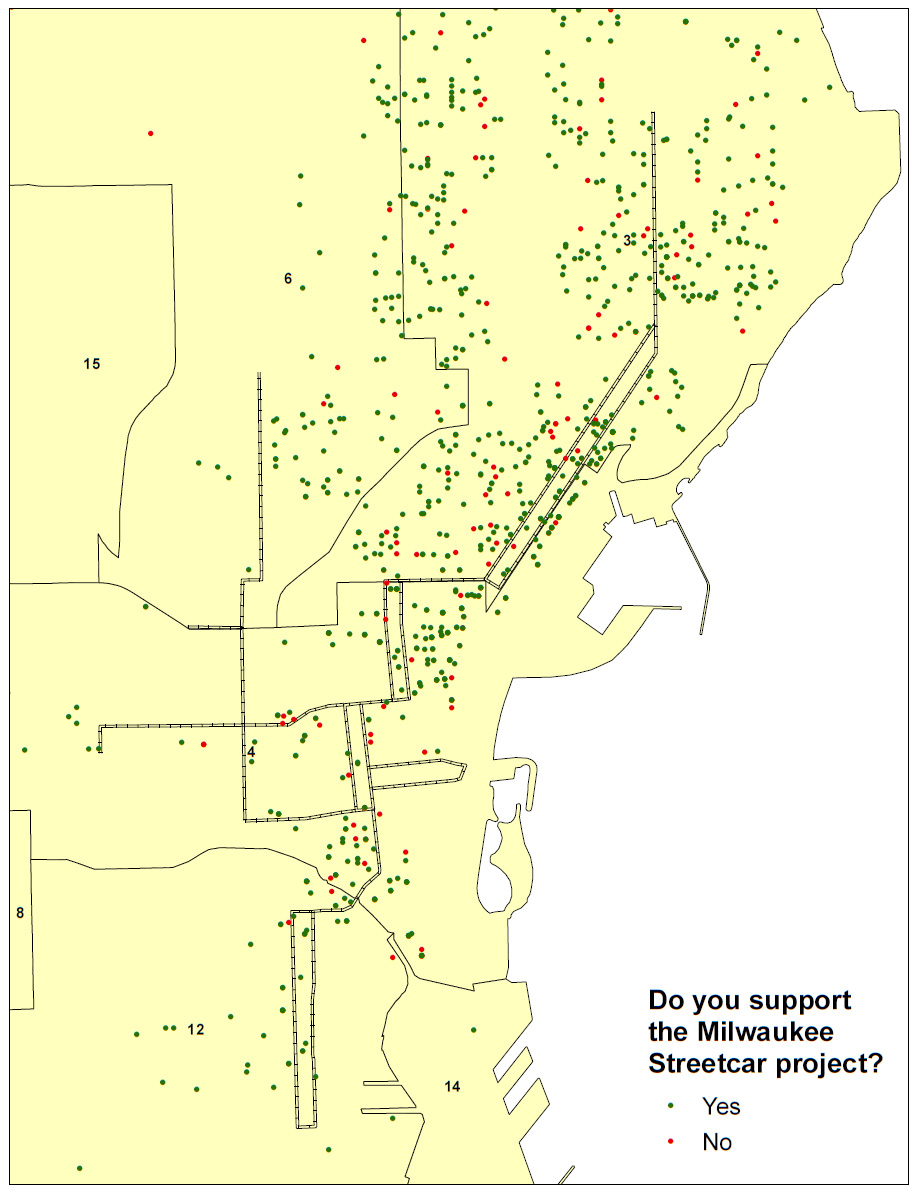 Full report from the Legislative Reference Bureau. Please note that the mapping does not include all contact to the offices of the Mayor or council members, just those contacts that came via the Urban Milwaukee – Take Action on the Milwaukee Streetcar Form.

As we reported on yesterday, due to a rarely used parliamentary procedure, the final vote on the streetcar system was held until February 10th. You can still use our form to contact the council and mayor.