UPDATE: The guide described below is now live on MilwaukeeDowntown.com.

It’s about to get a lot easier to find underutilized land or vacant commercial space in Downtown Milwaukee. Milwaukee Downtown, a self-taxing business improvement district, is producing a Milwaukee Streetcar Development Guide under the direction of the BID’s economic development director Matt Dorner. Dorner unveiled a draft of the plan at a meeting of the streetcar implementation committee this morning and plans to publish the guide on the BID’s website later today.

The guide was made following similar efforts in other cities that have recently built streetcars, including Atlanta, Kansas City and Tucson. It will highlight approximately 50 acres of land that the district has labeled as underutilized, as well as a number of vacant commercial spaces. It will be targeted at developers, real estate brokers, potential tenants and existing property owners. Describing how it might be used, Dorner offered the example of a company interested in being located near the stop at the Milwaukee Public Market, that could look at the website and quickly see all space available for lease.

According to Dorner, the final product will be a section on MilwaukeeDowntown.com that includes site profiles, proximity mapping to streetcar stops, and a construction timeline. As part of their efforts, the city will link to the guide from multiple areas on their website. A paper guide will also be produced, a draft of which is included below. The BID intends to use third-party service OppSites to map development opportunities on the website.

Department of City Development commissioner Rocky Marcoux expressed support for the guide, noting that it lends credibility because it’s not coming directly from city government. The involvement of Milwaukee Downtown “speaks volumes” about the streetcar project, and they’ve done an “incredible job… helping us politically and practically in moving the streetcar forward,” Marcoux declared. He noted that the involvement of the BID signals that some of the biggest employers in the city, including Northwestern Mutual and Johnson Controls, are on board with the streetcar. As for the new guide itself, Marcoux predicted “everyone will use it” and praised its universal appeal, noting it will help everyone from brokers and developers to existing property owners and entrepreneurs.

Milwaukee Downtown’s membership is constituted of downtown commercial property owners that have elected to tax themselves. The BID coordinates a wide number of events and programs including Downtown Dining Week, Downtown Employee Appreciation Week, the summer trolley loop, the Public Service Ambassadors and graffiti removal crews. The organization is led by CEO Beth Weirick. 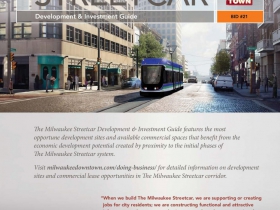 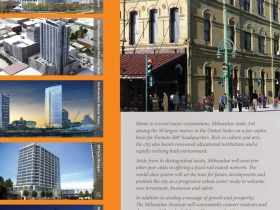 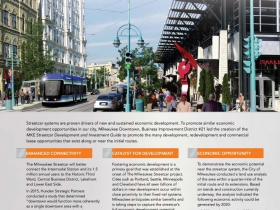 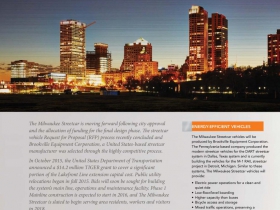 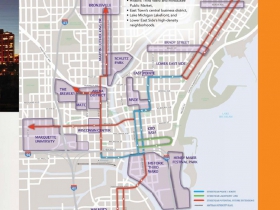 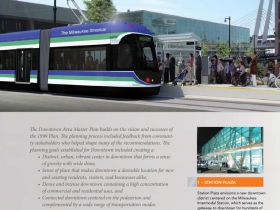 The official Milwaukee Streetcar groundbreaking is expected this spring. Marcoux noted that Mayor Tom Barrett will hold an event at an “appropriate time.”

What’s in the way? As Tim Clancy of the Concord Group detailed in his progress report at the meeting, much utility relocation works remains, but things are progressing on-schedule and on-budget for service to begin in 2018. The city, through private contractors, completed a substantial amount of Milwaukee Water Works infrastructure relocation in late 2015 and will wrap up their work in the spring. In addition, Clancy noted that he expected to receive a final budget and plan from We Energies in the next 30 days for their relocation work. According to Clancy, We Energies has applied to the Public Service Commission to get the regulatory approvals needed to relocate their lines and is negotiating a final agreement with the City Attorney’s office. Additional agreements will be signed soon with the telecommunications companies that have relocation needs.

Clancy noted in his presentation that $9.1 million has been spent so far out of the project’s $123 million budget. The lakefront extension, which received a federal grant to complete its funding in October, is scheduled to be at 30 percent design completion in the next 30 days.