Video released as part of complying with 11 directives issued to Chief Alfonso Morales. 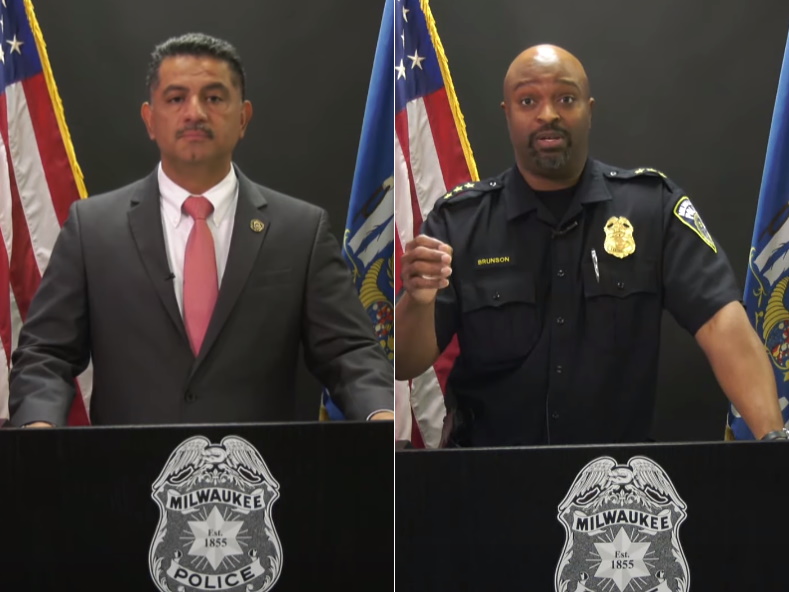 In a 21-minute video response to one of the 11 directives given to Milwaukee Police Chief Alfonso Morales by the Fire & Police Commission, the department gives justification for its use of tear gas, pepper spray and smoke. It used chemical agents six times between May 29th and June 23rd.

“A peaceful civil disturbance does not exist,” Morales says in the video.

A commission-approved standard operating procedure (SOP) says a civil disturbance is any group that has unlawfully assembled where there is the potential for collective violence, destruction of property or unlawful acts. “These are typically, but not always, spontaneous occurrences requiring the emergency mobilization of police forces and related emergency services,” according to the SOP.

Assistant Chief Michael Brunson narrates the video after a brief appearance by Morales. Brunson directs the department’s major incident response team (MIRT) and walks through each of the uses of chemical irritants, including CS gas (tear gas), OC gas (pepper spray) and smoke.

The first incident occurred on May 29th at 11:30 p.m. when a crowd, including many in vehicles, gathered outside the department’s District Five Station at 2900 N. Vel R. Phillips Ave. “There were bricks, bottles and fireworks that were being thrown at officers. There were multiple shots fired from across the street in a lot. And there were a number of citizens that tried to rush towards the building while making threats towards officers,” said Brunson. He said no citizens reported injuries from that night, but one officer was shot in the foot and another was hit in the head with concrete. Tear gas and pepper spray were used.

The second incident occurred on May 30th at 11:30 p.m., the first night of the city’s curfew. A crowd had gathered outside of the department’s District Seven Station at 3626 W. Fond du Lac Ave. He said reckless driving and blocking of traffic lanes was observed. “They were also throwing, rocks, bottles and projectiles at officers,” said Brunson. “Less lethal munitions” (commonly called rubber bullets) were used, as was smoke, but no tear gas said Brunson. No citizens reported being injured, one officer suffered a dislocated shoulder. “The crowd eventually dispersed after being there for several hours.”

The third incident occurred on May 31st at 11:40 p.m., the second night of the city’s curfew, outside the department’s District Five Station. “The crowd estimate that night was 1,500 people, both on foot and in vehicles,” said Brunson. He said individuals climbed atop the nearby Burger King, and others had started fires. “There were individuals that attempted to break through the police line that was there.” Officers dispersed “chemical irritants” at that time, Brunson said. No citizens reported being injured to the police department, no officers were injured in the incident.

The fourth incident occurred on June 2nd at 7:00 p.m. at the intersection of N. 6th St. and W. McKinley Ave. Protesters at the scene have asserted that the police department escalated the conflict after an officer fell off his bicycle. Brunson said citizens were throwing rocks, bottles and asphalt at officers. He said the crowd refused to disperse after being told it was an unlawful assembly. Pepper spray, smoke and less lethal munitions were used.

Brunson does not provide a list of citizens or officers that were injured in the incident. One individual, Cameron Murdoch, is expected to sue the city as a result of the altercation, video shows an officer’s knee on Murdoch’s neck and Murdoch provided photos to Urban Milwaukee of injuries he sustained.

The department said a “Molotov cocktail” was thrown at officers and later sent to a federal Alcohol, Tobacco, Firearms and Explosives (ATF) lab. The department has not provided an update on the status of the alleged cocktail, which did not ignite or explode, since it announced it was sent to the lab in early June.

The fifth incident occurred on June 4th at 3:20 a.m. outside of the District Five Station. The crowd was estimated by police at 100 people and 20 vehicles. “They were throwing rocks, bottles and fireworks at police personnel,” said Brunson. He also said gunshots were fired. A vehicle hit one citizen and two officers, causing injury to all three, then fled the scene but was later arrested. Smoke was the only chemical irritant used in the situation.

The sixth incident occurred on June 23rd at 4:00 p.m. outside a home near N. 40th St. and W. Lloyd St. The police department estimated a crowd of 250 to 300. “First of all they responded without their armor to present a soft approach,” said Brunson. In a Facebook video from Frank Nitty officers can be seen walking away from the house. Then, off camera, multiple fires are intentionally lit. They result in the house and an adjacent vehicle becoming engulfed in flames. “MIRT officers returned and tried to get control of that particular scene.”

Nitty can be seen on video trying to deescalate the situation, when an officer and an individual in the crowd become physically engaged. “You have the police here chilling with no problem and you have the police 10 feet away shooting people,” said Nitty in his video. Nitty, at the direction of Office of Violence Prevention director Reggie Moore, was able to lead the crowd away.

A crowd later returned to the house at 11:30 p.m. and attempted to light the house on fire again. Tear gas and smoke were used in the incident, including during the daytime.

Eight officers were injured that day. At least one citizen was injured in the incident as was captured in Nitty’s video. Brunson does not address any citizen injuries, but said the responding officers showed “a lot of restraint” based on the behavior of those at the scene. At one point in Nitty’s video the activist, who was repeatedly encouraging the crowd not to engage with the police, catches an individual pulling a gun and firing at a moving vehicle after being denied access.

“In many of these incidences there were attempts to quell the crowd,” said Brunson. He said behavior that would cause injury to citizens was observed and that ShotSpotter, an automated system that tracks gunshot sounds and attempts to locate the incident, recorded a 300 percent activity increase. “This was a very dangerous period of time for the citizens of this community and the members of the police department.”

“The Milwaukee Police Department has absolutely no problem with peaceful protesters and we do not use chemical irritants towards peaceful protests,” said Brunson. “We encourage people to exercise their rights, but we want them to do it within the confines of the law.”

One of the 11 directives issued July 20th prevents the department from using tear gas and “large volumes” of pepper spray. A number of the over 100 law enforcement agencies that have pulled out of a partnership to secure the Democratic National Convention have cited the policy as a reason for their withdrawal. “I can not send personnel if they are not properly equipped or will not be allowed to engage in appropriate actions which would ensure their safety,” wrote Franklin chief Rick Oliva in a letter.