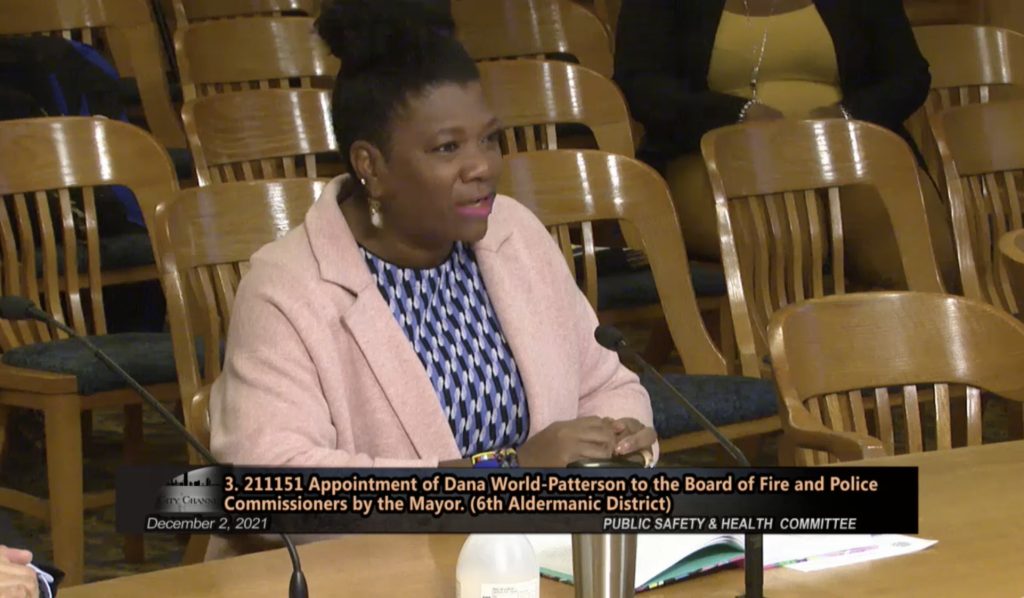 The commission, billed repeatedly as the most powerful of its kind in the country, is responsible for hiring, firing, discipline and policy setting for the Milwaukee Police Department and Milwaukee Fire Department.

“My other day job is the eradication of human trafficking,” said World-Patterson to the committee on Thursday morning. “Every day I have the opportunity to strengthen women and girls. That’s my life calling. I love it.”

Her nonprofit organization, Foundations for Freedom, was awarded a forgivable city loan earlier this year to redevelop an eight-unit, city-owned apartment building into a temporary home for women victimized by human trafficking and forced to perform commercial sex acts.  She also serves as a mayoral appointee on the Milwaukee Commission on Domestic Violence and Sexual Assault. World-Patterson is the chair of the Human Trafficking Task Force of Greater Milwaukee.

World-Patterson, 59, said her father was a police officer. “I know what it feels like being that child wanting your father to come home every day,” she said. She currently lives with her family in the Borchert Field neighborhood.

Her new part-time gig, should she be confirmed, would come with a five-year term and $6,600 per year. She said the Thursday evening meetings would work well with her continuing education in mental health counseling.

“My role as a commissioner is to offer the best insight I have with the facts,”  said World-Patterson in response to a question from a community member. “I am not interested in being silent and falling into the woodwork.” She said she also had much to learn about the role.

Get a daily rundown of the top stories on Urban Milwaukee
Alderman Scott Spiker asked how World-Patterson would link her work with human trafficking to her role on the commission.

“Training,” said World-Patterson. “The more you know the more you will see.”

She said she has seen the benefits of enhanced training when working with law enforcement officers. “They were so tunnel-minded in their endeavors that they missed a lot,” said World-Patterson.

“I want to thank the mayor, this is an outstanding appointment,” said Ald. Mark Borkowski. “We as a city are very fortunate to have you.”

“Mrs. World-Patterson will bring an important perspective to the Fire and Police Commission with her understanding of crime victims and the role of public safety agencies in protecting vulnerable individuals,” said Mayor Tom Barrett in a November statement announcing the nomination.

“When I saw her name came up for her this appointment, I said ‘that makes sense,'” said Ald. Chantia Lewis. “She is one of those rare people that is very just ingrained in the community.”

“I think she is going to add tremendous value to the city of Milwaukee and everyone who needs service and help from the Fire & Police Commission,” said Ald. Jose G. Perez. He said he has known World-Patterson for years.

World-Patterson would replace Ann Wilson, who has served with an expired term since 2018 and lived outside of the city for more than a year while her term had lapsed. The Common Council rejected Barrett’s reappointment of Wilson in March as a show of frustration with the FPC’s botched demotion of police chief Alfonso Morales. But under the law, Wilson continues to serve until a replacement is found or she resigns. Barrett’s chief of staff first said a replacement was being considered in June, while council members grilled the administration for moving too slowly.

The human trafficking victims advocate would be the seventh member of the commission. She would join a slate of 2021 appointees: Amanda Avalos, LaNelle Ramey, Joan Kessler and Edward Fallone. Barrett, who also expressed frustration with the Morales debacle, has replaced all commissioners who voted for the former chief’s demotion as their terms expired, with the exception of Wilson. The other remaining members, Everett Cocroft and Fred Crouther, have terms that last until at least 2024.

Todd, who serves as the board’s non-voting secretary, was first appointed in January. His appointment increasingly marks a turning point for the commission, which had been beset by infighting, an ethics investigation, the Morales debacle’, deadlocked votes and understaffing.

“The ship seems to be righted,” said Borkowski.

Borkowski ended up chairing the committee meeting in an unexpected manner. The chair, Ald. Marina Dimitrijevic, was excused. Lewis, the vice chair, was removed from her committee posts while her criminal case plays out in court (she can and has continued to participate in meetings and vote with the full council). Borkowski served as chair and Spiker and Ald. Khalif Rainey provided the other two votes necessary to achieve quorum.

The full council will consider World-Patterson’s nomination on Dec. 14.