Norman has served as acting chief since Dec. 2020 while city sorted out botched Morales demotion. 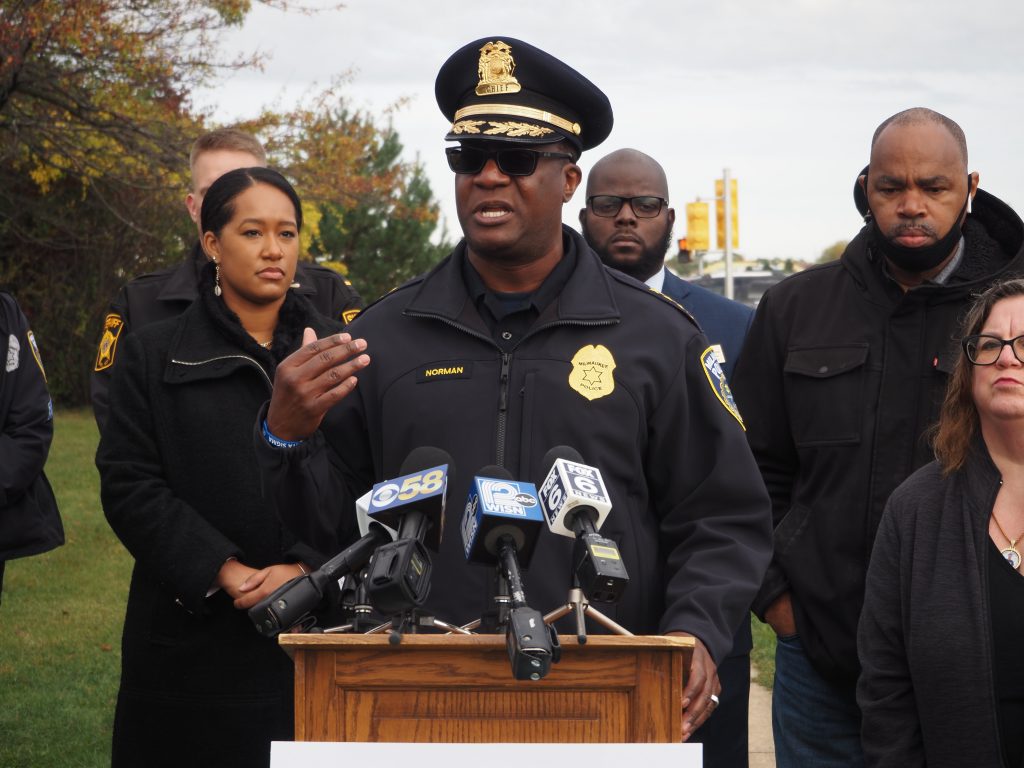 The seven-member Fire & Police Commission voted unanimously to give Norman, who has served as acting chief since late December 2020, the job officially. He will receive a four-year contract.

After each of the seven commissioners spoke in favor of Norman and repeatedly praised his collaborative leadership style, the chief appeared to be fighting back tears. He eventually said he was honored and humbled to receive the permanent job. “I look forward to continuing to work with the FPC for the betterment of our city,” said Norman.

The move effectively closes the book on an embarrassing chapter in Milwaukee policing history.

A prior iteration of the commission fought over the appointment of Alfonso Morales to the permanent role in Dec. 2019, then, acting unanimously, legally botched Morales’ demotion in Aug. 2020, triggering a lawsuit that resulted in a $627,000 payout to the former chief, the resignation of the FPC executive director and one commissioner, the replacement of others and a series of tie votes to elect a new chief.

“Initially during the first process you were my number one pick,” said Commissioner Everett Cocroft. “The one thing that put you ahead of the pack is that you care.”

Norman was the last remaining local finalist in the botched search, but was eliminated when the field was narrowed from six to three. He became acting chief in December after Morales’ replacement, Michael Brunson, retired. Brunson did not pursue the permanent post.

And despite the uncertainty surrounding city’s legal fight with Morales, Norman was able to successfully parlay the acting chief post into an on-the-job audition.

Multiple commissioners spoke in favor of Norman’s performance, and the reality that it was a “we” not an “I” approach to improving public safety in a city that is seeing a record number of homicides and vehicle thefts.

Get a daily rundown of the top stories on Urban Milwaukee
“One person cannot do the job by himself,” said Fred Crouther, one of the three carryover commissioners. Ann Wilson, the other remaining holdover, made similar comments.

Commission Chair Ed Fallone, a law professor, said Norman has made progress on community-oriented policing, complying with the 2018 Collins settlement, which was spurred on by racially disparate stopping practices, and the civilianization of department functions.

“He has spent his time as acting chief walking the walk,” said Fallone.

“We need stability and we need consistency,” said Joan Kessler, a retired judge. “I think he has done a good job, not a perfect job.”

“A city that has constitutional policing is still a ways off, but it is within our grasp,” said Kessler of the Collins settlement.

“His desire is not just to fill a position that is available,” said Crouther. And Milwaukee almost lost him, first because it didn’t pick him as permanent chief during the botched search and then because of the legal uncertainty Norman was applying for other jobs, including as chief of police in Wauwatosa.

Amanda Avalos, who came aboard as a potential tiebreaking vote as the initial search process was falling apart, praised the process to confirm Norman. “What it took to get here was truly a collaborative and transparent process,” she said.

“He answered them way behind what I thought,” said Wilson of her own questions.

Lanelle Ramey praised Norman’s collaborative leadership style and the fact that Norman was born, raised and worked in the city.

The acting chief was appointed assistant chief by Brunson in 2020 and prior to that served as captain of District 3, which includes the city’s West Side. He joined the department in 1996.

Norman holds a bachelor of science degree in criminal justice from UW-Milwaukee, a master of public administration degree from Kaplan University, and a juris doctor degree from Marquette University. He ran unsuccessfully for an open Milwaukee County Circuit Court judgeship in 2008, losing to now-Wisconsin Supreme Court justice Rebecca F. Dallet.

The majority of the commission had no role in the prior search. Four of the seven members are new, as is the executive director who serves as the board’s non-voting secretary. The reconfigured commission started a new search in September and only invited Norman to apply.

Moments after the FPC vote, Common Council President Cavalier Johnson, issued a statement backing Norman. “As we work to combat crime and address issues in the way we effectively police, including reforming and modernizing the department, I know Chief Norman will be a collaborative and open-minded partner. I look forward to his leadership, stability, and vision, and to working with him closely in the days ahead,” said Johnson. The council president has supported Norman getting the permanent post for months.

Norman also had the support of Mayor Tom Barrett and many members of the Common Council.

Fire Chief Aaron Lipski, who was promoted to the top job amidst the Morales fiasco, said he was excited to work with Norman on a permanent basis and that the two would make a “public safety duo.”

The Norman vote had none of the controversy that surrounded the 2019 vote that gave Morales a four-year contract. A retired police officer just added to the commission called the meeting within hours of being confirmed and a video leak of a sexual assault allegation painted the anti-Morales chair, DeVougas, in a bad light. Crouther abstained from that vote and Cocroft voted against Morales to delay the process while Wilson voted for him. Almost 40 people testified.

The agenda item to select Norman took less than a half-hour and engendered no opposition.