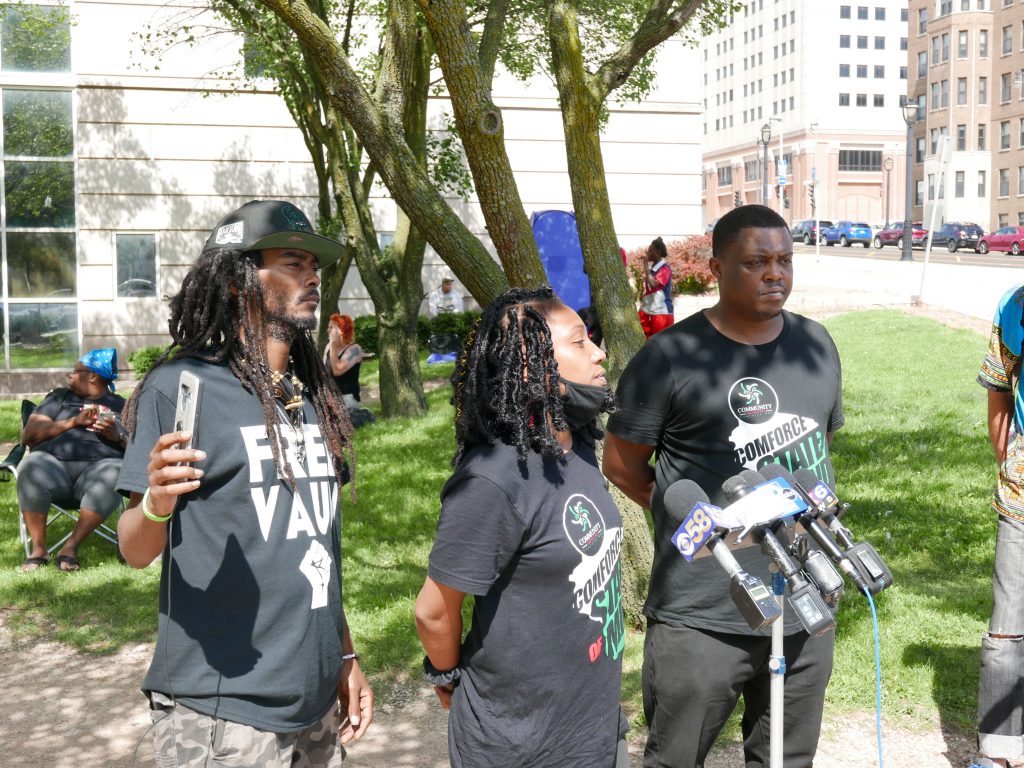 Gabi Taylor speaks to the crowd at the rally to free Vaun Mayes. Photo by Graham Kilmer.

The Milwaukee County District Attorney’s Office announced that Mayes would be released from jail Tuesday afternoon, while it continues to review the pending charges against him. Mayes was being held on three pending charges, jail records showed.

Mayes was stopped by Milwaukee Police Department officers Monday afternoon driving down W. North Avenue. He started a Facebook Live video, which captured the officers arresting him. Activist Frank Nitty was driving in a separate car ahead of Mayes and stopped when the police pulled Mayes over. Nitty also captured the arrest on Facebook Live.

In both the videos by Mayes and Nitty, the officers are heard saying that Mayes was being arrested on a warrant. The officers refused to say what the arrest warrant was for. Later that day, media were allowed to look at the arrest blotter, which showed Mayes arrest was for burglary party to a crime. 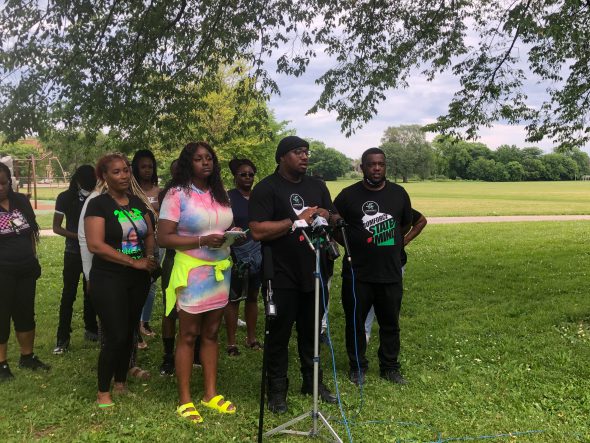 Activists that have marched with Nitty and Mayes in protests against police brutality, and members of Mayes’ Community Task Force, camped out outside of the Milwaukee County Jail Monday night. There were tents and mattresses and supplies set up Tuesday morning.

Gabi Taylor, who works with Mayes on two groups the latter has been active with, Community Task Force and Program the Parks, addressed the media Tuesday morning before Mayes’ release and said “We gonna be out here, we gonna be heard until justice is served and he is free.”

Taylor and Nitty both took direct aim at Police Chief Alfonso Morales, saying that he was directly responsible for Mayes’ arrest. Nitty called Morales a “rogue police chief” who is abusing his authority in the city because he “does not like criticism.”

Mayes has pending federal charges against him tied to the unrest in Sherman Park in 2016. Getting arrested would be a violation of his bond conditions, and could cause him to forfeit his bond and be remanded to jail by federal law enforcement.

“He hasn’t done anything wrong in four years,” Nitty said. “He actually does the opposite, which is help the community. And they’ve tried over and over and over to create a situation where he does something wrong.”

Taylor said federal law enforcement officials declined to revoke Mayes bond. And based upon the announcement that Mayes will be released this afternoon, it appears the bond tied to his federal case has not been revoked.

An MPD press release regarding Mayes arrest said it was connected to the incident at 40th and Loyd, where a crowd searched for missing teenagers, and ultimately burned down a house crowd members suspected was involved in sex trafficking.

Nitty and Taylor said that activists critical of MPD have been targeted and harassed by the department. Mayes arrest, they said, is proof.

Taylor said Mayes went to the 40th and Lloyd last week to de-escalate the situation. “He did the best he could do,” she said. Nitty, who went to de-escalate that day as well, said the police did little to de-escalate the crowd: “For some reason they expect us to be like ‘halt black people stop’, like we have that type of power.”

Nitty said he and Mayes stayed around that day because “even if things get out of control, we’re still leaders. We have to make sure that we’re there for that.” Nitty said if Mayes put his foot on a porch that day it was to tell people to come off the porch.

“And that’s why Morales has to go,” Nitty said. “Because he works for himself. And the police department works for him. And that’s a gigantic problem in our community.”

Taylor said local officials need to be held accountable for the actions of the police department. She said activists would be taking their complaints to the doorsteps of the mayor and District Attorney John Chisholm, as they did outside the county jail, until the harassment stops.

“Tom Barrett, Mayor Barrett, can you get your chief, he has to go,” she said. 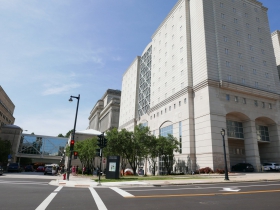 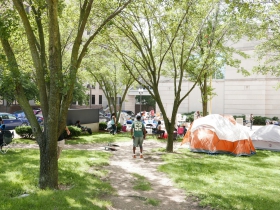 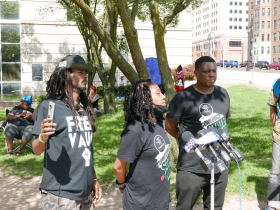 Mayes speaks after his release