What Happened At 6th and McKinley? 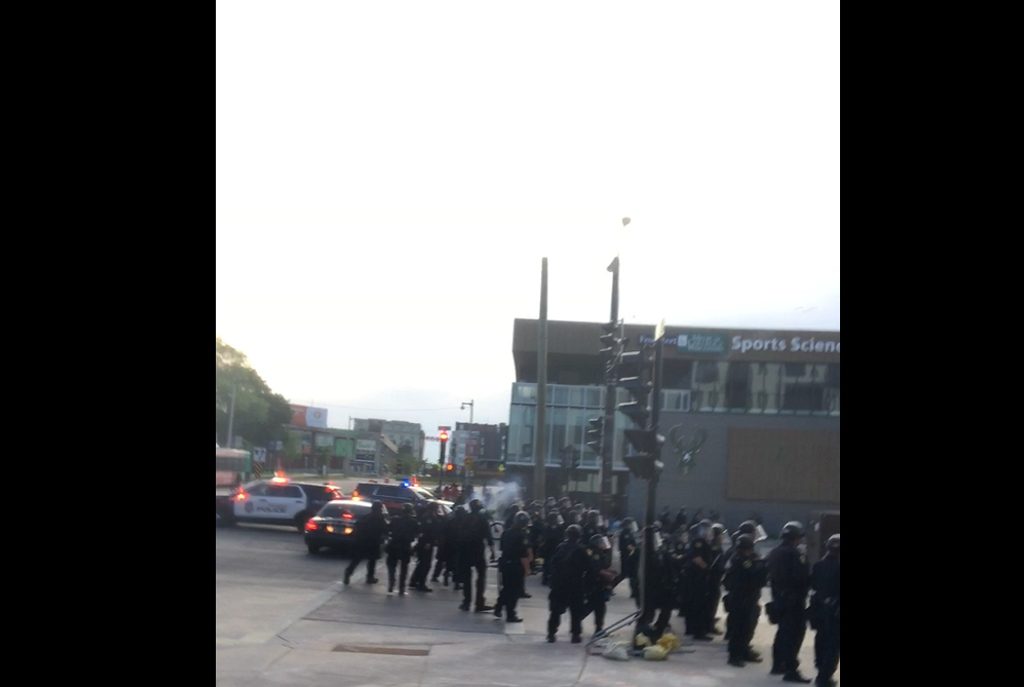 What happened yesterday between protesters and police at 6th Street and McKinley, when police made arrests and fired tear gas and rubber bullets at protesters?

Based upon reporting at the scene, corroboration from multiple sources that were there, and videos taken by and obtained by Urban Milwaukee, a contingent of bike police rode into a large group of peaceful protesters, and as they did this at least one of them fell off his bike. Then they started throwing protesters to the ground and arresting them. Then Milwaukee police started firing tear gas.

Individuals that were at the intersection spoke with Urban Milwaukee, but requested their identities not be publicized. “It all happened so fast,” one said.

In a video provided to Urban Milwaukee by protesters, at 7:24 p.m. bike cops had already rushed into the intersection at N. 6th Street and W. McKinley Avenue and were arresting a member of the march. In the video two bike police officers can be seen kneeling on a protester as they attempt to arrest him.

Police report that the situation was escalated by a Molotov cocktail in a plastic bottle being thrown at them at 8:08 p.m. But police had already deployed gas and made arrests at that point.

It was after the arrests that individuals threw plastic bottles.

The department shared photos of a plastic bottle and a charge, but no protesters report seeing a lit bottle being thrown. A Molotov cocktail normally contains a lit charge inside a glass bottle that shatters and spreads fire.

No media outlet, numerous of which filmed the incident, have identified footage of a lit bottle in the air.

A protestor took this video after watching the bike police crash into the column pic.twitter.com/3AhwHbleB4

One of the individuals Urban Milwaukee spoke to that was in the intersection said he remembers looking down McKinley watching the protesters coming into the intersection, only to look to his right seconds later and see bike police riding into the crowd from the south, one of them swinging his forearm and knocking a woman to the ground. In the video obtained by Urban Milwaukee, a protester is heard yelling, “They can’t rush in like horses.”

One of the individuals Urban Milwaukee spoke to that was in the intersection said he remembers looking down McKinley watching the protesters coming into the intersection, only to look to his right seconds later and see bike police riding into the crowd from the south, one of them swinging his forearm and knocking a woman to the ground. In the video obtained by Urban Milwaukee, a protester is heard yelling, “They can’t rush in like horses.”

The marchers Urban Milwaukee spoke with said the bike police started to collide with one another as they entered the intersection causing at least one to fall off his bike. It was at this point that they began arresting protesters.

An Instagram video taken at the scene shows protesters milling about the intersection moments before bike police rush in and start arresting them. It also shows the bike officer falling off his bike on his own, then getting up and colliding with another officer.

This is what they’re shooting at protestors pic.twitter.com/sVB1JkLK8Q

As the bike cops were arresting protesters in the intersection, video taken by Mark McPherson of CBS 58 shows protesters throwing water bottles and throwing back a tear gas canister, the wind blowing the gas into the bike police. Later in that video, law enforcement officers in green uniforms arrive at the intersection of W. McKinley Avenue and N. 6th Street and are seen shooting less-lethal rifles (with rubber bullets) at protesters across the street, many of whom were holding their hands in the air or clutching onto a protest sign.

The start of the unrest pic.twitter.com/BNc2Uf0fBS

From there police forced protesters north to the intersection of N. 6th and Vliet streets. Where once again they fired tear gas and less-lethal projectiles into the crowd of protesters.

Just moments ago in Milwaukee on @NewsMarkMcP’s live stream. After warning protesters, a cyclist gets too close and police start firing tear gas and rubber bullets. @CBS58 pic.twitter.com/q0LfFpzOr8

As Urban Milwaukee approached the scene at 7:53 p.m. plumes of tear gas were rising above the crowd, and some of the protesters were starting to flee east down Vliet. One woman Urban Milwaukee spoke with said that her bike chain had been blown off by a tear gas canister.

Note: Times listed on the tweets don’t indicated the time of filming.