Crowd surrounds house at 40th and Lloyd believed to be connected to missing children. 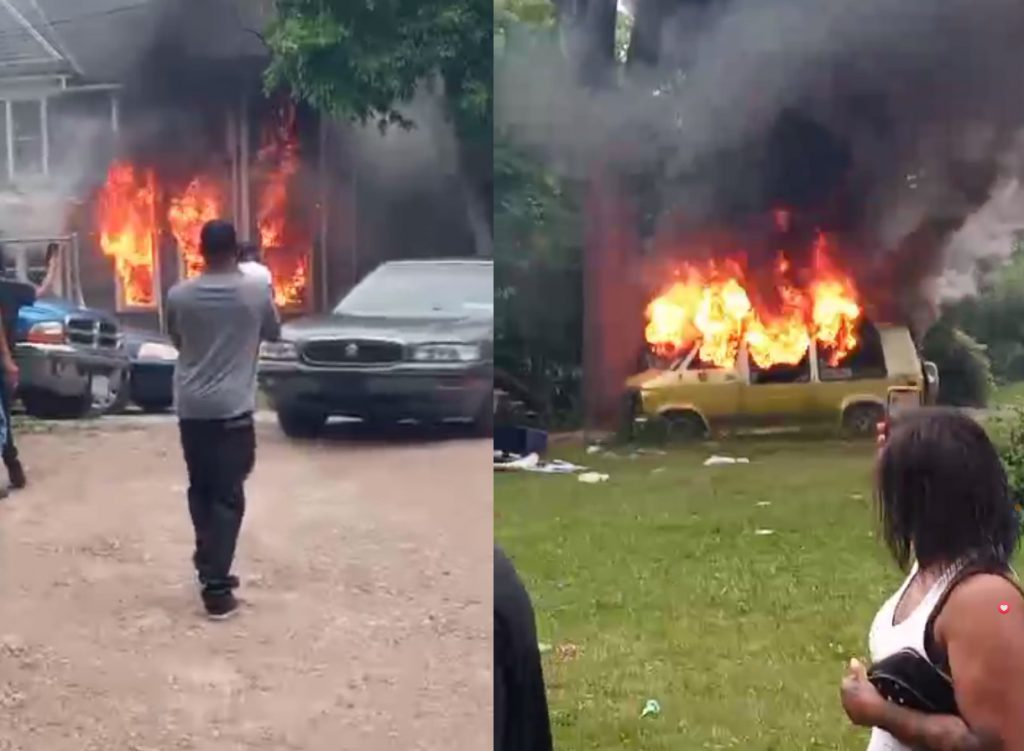 Two teenage girls missing since Sunday afternoon have been found according to their family (one according to the police department, see update) and a house that a crowd believed to be connected to their disappearance has been burned.

The confused situation erupted Tuesday afternoon after community organizers and others were alerted that two teenage girls and other missing children were spotted going between the house and a red van.

Several dozen people gathered outside the house and the Milwaukee Police Department was called. But community organizer Frank Nitty, who arrived on the site after a crowd had begun to gather, expressed frustration with the police response time and perceived lack of action.

“It took them so long to come to our community,” said Nitty, narrating his live stream video on Facebook.

He said that an individual believed to have knowledge of the incident ran from a home at 2120 N. 40th St. to another nearby home and later fled the scene. After police left people broke windows at the second home and officers in riot gear returned to the scene. “The guy in the van, he got away,” said Nitty, describing after the fact what he was told had happened.

A crowd formed, many attempting to defuse the situation including State Representative Jonathan Brostoff, and Nitty walked around the scene attempting to explain what had happened to a Facebook audience that eventually swelled to over 40,000 viewers.

“The community thought there was missing kids at this house,” said Nitty of the home just north of Washington Park. He said one child was placed into a car, but then ran away.

Not long after this, at the back of the house, a fire was spotted in the alley. Shortly thereafter police moved to address that situation and a crowd gathered around the gold van parked behind the house and at least one individual set it on fire. Then the house was started on fire.

“This is stupid because all of the evidence is in the house,” said Nitty. He and others said a pair of “bloody” shorts were found in the van earlier.

The fire in the van and home soon grew into a roaring blaze and police returned to the scene in force to create a perimeter. Gas canisters were used to clear the street, and during the commotion, while Nitty was trying to get someone medical attention, an individual was spotted firing a gun at a moving vehicle.

The Milwaukee Fire Department arrived on the scene and firefighters worked to fight the blaze from multiple angles.

After Nitty stepped between the crowd and officers around 6:20 p.m., officers started using batons and pepper spray on the crowd.

The incident, captured on the live stream video, happened shortly after Nitty stepped between the two groups to say “I’m trying to deescalate things.” Smoke and what Nitty identified as “tear gas” was thrown and the crowd threw the canisters back at the officers.

Community organizer Vaun Mayes, Office of Violence Prevention director Reggie Moore and others could be spotted in the crowd trying to deescalate the situation. Officer Minisha Howard, the first police officer to kneel with protesters outside MPD headquarters on June 2nd, was one of the responding officers on the scene.

Nitty engaged in a conversation with Sergeant Todd Smolen at one point shortly before 7:00 p.m. “I’m telling you, you’re being used,” said Smolen to Nitty.

Nitty walked away from the conversation and said he felt the organizers were helping.

Nitty then began to lead a march away from the house.

“If you move the tank, I can get all the people to go,” said Nitty to an officer about an armored MPD vehicle on the scene. He said the vehicle was obstructing both people and cars at the scene from leaving.

The driver moved the armored vehicle out of the intersection. “Once you take the cars away it gets a little bit more boring for people to stand out here,” said Nitty.

“When the group gets small, they’re going to try to pepper spray people,” he said, leading others away from the area.

“What just went down was some bullshit,” said Nitty after leading the group away.

The group eventually headed north on N. Sherman Blvd. “I would rather have my people marching positively than arguing with the police over shit the police can’t do,” said Nitty. “We’re still costing the city money at the same time.”

Nitty said he and others were angry because of the slow police response in a Black neighborhood versus an expected fast one in a white neighborhood. “That’s why everyone is mad,” he said.

“We had a victory,” said Nitty, riding in a vehicle as the group marched away. “Burning down the house wasn’t a victory, but finding two kids was a victory.”

The complicated situation left some questions unanswered, but was really unconnected to the protest movement that has arisen in the wake of the killing of George Floyd.

“This was a pretty chaotic scene.”

One of the teenagers, a 13 year old, was found at another location, but another remains at large. “We have not received the cooperation we expect from the family,” he said.

The chief said MPD is aware of the house. “We have responded to that house and that location multiple times in the last few days,” he said. City records list it as having three units.

But he expressed frustration with how the crowd altered the investigation. “Three victims were shot during this event, none by police,” he said. He promised video would show “bricks, not rocks” being thrown at officers. He said seven officers were injured.

“We cannot allow an unruly crowd to determine what that investigation is,” he said. “What you had today was vigilantism.”

Neither the people shot, nor the injured officers have life-threatening injuries said Morales.

What happened to people that lived at the house? “There were some people that were removed from the residence,” said Morales. “That investigation as we find out more we will provide it to you.”

MPD promised an update on Wednesday.

This is a developing story and will be updated as more information becomes available. Last updated 10:50 p.m.