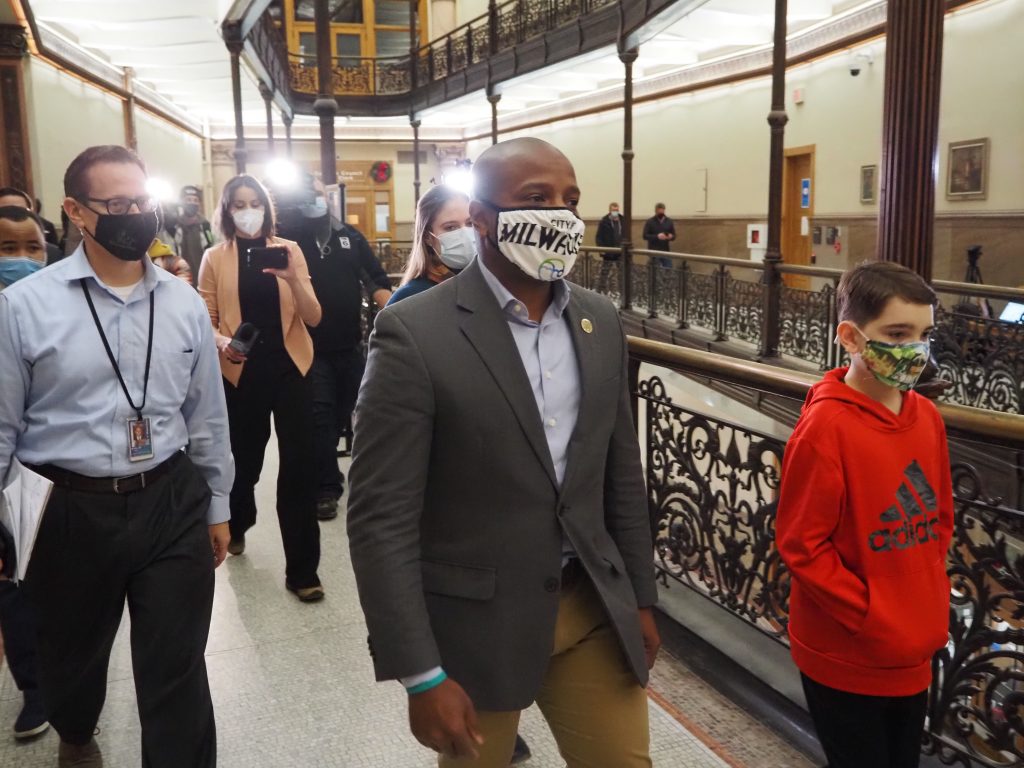 Ten years ago, acting Milwaukee Mayor Cavalier Johnson was a political nobody. A recent graduate of the University of Wisconsin, in 2011 Johnson ran for a seat on the Milwaukee County Board of Supervisors in a five-way special election. He finished fifth with 171 votes.

He ran again in 2012 for a different seat on the county board. He finished sixth that time, but out of seven candidates. It seemed like an improvement until you consider he got 106 votes.

In a move that now seems far from fortuitous, Johnson spent the next few years as a staff assistant to Mayor Tom Barrett. He didn’t give up the dream of holding an office, any office, maybe even that office.

In 2016 he ran for an open seat on the Milwaukee Common Council, a better paying and more powerful job than the county board. He won a five-way primary with 38% of the vote and pulled down 4,307 votes (52%) in the general election.

By the narrowest of margins, Cavalier Johnson had arrived. But true to his mild-mannered, friendly style, he wasn’t going to get in your face to tell you.

During the April 2016 charter meeting of the council, Ald. Russell W. Stamper, II, who won that county 2012 race, gave Johnson a good-natured ribbing for choosing to now go by Cavalier instead of Chevy and joked about how they formerly shared a driveway when campaigning. Johnson, surrounded by friends and family, took it in stride.

Johnson spent the next four years as one of the more publicly understated members of the council. He authored or co-sponsored 207 pieces of legislation during the term, placing him in the bottom third of the council. Not given to long floor speeches, bombastic press releases or public arguments, he was regularly present, but often among the last to speak. His most controversial piece of legislation, in terms of public opposition, was a ban on conversion therapy. It passed on a 12-2-1 vote.

But the understated Johnson built support behind the scenes.

Get a daily rundown of the top stories on Urban Milwaukee
After being reelected in 2020, Johnson was elected Common Council President on a controversial 8-7 vote. None of his Black colleagues voted for him. “My dream is that regardless of our differences, we recognize we have work to do and we must do it together,” he said at the time. Ald. Ashanti Hamilton, the past president, chided him. Johnson extended an olive branch by making Hamilton and other opponents powerful committee chairs.

The closed-door bargaining to become president may prove to be the shrewdest political move of Johnson’s rapidly developing political career.

On Aug. 25, President Joe Biden nominated Barrett, 68, to be the U.S. Ambassador to Luxembourg. Johnson, by virtue of his position, became the acting mayor in waiting. He immediately filed to run for mayor in a special election that will be held to determine who gets the job through 2024, knowing that he would get to campaign as the acting mayor. He’s now one of eight in the race.

But Barrett’s nomination ran into an unusual roadblock: U.S. Senator Ted Cruz (R-TX) and a fight about a Russian pipeline. Johnson, 35, began positioning himself as the city’s leader in public appearances, while Barrett took on an increasing lame-duck status.

While insiders expected the gridlock to continue into 2022, Sen. Ron Johnson (R-WI, no relation to Cavalier) came to the city’s aid. For reasons he’s never publicly explained, Johnson said his Republican colleagues would allow Barrett’s nomination through. Barrett describes his side of the story as receiving a text message from the Majority Leader Chuck Schumer (D-NY)’s chief of staff and within five minutes he was confirmed. “I was somewhat surprised when I got the message,” said the long-time mayor last week.

On Wednesday morning, Barrett announced that it was his last day. The longest actively serving big-city mayor in the country was to be citizen Tom come 5 p.m. He waved farewell to onlookers and media just before his resignation went into effect and left City Hall as mayor for the last time. He had served since 2004.

Just after 5 p.m., Johnson walked out of his council office. Joined by his oldest son Oliver, new chief of staff Jim Bohl and council chief of staff Kailyn Kenney the city’s new mayor walked the length of the second floor to his new office at the south end of City Hall.

Stopping to address the media at the door, Johnson used the message he’s used repeatedly since last Thursday: “I’m ready.” He gave the cliff notes version of his life story: One of 10 siblings, Johnson is the child of a Milwaukee Public Schools janitor and a certified nursing assistant that split up. He was a child who had to share beds with his siblings and moved so often he lost count of places where he lived. He resided in homes all over the city, including the 53206 ZIP code known for having the highest incarceration rate of African-American males out of any ZIP code in the country. He now lives in the city’s Capitol Heights neighborhood near the Midtown shopping center with his wife, Dominique, and three children. He’s already released his top priority: addressing reckless driving.

On Thursday he’ll tell a longer version of that story. He’s scheduled to be ceremonially sworn in at Bay View High School, from which he graduated in 2005.

Then he’s going to have to convince voters he’s the person for the job. As someone that once secured only 106 votes, he’s likely to need to eventually win more than 50,000 to become mayor.

2 thoughts on “The Incredible Rise of Cavalier Johnson”