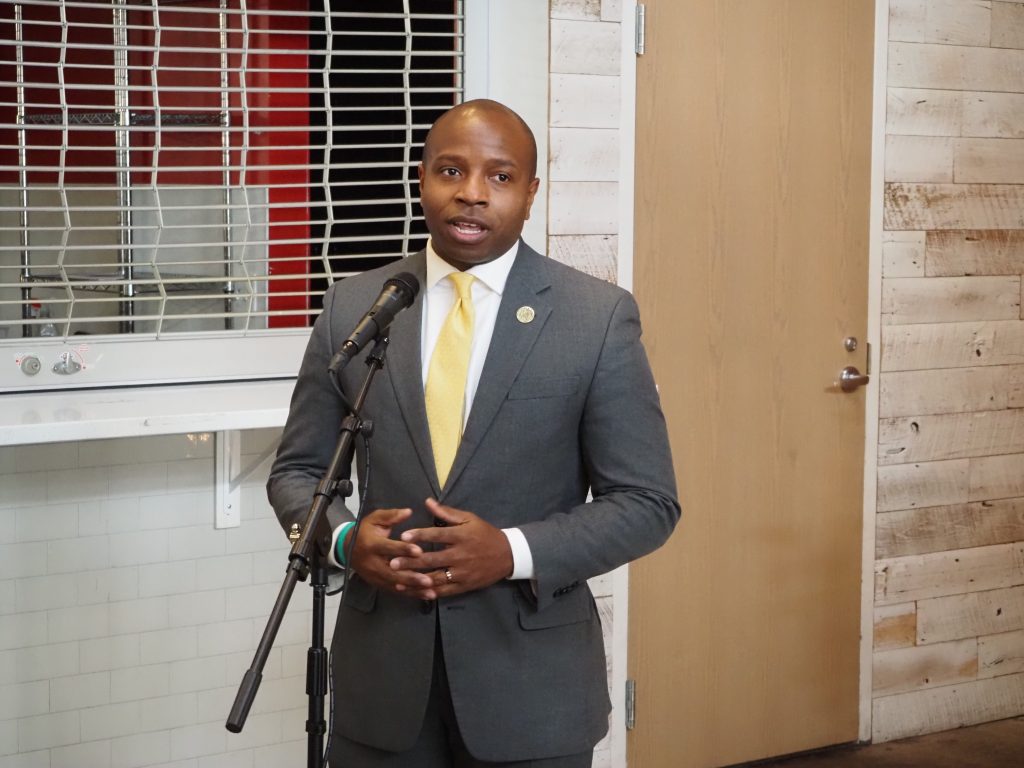 That was the tweet sent by Common Council President and acting-mayor-to-be Cavalier Johnson after Mayor Tom Barrett was confirmed as Ambassador to Luxembourg by the U.S. Senate on Thursday evening.

On Friday, Johnson doubled down in his first public appearance since the vote.

“I think I am uniquely qualified to do this job,” said Johnson in a press conference at the Sherman Phoenix that blurred the lines between a campaign stop and official briefing.

He will spend much of the next few months living that blurred line, running for mayor while serving as mayor. Any day Barrett will resign and Johnson will become acting mayor by virtue of his role as council president. He’s already filed to run for mayor, and was the first in a field of seven candidates.

Barrett, on Friday, confirmed he expected to resign by Dec. 28. That would allow the council to call a special election in time to coincide with the already-scheduled Feb. 15 primary and April 5 general election, saving the estimated $700,000 cost of staging an entirely separate process.

Get a daily rundown of the top stories on Urban Milwaukee
Johnson doesn’t just think he’s uniquely qualified for the permanent job because he will be the only candidate to have served as mayor. No, he has three reasons.

One, Johnson, 35, has lived experience of immense poverty, the kind many Milwaukeeans unfortunately experience. Standing next to Milwaukee County Executive David Crowley, Johnson discussed how they both grew up in the 53206 ZIP code, the city’s most impoverished and the state’s most incarcerated. The two have known each other since attending Bay View High School.

Two, he has experience in the mayor’s office. Before being elected to the Common Council in 2016 he worked for Barrett. Now he’ll acquire more experience.

Three, he has experience with the Common Council. Barrett’s agenda in recent years has run into gridlock when it comes to getting council approval. Johnson said his experience, including threading the needle to be elected council president by a single vote, will allow him to advance his agenda.

“My priority as mayor is going to be pretty clear. I am going to focus on public safety,” said Johnson, ticking off a list of maladies including reckless driving, non-fatal shootings and homicides. He said he would also work to boost the city’s COVID-19 vaccination rate. Those are issues he’s already moved on, negotiating the council’s acceptance of a federal COPS grant, championing infrastructure solutions to curb reckless driving and getting vaccinated on camera.

He praised Barrett for putting the city in a good position for a smooth transition. “My relationship with the mayor has been great,” said Johnson. “His office has worked seamlessly with my team.” Barrett has invited Johnson’s staff to high-level meetings in recent months.

But how much does Johnson like Barrett’s staff? “I don’t know that we are going to have a major turnover in staff when I come into office,” he said. A number of staffers were fired when Marvin Pratt became acting mayor after John Norquist resigned. Multiple sources within city government have told Urban Milwaukee they don’t expect drastic changes during the acting mayor period.