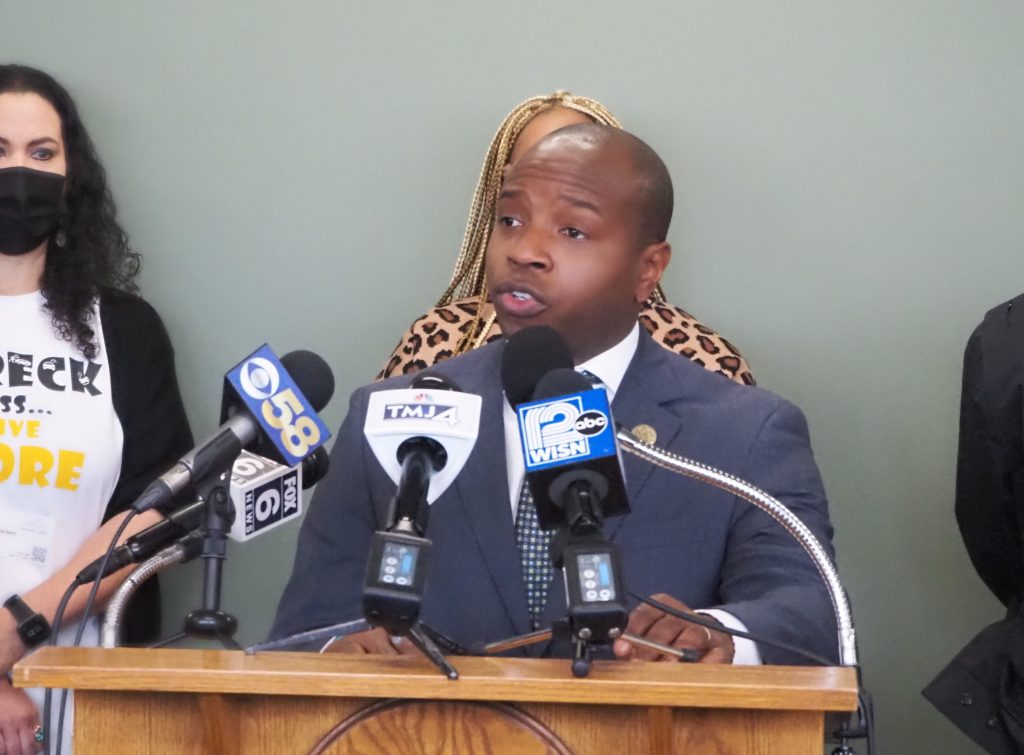 Discussion of reckless driving in Milwaukee is sure to bring up a first-hand experience from virtually any resident, whether it’s the record number of vehicle thefts, red light running, high speeds or the “Milwaukee slide,” an act of passing in the parking or bicycle lane.

“It’s a quality of life issue, and an issue that has ruined lives,” said Common Council President and acting-mayor-to-be Cavalier Johnson. “No matter where you go in Milwaukee this is an issue.”

But Johnson, expected to be sworn in as mayor by Dec. 28, said he has a multi-faceted plan to address the various issues.

“What good is a city if we can’t guarantee safe passage for our students to get to school, if we can’t guarantee safe passage to go to the grocery store to get your prescription?” asked Johnson, describing a situation where residents told him they were unwilling to walk across W. Capitol Dr. to go to the grocery store at Midtown Center. “Yes, the city has undertaken some points of meaningful action on this problem, but clearly it has not been enough to move the needle.”

Get a daily rundown of the top stories on Urban Milwaukee
Johnson said that on day one his administration would declare reckless driving a public crisis. “This will be my top priority,” said the alderman, one of eight candidates running for mayor, but the only one doing so as acting mayor. He will use his new power to create within the mayor’s office a position of reckless driving coordinator, responsible for organizing interdepartmental efforts and intergovernmental cooperation. That individual would also be responsible for implementing the previously issued recommendations of the city-county reckless driving task force.

“This plan fully recognizes the crisis we are facing,” said Johnson of his effort, noting it has a “Vision Zero” goal. “We will establish a 10-year goal for eliminating traffic fatalities on our roadways.”

He said his plan will utilize each of the “three Es” to improve traffic safety – enforcement, engineering and education.

“I’m grateful to Chief Norman for his work,” said Johnson. He said he would seek to allocate additional resources to Norman’s newly formed traffic safety unit (TSU). Johnson backed the use of civilian service officers to expedite investigating car theft cases and the use of an already allocated $1.15 million to support additional TSU staff time and 50 more automated license plate readers. Johnson is publicly backing a state law change that would allow the city to use red-light cameras and is supportive of a change to expand the authority of the Milwaukee Police Department to tow unregistered vehicles that are being driven at excessive speeds. Johnson was joined by MPD assistant chief Paul Formolo at the event.

Johnson’s engineering focus includes attempting to accelerate already planned Department of Public Works projects and calling for more long-term resources, including federal funds from the recently passed infrastructure bill. He is also calling for state legislation that mandates all Wisconsin Department of Transportation projects in Milwaukee adhere to the city’s Complete Streets policy that is designed to protect all users, not just drivers. He was joined at the press conference by WisDOT south east region deputy director Roberto Gutierrez, who said WisDOT was ready to be a partner.

Johnson is also championing a policy change whereby all expiring TIF districts would have their final year’s funding increment allocated to traffic safety improvements. Mayor Tom Barrett‘s administration, as allowed within a half mile of district borders under state law, has often used the final year increment for paving projects in recent years, often for quickly executed high impact paving projects. But the city does not have a formal policy on the matter. Watching from the audience at the press conference were a number of DPW leaders, including acting commissioner Karen Dettmer and city engineer Jerrel Kruschke.

The education component of Johnson’s proposal is wide ranging. It includes the standard hope of bolstering drivers education within Milwaukee Public Schools, but also increasing the municipal court’s offering of driver’s safety classes instead of fines, working with the Office of Violence Prevention (OVP) and other community organizations on youth outreach efforts and a new restorative justice intiative for young vehicle thieves. OVP director Arnitta Holliman spoke in favor of the proposal.

A recent MPD report revealed that of those arrested for stealing vehicles, primarily Kias and Hyundais with an easy-to-override ignition, more than 50% are minors. At the end of November, Milwaukee had more reported vehicle thefts than Chicago, a city nearly four times its size.

“It’s not simply just the vehicles,” said Johnson. “There are problems at the root level that we have to address with our families.”

But there is one entity that doesn’t appear anywhere in Johnson’s plan: Milwaukee County. The five-page plan includes no mention of the District Attorney, Circuit Court, Sheriff or any other county official. MPD officials, in presenting the vehicle theft report earlier this month, raised concerns that vehicle thieves were not facing any consequences after being arrested.

Johnson, when asked by Urban Milwaukee, stressed that his plan is a living effort and subject to change. “I fully believe the county will be our partner in moving to make sure our streets are safe,” he said.

“My plan is a bold start for what needs to be done in our city.”

You can read the full plan on Urban Milwaukee.