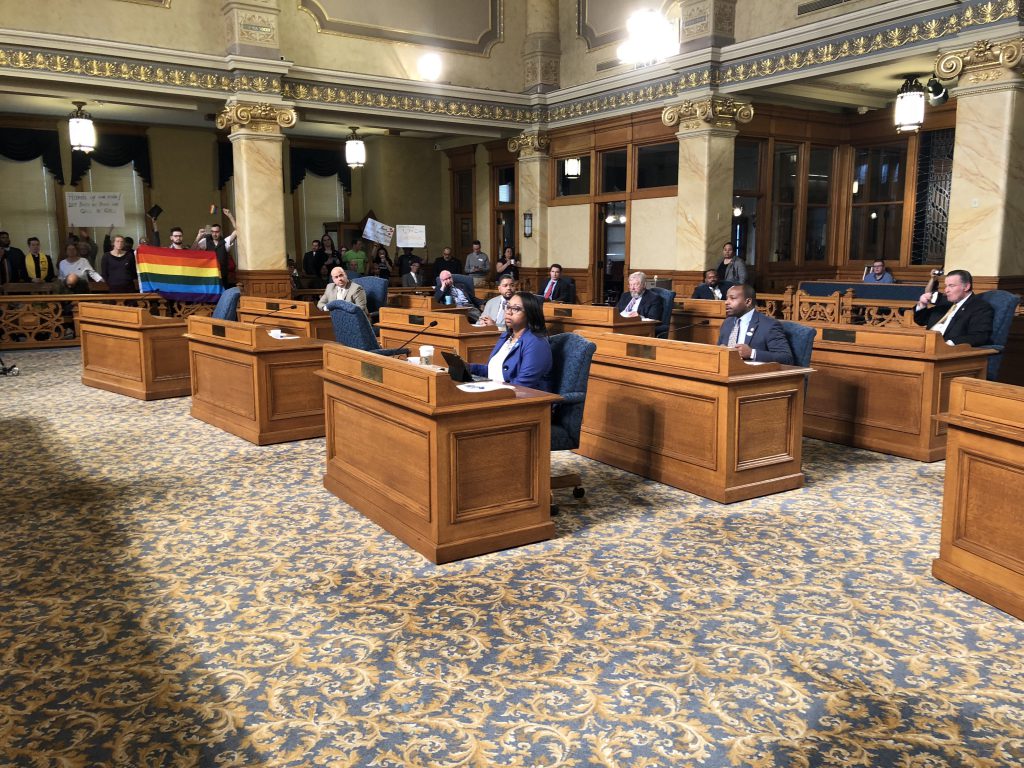 The Milwaukee Common Council voted to ban the controversial practice of conversion therapy Tuesday morning. The legislation, introduced by Alderman Cavalier Johnson, prevents the fee-based practice of the therapy on minors within city limits.

Conversion therapy, also known as reparative therapy, is the practice of trying to change a person’s sexual orientation or gender identity. The practice is most commonly used on teenagers that come out as gay or lesbian.

Proponents and opponents of the ban packed the council chambers at City Hall on Tuesday morning, with opponents frequently interrupting members of the council making floor speeches on the measure. A number of those present spent a substantial amount of time after the council voted shouting, with many suggesting that ordinance proponents and council members would go to hell. “Sin is sin,” repeated one individual over and over.

In his most significant speech during his two years on the council, Johnson laid out the case against the therapy. “Young people experience conversion therapy as a form of family rejection,” said Johnson.

The practice leads to increased rates of depression, substance abuse and suicide, according to a study from the American Psychological Association referenced by Johnson. “The practice is scientifically unfounded and has been refuted by virtually every major medical and psychological organization in the United States,” said Johnson.

Johnson said his ordinance is carefully crafted. “It does not impact the faith-based community at all,” said the northwest side alderman. The ordinance only applies to fee-based conversion therapy, and only to minors. “I wanted to make sure they understand this is not an attack on their ability,” said the alderman.

Ald. Mark Borkowski moved to send the measure back to committee. “Let me just say that this is a topic that is uncomfortable for me. I’m not very intelligent when it comes to this.” Borkowski, who abstained from voting on the measure at the Public Safety and Health Committee, said the hearing on the measure was stacked in favor of the ban.

Johnson responded that “it’s not something that was posted the night before, or even hours before the committee hearing.” He said notice was above and beyond the legal requirement, and that the measure received substantial coverage in the media. “I vehmently disagree that we need to send this back to committee. We know it’s harmful to people,” said Johnson.

The council supported Johnson’s stance, rejecting the motion to send it back to committee.

The council ultimately passed the ban on a 12-2-1 vote, with council members Robert Donovan and Borkowski in opposition and Russell W. Stamper, II abstaining.

Ald. Chantia Lewis, in a lengthy speech, said: “It has been very disheartening to see and to hear and to be in the middle of a fight where our main objective here is to protect children.” She went on to ask: “If the result of whatever we are doing as Christians results in suicide, have we done our jobs?” Like Johnson, Lewis is a northwest side freshman council member, and was won over by the proposal’s protections for the faith community and the overwhelming data that shows the practice is harmful to minors.

Ald. Donovan spoke in opposition to the measure, stating: “The testimony we received previously simply did not make the case in my mind that this problem even exists here in Milwaukee.” Donovan said the ordinance is an overreach by local government.

“Its actual impact is exaggerated by both sides,” said Ald. Jim Bohl. “The real impact is obviously going to be made on a statewide basis,” he added. Bohl said his family has sought counseling on other matters and engaged with professionals with locations in and outside of the city. He called the measure “symbolism, but important symbolism.”

Stamper said he abstained because while he understood the positions of both sides, “I wasn’t comfortable either way.” He said his district is filled with people on both sides of the issue.

The Columbia Law School reviewed 13 studies of the practice that included primary research. Their analysis found that only one of the 13 studies concluded the therapy could be effective. According to the law school, “[the favorable study’s] entire sample self-identified as religious and it is based on self-reports, which can be biased and unreliable.”

“The facts are clear that this therapy does a lot more harm than good,” said Ald. Nik Kovac.

The ordinance would allow the city to fine offenders between $500 to $1,000 if they are caught practicing conversion therapy on minors in Milwaukee. The practice is already banned in nine states and at least 35 other cities.

The measure now heads to Mayor Tom Barrett, whose spokesperson Jodie Tabak says the mayor will sign it.