The Rise of Cavalier Johnson

Up from poverty and getting crushed in his first two runs for office, he's the upstart winner for council president. 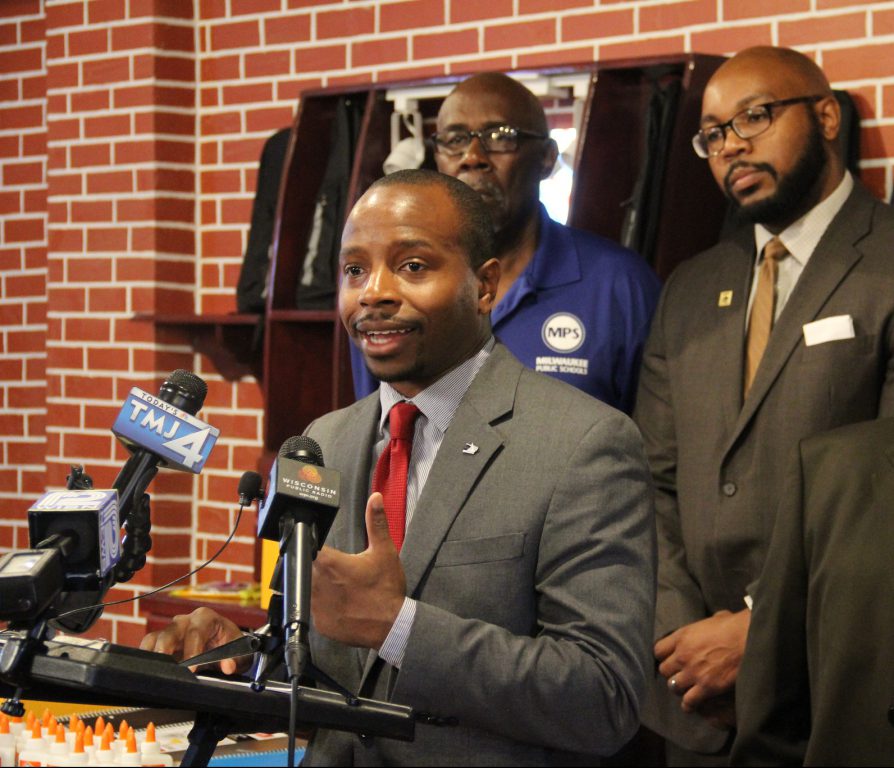 Cavalier Johnson speaks at a press conference in August 2016. Photo from the City of Milwaukee – Public Information Division.

In 2011, 24-year-old Cavalier “Chevy” Johnson ran for a seat on the Milwaukee County Board of Supervisors in a five-way special election. He finished fifth with 171 votes.

He ran again in 2012 for a different seat on the county board. He finished sixth that time, but out of seven candidates. It seemed like an improvement until you consider he got 106 votes. The winner of the race, Russell W. Stamper, II, lived next door to Johnson at the time.

Johnson spent the next few years as a staff assistant to Mayor Tom Barrett, having previously worked for the Milwaukee Area Workforce Investment Board.

But Johnson didn’t give up the dream of holding elected office. He set his sights on a better paying and more powerful post. In 2016 he ran for an open seat on the Milwaukee Common Council. He won a five-way primary with 38 percent of the vote and pulled down 4,307 votes (52 percent) in the general election.

Cavalier Johnson had arrived. But true to his mild-mannered, friendly style, he wasn’t going to get in your face and tell you.

During the April 2016 charter meeting of the council where he took the oath of office surrounded by family and friends, Stamper, who made the jump to the council in 2014, gave Johnson a good-natured ribbing for choosing to go by Cavalier instead of Chevy and joked about how they formerly shared a driveway when campaigning.

Johnson spent the next four years as one of the more publicly understated members of the council. He authored or co-sponsored 207 pieces of legislation during the term, placing him in the bottom third of the council. Not given to long floor speeches, bombastic press releases or public arguments, he was regularly present, but often the last to speak. His most controversial piece of legislation, in terms of public opposition, was a ban on conversion therapy. It passed on a 12-2-1 vote.

But getting to that point wasn’t easy he said. “I am one of 10 siblings,” he told his colleagues. The son of a Milwaukee Public Schools janitor and a certified nursing assistant that split up. And a child who had to share beds with his siblings and moved so often he lost count of places where he lived. He resided in homes all over the city, including the 53206 ZIP code known for having the highest incarceration rate of African-American males out of any ZIP code in the country.

He now lives in the city’s Capitol Heights neighborhood near the Midtown shopping center with his wife, Dominique, and three children.

He told his colleagues that he was moved to public service as part of a program at Bay View High School. He would go on to earn a bachelor’s degree in political science from UW-Madison.

“There were times that I did not think I would make it, but I held my head high and got to work, ” said Johnson.

But his campaign to become Council President wasn’t met with universal admiration. He won on an 8-7 vote and none of his African-American colleagues voted for him.

“My dream is that regardless of our differences, we recognize we have work to do and we must do it together,” he said.

The first vote Johnson oversaw, the election of a City Clerk, ended up being more controversial than expected.

Alderman Ashanti Hamilton, who lost his bid to be re-elected council president, said Johnson should recognize that things didn’t go smoothly. “This is the first time that I’ve been on the council that we’ve had divided votes on either of these positions. It should go noticed and it should go with some recognition that there is a reason for that,” said Hamilton. “I am hoping that as we move forward we are not just calling on reunifying, we are calling with rectifying what causes this division.”

“As my first word of advice, it starts at the head. I am hoping that there is a recognition of this historical moment and what’s necessary to right the ship going forward,” said Hamilton.

One thought on “City Hall: The Rise of Cavalier Johnson”