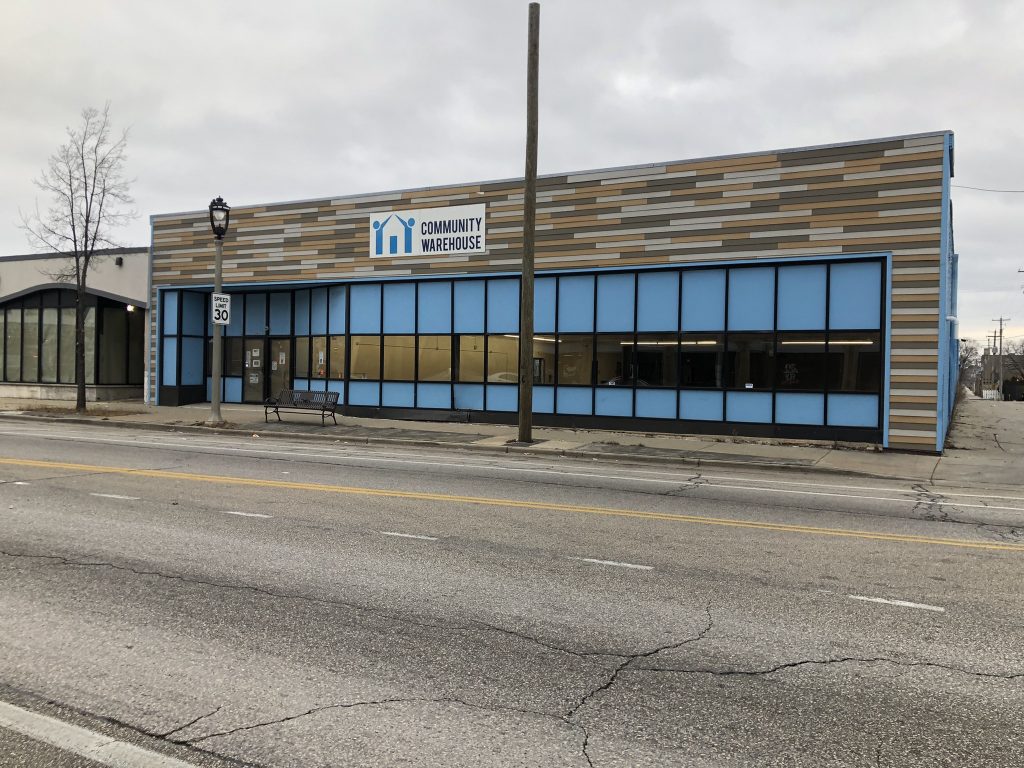 The museum was founded in 1988 by James Cameron, a civil rights activist and only known survivor of a lynching. But after Cameron’s 2006 death the museum closed in 2008 amid financial difficulties. It will reopen on Feb. 25, on what would have been Cameron’s 108th birthday.

The public-facing museum will operate from the first floor of The Griot building at 401 W. North Ave.

The newly-acquired, one-story building across the street will be used for academic programming, museum offices and storage. The 36,900-square-foot building was last used by Community Warehouse, a nonprofit seller of building materials, and before that housed a Value Village thrift store.

The museum also announced a $10 million anonymous gift via the Greater Milwaukee Foundation.

“At a time of hyperpolarization, we are in dire need of safe spaces and opportunities created to bring us together to explore difficult issues, to learn, and to celebrate our history,” said ABHM president and CEO Robert M. Davis, president and CEO in a statement. “The reemergence of the museum is critical at this time for Bronzeville, Milwaukee and nationally, and I am honored and humbled to continue the work and the legacy of our founder, Dr. James Cameron, as a result of this generous commitment.”

As of 2018, the museum had a $7 million fundraising goal which would not only cover building out a new, 6,000-square-foot museum but provide a $4 million endowment.

The museum acquired the building, built in 1950, and underlying lot for $950,000 in November. It announced the donation and its plans for the property this month.

Get a daily rundown of the top stories on Urban Milwaukee
According to city building permits, Riverwest Food Pantry was considering purchasing the building this summer. The organization filed for a zoning code appeal.

The building includes a basement with a high ceiling that was previously used as part of the public-facing retail sales floor.

The Griot apartment building, named for the term for a West African oral historian, was completed in 2018, but fundraising was not far enough along to reopen the museum. Then the COVID-19 pandemic introduced a new delay. The planned February reopening was first announced in September.

The reopening is just one of many projects taking place in the corridor. Maures Development Group is starting an affordable housing project to the north that will include 30 units of housing. It’s also building a permanent home for the Bronzeville Center for the Arts at 507 W. North Ave. To the east, the State of Wisconsin is selling the former Wisconsin Department of Natural Resources regional headquarters at 2312 N. Martin Luther King Jr. Dr. The city is selling a number of development parcels in the area. 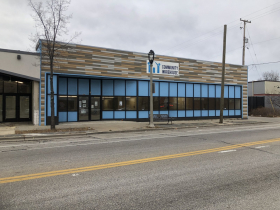 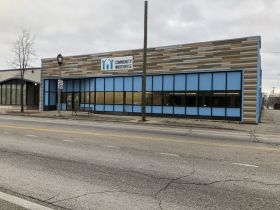 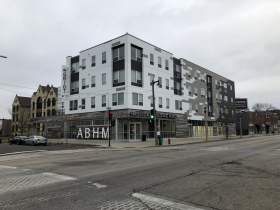 Though not a single beam arrived by ship, the Port of Milwaukee played a key role in delivering all of the lumber needed for the construction of the world’s tallest mass timber building.

The 25-story Ascent apartment tower rose steadily over the past year, first with seven floors of concrete and then 18 floors of mass timber. When finished next year, the building will rise 283 feet, eclipsing the current world leader, the Mjos Tower in Norway, by three feet.

But to get to that height, New Land had to create a global supply chain. Austria-based companies KLH Massivholz and Wiehag created the mass timber beams and columns in their European plants before shipping them to the East Coast. Then the shipping containers would clear customs in Chicago.

That’s when the Port of Milwaukee entered the chain.

An e-commerce fulfillment company has set up shop on Milwaukee’s Near West Side.

Atomix relocated to the two-story building at 2203 W. Michigan St. from West Allis.

“This move signifies a pivotal moment for Atomix and gives us the opportunity to take root in the heart of Milwaukee,” said CEO Austin Kreinz in a statement. “Our family’s long history in the logistics industry combined with our growing and experienced team has allowed us to scale from our original 400 square feet of warehouse space. We’re looking forward to building the company and expanding our team in the Near West Side.”

Atomix hopes to hire up to 30 people in 2022 with roles in engineering, sales and operations. It hopes to open additional facilities on the east and west coasts in the next two years.

Her firm, Maures Development Group, is about to start construction on a scattered-site affordable housing project that will create or rehabilitate 30 units of rental housing. Prior to that she developed The Griot apartment building (with space for America’s Black Holocaust Museum) and redeveloped the adjacent Garfield School into affordable apartments.

Her next project will see her developing an arts facility for the Bronzeville Center for the Arts (BCA). The recently formed nonprofit is focused on exploring, preserving and presenting African American art and culture.

The neighborhood fixture was purchased for $500,000 cash by the Riverwest Investment Cooperative, a member-owned investment organization created as a tool for neighborhood residents to get involved in the development of their own community.

Clare Lewis, a board member, told Urban Milwaukee the organization was keen to keep Falcon Bowl, 801-803 E. Clarke St., in community hands. “The building has been an anchor in the community for generations,” she said in an interview.

While Komatsu Mining has made headlines in recent weeks for an oil spill at its current campus in the West Milwaukee, the company is putting the finishing touches on its new facility, South Harbor Campus, in Milwaukee’s Harbor District.

The development, billed as the largest urban manufacturing facility under development in the United States, includes a 176,000-square-foot office building overlooking the inner harbor and a 430,000-square-foot factory. It will produce mining shovels, to be shipped in pieces, that weigh over three million pounds and can lift 120 tons at a time.

Those wishing to see the final product can now head to the site, located at the east end of E. Greenfield Ave. A large yellow shovel, the kind to be made at the plant, is set up in front of the office building. It looms over a truck that the company makes at a different facility.

The county board is moving to use a $1 million cash payment from a major real estate deal to improve the parks.

The money comes from a land sale between UW-Milwaukee and Irgens at the Milwaukee County Grounds.

The Historic Preservation Commission is poised to welcome a new member under a proposal making its way through the Common Council.

Architect Nicholas Hans Robinson would be the seventh member of the part-time commission.

The commission has broad design oversight over the exterior of locally historically-designated buildings and districts. It also plays a key role in determining what buildings are historic, and which aren’t.

“I’m a native of Milwaukee, practicing 100% in Milwaukee, and, in fact, most of our projects are in 53206,” said Robinson to members of the Zoning, Neighborhoods & Development Committee on Dec. 7. His company is doing a number of developments located in the 53206 ZIP code, the city’s poorest.

The Milwaukee Common Council had a big vision when it adopted a citywide deconstruction policy in 2018. It would create jobs, protect the environment and save money by mandating old homes be effectively dissembled, instead of mechanically demolished.

The plan called for the city to prime the marketplace by deconstructing its own homes, instead of demolishing them. A deconstruction requirement was placed on privately-owned homes built before 1930.

But, so far, it hasn’t worked.

Christ Church Milwaukee is moving full speed ahead on a plan to move into a former industrial building in Milwaukee’s Haymarket neighborhood.

Led by pastor Jon Talley, the church intends to use the two-story, 22,500-square-foot building for a worship space. It would also lease out the space to neighboring organizations, including schools.

A coalition of pastors interrupted a Milwaukee Common Council meeting Tuesday morning by marching onto and around the council floor.

Led by Milwaukee pastor Steven Tipton and Indiana-based Rainbow PUSH Coalition member bishop Tavis Grant, a couple dozen protestors circled the council floor singing “We Shall Not Be Moved,” carrying “MKE Churches Matter” signs and calling for an end to what they say is a “tax & take” practice by city officials. State Senator Lena Taylor joined them in the protest action.

It’s just the latest move from a group of north-side pastors who say the city is unfairly levying property taxes against their churches. City officials, including Assessment Commissioner Steve Miner, have said they are attempting to enforce state laws and agree that churches complying with the laws should not be taxed.

The Historic Third Ward Architectural Review Board met to consider the design merits of the complex.

“We don’t deal with anything that has to do with zoning or usage matters,” said board staffer and UW-Milwaukee architecture professor Matt Jarosz.

But that doesn’t mean they didn’t talk about it.