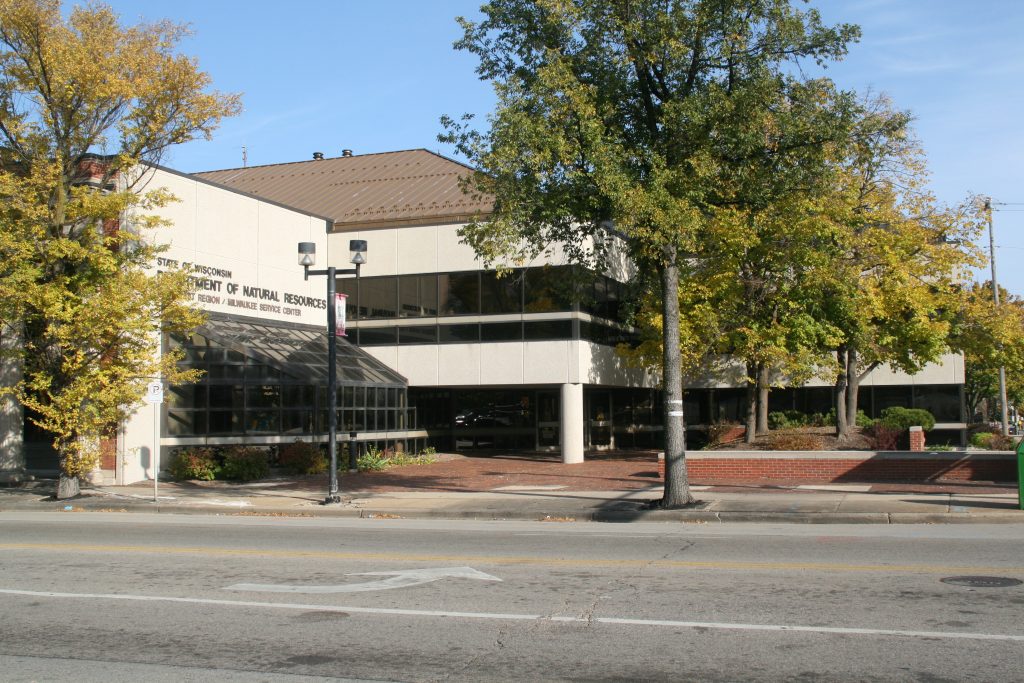 A two-story office complex is available at a busy Milwaukee intersection.

The 3.4-acre property is located at the northeast corner of the intersection of W. North Ave. and N. Dr. Martin Luther King Jr. Drive. The L-shaped site stretches north to W. Meinecke Ave. and east to N. 2nd St.

The two-story, 33,995-square office building was constructed in 1983, though a portion of it is many decades older. The Neoclassical stone facade and a portion of the interior of what was last a First Wisconsin bank branch, is integrated into the complex. It was originally built in 1911 to the designs of Kirchhoff & Rose.

A former DNR laboratory occupies much of the 12,675-square-foot basement.

A 167-stall parking lot fills much of the eastern portion of the site.

A third-party consultant, The Nicholson Group, appraised the property at $1.2 million.

Get a daily rundown of the top stories on Urban Milwaukee
The DNR vacated the building earlier this year as part of a relocation to the Menomonee Valley. The state agency took over the former Milwaukee office of the Wisconsin Department of Transportation, 1001 W. St. Paul Ave., and constructed a new boat storage facility across the street at 1028 W. St. Paul Ave. The state acquired both of those properties, long occupied by the Aldrich Chemical Company (today’s MilliporeSigma), as part of the Marquette Interchange project.

The Department of Administration declared the longtime DNR property surplus and listed it for sale, as is.

It sits at the intersection of two corridors that are seeing increased investment. To the west, a Pete’s Fruit Market grocery store and The Griot Apartments were developed in recent years. Additional properties are listed for sale.

Just two blocks south, a number of projects are underway with the $84.5 million ThriveOn King development leading the way. Further north towards W. Locust St., a new Martin Luther King Jr. Library branch is being developed as part of a larger mixed-use development.

Proposals are due Dec. 2.