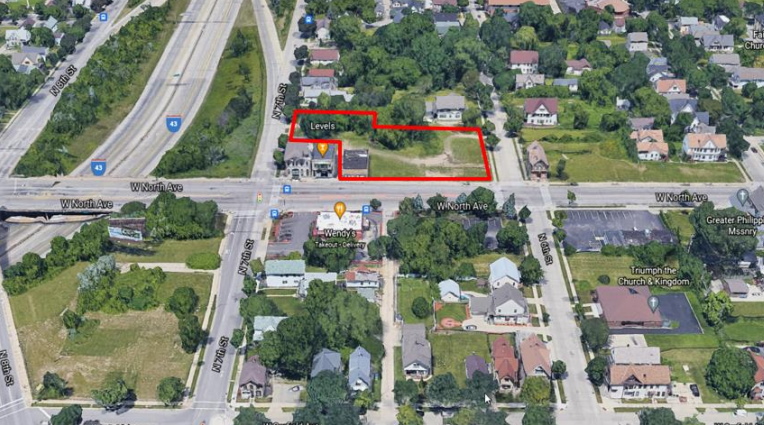 6th and North Development Site. Image from the City of Milwaukee.

The Department of City Development is looking for a catalytic project to be built on a 1.1-acre site along W. North Ave.

“This is the ideal time to invest in Bronzeville,” says a request for proposals issued by DCD. The asking price is $300,000 for a collection of eight, contiguous parcels on the north side of W. North Ave. between N. 6th St. and N. 7th St. The west side of the site overlooks Interstate 43, with access ramps at W. North Ave.

The RFP, issued Tuesday, indicates that the city is looking for a multi-story, urban building to be constructed on the site. At least 75% of the 230-foot-long North Avenue frontage should be faced with a building within five feet of the lot line and at least 30 feet in height. At least 60% of the first-floor facade should be storefront-sized windows. “Any housing proposed should strive to provide a mix of units affordable to a range of incomes,” says the RFP.

The city’s request isn’t without precedent. There is a building that matches the description located two blocks east. The Griot apartments, 2235 N. Vel R. Phillips Ave., opened in 2018 to great fanfare. The four-story building includes 41 apartments, a number of which are set aside at below-market rates through the low-income housing tax credit program. The 6,000-square-foot commercial space is occupied by America’s Black Holocaust Museum. The historic 4th Street School, located immediately to the south, was redeveloped in 2017 and includes an additional 30 apartments. The combined project was led by J. Jeffers & Co. and Maures Development Group. Maures, led by Melissa Allen, is now pursuing a scattered-site housing project in the surrounding Harambee neighborhood.

DCD hopes the momentum from that project and other nearby developments will extend to the newly-offered site. The RFP touts The Griot project as well as the nearby Pete’s Fruit Market and $100 million ThriveOn King development. It also references projects quite a bit further south, including Fiserv Forum and the new Milwaukee Public Museum complex. But the RFP says the city would like to bridge the gap between the development clusters. “The City is actively exploring opportunities, and seeking funding, to extend the streetcar system north along Dr. Martin Luther King Drive to North Avenue,” says the document.

Seven of the eight properties offered in the new listing are vacant. A one-story, 2,100-square-foot building at 628-630 W. North Ave. is the lone structure on the eight sites, with the RFP including photos of the interior in significant disrepair and suggesting it as a candidate for demolition. No showing of the building is offered, a potential harbinger of its future demise. “If your proposal contemplates adaptive reuse of the building, assume that all mechanicals, electrical work, flooring, roofing and interior walls need to be replaced,” says the RFP.

A 2013 design charette for the area, led by UW-Milwaukee’s Community Design Solutions, included the site as one of six for which future use options were contemplated. Miller Architectural Group produced conceptual drawings of an apartment building facing W. North Ave. with parking in the rear. A large greenhouse, billed as a winter garden, was included on the eastern edge of the site and promoted as a place for future events and private rentals.

Get a daily rundown of the top stories on Urban Milwaukee
RFP responses are due by October 7th at noon. The future use must be taxable.

Not included in the offering are the two privately-owned parcels at the northeast corner of N. 7th St. and W. North Ave., 634-636 W. North Ave. and 642 W. North Ave. Both are occupied by actively used buildings. 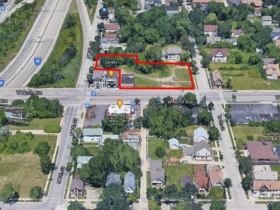 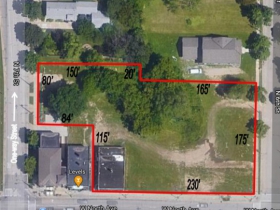 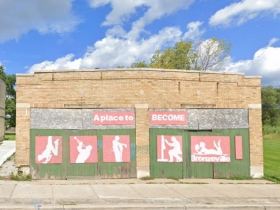 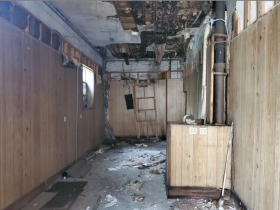 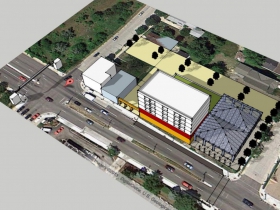 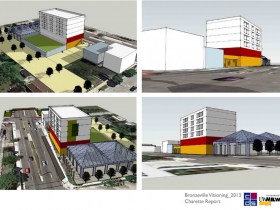 One of Milwaukee’s most popular citywide events will again be in-person for its 11th annual installment.

Doors Open Milwaukee will take place September 25th and 26th. The 2020 event was an entirely virtual affair due to the COVID-19 pandemic.

The event is free to attend and features guided or self-guided tours of a wide variety of buildings, letting visitors see inside areas that are often off-limits. Attendees of the family-friendly event are effectively given a key to more than 100 buildings.

The Milwaukee School of Engineering is nearly finished with the renovation of its oldest student housing building.

Roy W. Johnson Hall will become Hermann Viets Tower when work is finished on the $37 million project. The revamped residence hall, what the university is calling a “living-learning community,” is scheduled to open in time for the 2021-2022 school year.

General contractor VJS Construction Services has fully enclosed a new, glassy tower on the south side of the 13-story building. The original building, 1121 N. Milwaukee St., opened in 1965.

A dilapidated building on N. Holton Street is getting rehabilitated thanks to a new real estate company.

Paul McKenna recently purchased the building at 2379 N. Holton St., which he is using as the new offices for his real estate brokerage, McKenna Real Estate.

Thursday morning, Port Milwaukee revealed the previously undisclosed tenant that will replace the Sea Scouts on a waterfront parcel at the eastern end of E. Russell Ave.

Marek Landscaping will lease the 0.87-acre parcel at 2452 S. Lincoln Memorial Dr. The company is a design-build contractor focused on sustainable waterfront design and habitat restoration. It will construct a multipurpose office and warehouse building on the site and install a bridge crane to service receive vessels and bulk materials.

The lease agreement, running for a maximum of 50 years, is expected to generate at least $1.3 million in revenue for the City-owned port. Port director Adam Tindall-Schlicht previously said the then-undisclosed company would create at least 10 jobs on the site.

Ollie’s Bar Is For Sale

You can own a slice of Milwaukee history. Ollie’s is for sale, according to a neon poster board hung on the front of the southside tavern.

“The tavern never got the microbeer memo, so all you will find is the commercial stuff,” Horne wrote. “But, with a mini pitcher of Miller and a shot of brandy running you less than $5, this place is known as one of the cheapest taverns in town.”

Wisconsin’s housing sales are outpacing last year’s numbers even as the state has seen a sharp decline in the number of available homes.

The latest figures from the Wisconsin Realtors Association show 38,531 sales of existing homes in the first six months of the year. That’s an 8.4 percent increase over the 2020 sales numbers to that point, though sales plunged for part of last spring due to the coronavirus pandemic.

Still, sales last month were even with June 2020, even though the total number of listings fell 19.3 percent from 2020 to 2021. The decline in homes on the market has constrained home sales for the last few years.

Tax Exemption For Church Gets Pushback

A church wants to take over an art gallery in the city’s Haymarket neighborhood north of Fiserv Forum. And with it, the building would become tax exempt.

It’s the latter fact that is drawing concern from members of the Common Council.

“The city is comfortable with that arrangement for an area that has seen significant development?” asked Alderman Robert Bauman at Tuesday’s meeting of the Zoning, Neighborhoods & Development Committee. “I have a problem with this file as a result of that.”

The 1500s on Jefferson Street Okayed

Josh Delaney‘s proposal to develop an office building and four townhomes on the 1500 block of N. Jefferson St. was unanimously approved by the Zoning, Neighborhoods & Development Committee Tuesday morning. But not before one project opponent sang an original song as public testimony to encourage green energy investments.

Known as The 1500s, the proposal includes a three-story office building (The 1540) and four townhomes along N. Jefferson St. between E. Pleasant St. and E. Lyon St. Delaney would live in one of the townhomes with his family and rent out the remaining homes for between $7,000 and $9,000 each per month.

Delaney’s umbrella firm SnackTime Capital would occupy the office building as well as his cannabidiol company, FABCBD. Both are currently based in St. Francis.

The last public hearing for a proposed new apartment building drew little opposition, but that doesn’t mean no one is opposing the building.

Developer Brandon Rule is seeking to build a five-story, 79-unit building at 1887 N. Water St. on Milwaukee’s Lower East Side. It would include a mix of one, two and three-bedroom units and 53 parking spaces.

“There has been overwhelming public opposition to be clear,” said area Alderman Nik Kovac on Tuesday morning to his colleagues that serve on the Zoning, Neighborhoods & Development Committee.

A new cafe is open in Milwaukee’s “Crisol Corridor” with hopes of creating a new neighborhood anchor.

On Monday morning, Urbal Tea opened its first cafe at 3060 S. 13th St. The location is just north of Oklahoma and on the redeveloping strip from S. 13th Street from Cleveland to Morgan Avenues which was dubbed Crisol Corridor in 2015, boosted by a Business Improvement District (BID) that was formed.

The cafe’s opening marks the continued growth of the Milwaukee business. Owner Nick Nowaczyk started the company as a side business selling at farmers markets nearly a decade ago, made the jump to being a full-time entrepreneur serving wholesale customers in 2016 and now has his first cafe and dedicated manufacturing facility.

Schlitz beer may have made Milwaukee famous, but the Cream City’s most famous and widely available product is the Harley-Davidson motorcycle. The firm has retailers in 98 countries spanning the globe. So strong is the brand loyalty that the H-D logo is frequently requested by customers at tattoo parlors. The firm’s headquarters remains at 3700 W. Juneau Ave., where the first factory was built in the back yard of the home of William C. Davidson (1846-1923). His sons Walter Davidson, Sr. (1876-1942), William A. Davidson (1870-1937) and Arthur Davidson (1881-1950) founded the firm in 1903 with their neighbor, engineer William S. Harley (1880-1943). Since 1915 the company has set aside one of each model made, storing the machines along with an incredible amount of corporate memorabilia in its warehouses and other facilities.  The collection of motorcycles includes the earliest known H-D vehicle, Serial Number One.