But this value will soon increase. And the site has a remarkable history. 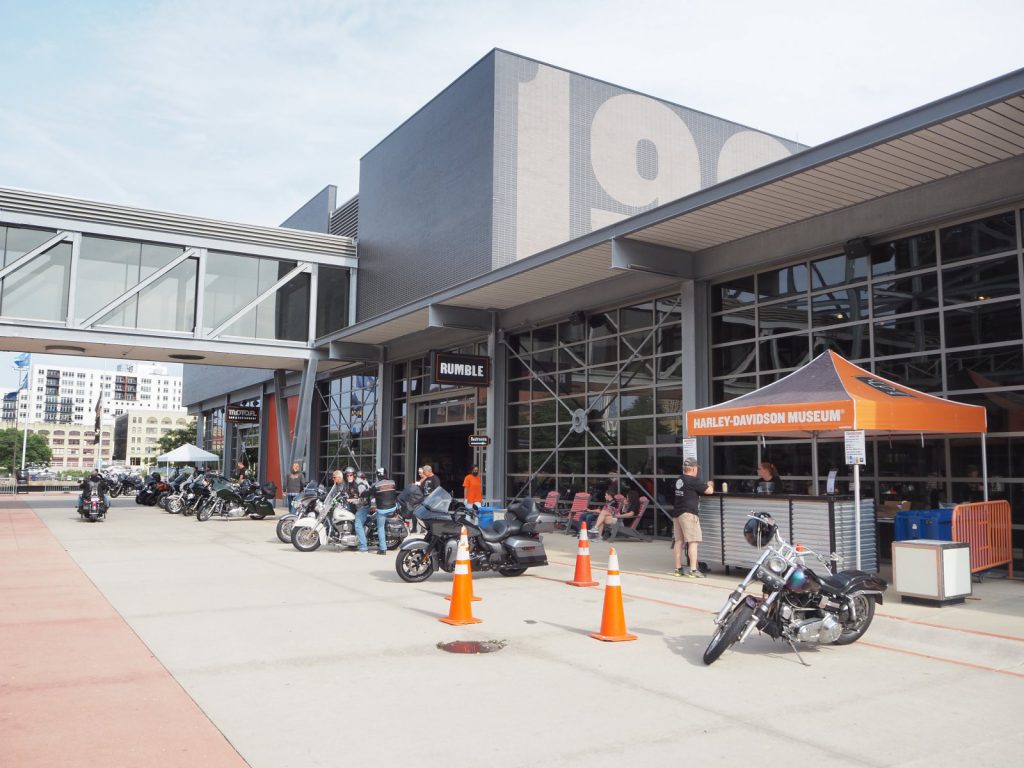 Schlitz beer may have made Milwaukee famous, but the Cream City’s most famous and widely available product is the Harley-Davidson motorcycle. The firm has retailers in 98 countries spanning the globe. So strong is the brand loyalty that the H-D logo is frequently requested by customers at tattoo parlors. The firm’s headquarters remains at 3700 W. Juneau Ave., where the first factory was built in the back yard of the home of William C. Davidson (1846-1923). His sons Walter Davidson, Sr. (1876-1942), William A. Davidson (1870-1937) and Arthur Davidson (1881-1950) founded the firm in 1903 with their neighbor, engineer William S. Harley (1880-1943). Since 1915 the company has set aside one of each model made, storing the machines along with an incredible amount of corporate memorabilia in its warehouses and other facilities.  The collection of motorcycles includes the earliest known H-D vehicle, Serial Number One.

Such a burgeoning assemblage begged to be placed in a home of its own, so during the 1990s the firm hired Dr. Martin Jack Rosenblum (1946-2014), a UWM professor and poet who styled himself as The Holy Ranger, a character appealing to the motorcycle crowd, becoming a cult figure in his own right. According to his obituary:

Marty was a diehard Harley enthusiast and while working for Harley-Davidson, he was responsible for organizing the archives, motorcycles, and materials that went back to the beginning of the Motor Company. His efforts played a major role in the creation of the current Harley-Davidson Museum.

But where to locate the museum? The company wanted a high-visibility location, so the headquarters was out of the running. There were plans to place it at Schlitz Park, the site of the former brewery, but they fell through. But in the early 2000s, a home was found on 15 acres of land at the eastern end of the Menomonee River Valley, surrounded by canals on three sides, and contaminated by over a century of heavy industrial uses.

A parcel was assembled on land used by the Milwaukee Department of Public Works, Morton Salt Company and Lakeshore Sand Company at 125 N. 6th St. The huge property was bisected by W. Canal St., and located between the two spans of the cable-stay bascule bridges of the new 6th St. Viaduct, a dramatic structure that opened to traffic in 2002. It replaced a 1908 viaduct that spanned the entire valley, with a small spur leading below. When engineers from the state proposed a similar design, Mayor John Norquist pushed instead for the current one, which allowed for development of the region to accelerate with ground level access to W. Canal St.

On June 1st, 2006, a groundbreaking ceremony was held, with a distinctly H-D touch. Eschewing the traditional golden shovels, the soil was broken by dirt biker Scott Parker, riding a Hog. Attendees received a small vial of the earth, with a tag attached, commemorating the event. The museum opened to the public on July 12th, 2008, and now ranks as one of the city’s top tourist attractions and event venues. At the time, the city assessor calculated the property’s value at $1,899,100 for the land and $9,000,900 for the improvements, for a total valuation of $10,900,000. Today the land is valued at the same amount, while the improvements are assessed at $10,120,600 for a total of $12,019,700.

It will soon be time for the assessor to pay another visit to the property, as a second groundbreaking was held on Thursday, July 15th, as Jeramey Jannene noted in his story for Urban Milwaukee. Once again, a motorcycle replaced the golden shovels. The new 8,200-square-foot “Garage,” is to be an event facility and replace a seasonal tent on the grounds, and will certainly increase the value of the property.

The Site in History

“Milwaukee” is sometimes translated from the Native American “Milioke” as “Gathering Place by the Water.” The Menomonee River flowed lazily to its confluence with the Milwaukee and Kinnickinnic rivers, rimmed by native plants and wild game, with abundant marshes of wild rice (“Menomin”) to provide grain. The Potawatomi tribe occupied the land by the 1700s. Other tribes to gather here at various times included the Ojibwa, Fox, Menominee, Ottawa, Sauk  and Winnebago. They were displaced by white settlers in 1835. By 1850 the Milwaukee and Mississippi Railroad ran from the valley five miles west to Wauwatosa, ultimately reaching the Big Muddy at Prairie du Chien in 1857.

Byron Kilbourn, the founder of the railroad, intended it to bring the bounty of Wisconsin’s farms and forests to Milwaukee’s port. As early as 1861, Milwaukee’s port led the world in the shipment of wheat, exporting as much in a day as Edward D. Holton did in a year, when he sent the first load by ship in 1842. As traffic grew, port improvements were called for, and by 1869 the valley floor was raised 21 feet, while the bluffs to the north were lowered as much as 60 feet. The river was channelized, and the site for the Harley Museum was for a period of time an island, with the since-filled-in Holton’s Canal to its west, along with the extant North and South Menomonee canals. Bagnall’s Slip, also since filled in, ran east-west on the middle of the site, now the middle of the museum.

For over a century, the four-mile long and half-mile wide valley became the polluted heart of “The Machine Shop of the World,” with hundreds of factories employing thousands of residents in a panoply of 19th century industrial jobs.

Here, at the northeast corner of the valley, where we now find the museum, were located a number of enterprises typical of the time. One of them has a family connection to its current use.

The Sanborn Atlas of 1894 shows a number of heavy industrial uses on the site. J. Gross & Sons and the Wisconsin Fuel Co. stored mountains of coal on the site, while the Milwaukee Lumber Company, Steinman Lumber Co. and Moe and Bentley did the same with the enormous volume of logs transported from the interior of the state. J. Rademacher did them one better, dealing in coal and wood. A. C. Beck planed the lumber at its mill, while Mueller & Sons converted scraps into boxes, with the entire third floor of its factory devoted to the manufacture of cigar boxes.

The map also mentions the “Shoddy Mill” of J. S. Davidson. This was not to disparage the property of Mr. Davidson, but to describe it for fire insurance purposes. A “Shoddy Mill” is used to convert waste fabric scraps into an inferior type of cloth, often used to stuff mattresses. Many of this city’s industrial recycling firms began with an early family member buying rags and transporting them to the mill. Upon such humble beginnings are great fortunes made.

The mill’s owner, John S. Davidson (1849-1907) was the younger brother of William C. Davidson, whose three sons and William Harley were to found the motorcycle company in 1903.

By 1910 we find a new viaduct rising 22 feet above the site, with a U-shaped approach leading to the docks of the Western Line and Cement Co., organized by Orren Robertson, the son-in-law of Edward D. Holton, whose canal was right around the corner from the cement warehouse. Bentley and Company’s lumber piles averaged 12-feet to 15-feet high. Davidson’s shoddy mill was gone, with the adjacent Gross coal piles expanding to that site, at more than twice the height of their woody counterparts.

As the decades rolled on, the entire valley fell into a general disuse, with only a few firms remaining by midcentury. These tended to be rather disagreeable affairs like stockyards, slaughterhouses, and the Milwaukee Tallow Company, whose malodorous emanations were familiar to nearby residents and County Stadium visitors on humid summer nights, and much remarked upon. The Stockyard Bar and Feedlot Restaurant lasted until the late 1980’s, located right in the middle of the mess and popular with those who used knives at work, and occasionally for mischief, as a scarred bartender who worked at the establishment made abundantly clear.

By 1999 the Menomonee Valley Partners was incorporated to help redevelop the area, including the Harley site, raised yet another five feet to contain the contaminated soil beneath. The sheds of the city were torn down, as the factories preceding it had been decades before. HGA designed the brick-clad structure, which was once again surrounded by native plants and trails. The Menomonee Valley Partners also is now spearheading the reclamation of the stagnant and polluted Burnham Canal to the south. The valley has also drawn a number of modern factories, sandwiched between American Family Field, the Potawatomi Casino and Hotel and the Harley-Davidson Museum — three of the area’s principal attractions, which have returned the valley to its historic role as the “Gathering Place by the Water.” 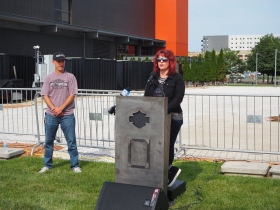 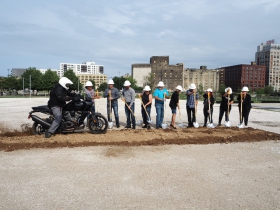 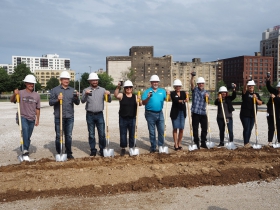 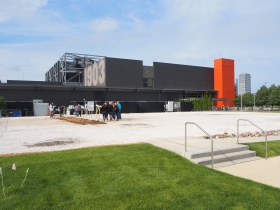 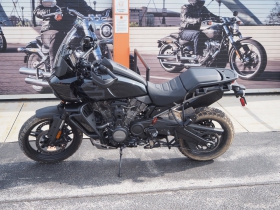 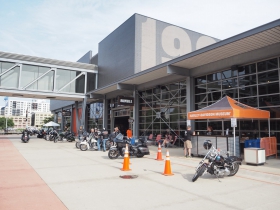 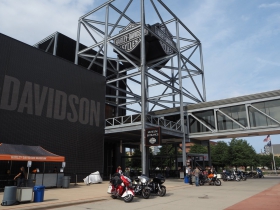 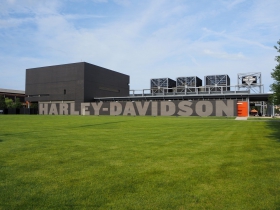 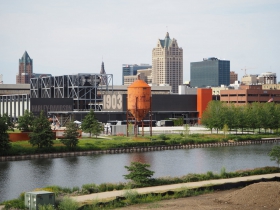