City of Milwaukee can't make the vision for program work. Who's to blame? 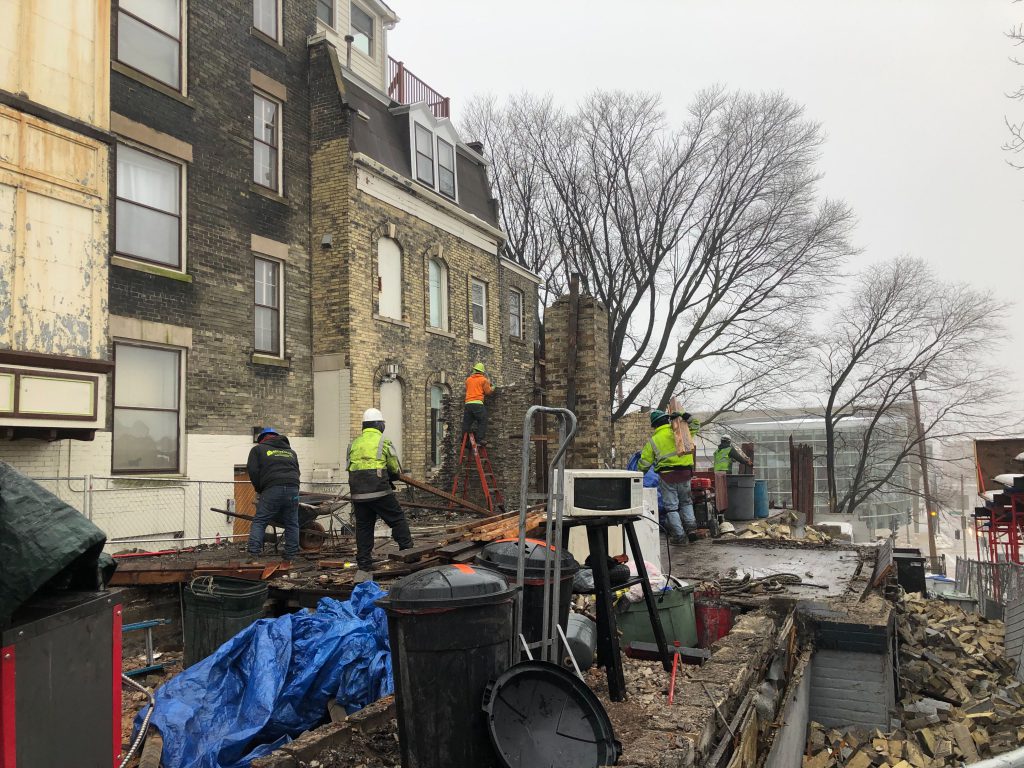 Deconstruction of the duplex at 1245-1247 N. Milwaukee St. by Recyclean. Photo by Jeramey Jannene.

The Milwaukee Common Council had a big vision when it adopted a citywide deconstruction policy in 2018. It would create jobs, protect the environment and save money by mandating old homes be effectively dissembled, instead of mechanically demolished.

The plan called for the city to prime the marketplace by deconstructing its own homes, instead of demolishing them. A deconstruction requirement was placed on privately-owned homes built before 1930.

But, so far, it hasn’t worked.

The council has had to suspend that requirement repeatedly, and will likely need to do so again before it would go back into effect in March 2022.

Meanwhile, officials have struggled to find a contractor that could perform even the city’s own work. The city fired a once-lauded firm, Spencer Renovation & Construction, after the owner became unresponsive. In fall 2020 the city hired a new partner, White Glove Group, that is making slow progress.

At least one alderman believes he knows the source of the problem: the Department of Neighborhood Services.

“Frankly, the reason this hasn’t worked is because your department has never embraced the program fully,” said Alderman Robert Bauman when the Zoning, Neighborhoods & Development Committee reviewed the effort on Nov. 16. “You pay lip service to it, you try to mollify aldermen who supported it… But it’s never been fully embraced and unless you go all-in on a program of this type, to do it at scale, you will never create the resale marketplace.”

Get a daily rundown of the top stories on Urban Milwaukee
The deconstruction concept is simple, at least in theory. Instead of mechanically smashing old buildings and sending the materials to a landfill, the structures should be dissembled by entry-level workers and the salvageable materials, notably old-growth lumber, sold to contractors and home-improvement stores. The revenue from the materials would offset the cost of the increased amount of labor, with jobs being created in the process.

But Bauman said DNS has never been committed to scaling the effort, resulting in a situation of one-off demonstration efforts that prevent a marketplace from forming and give an edge to the long-standing demolition process.

“Doing one deconstruction at a time is very expensive and then you can say ‘look, see how expensive it is,'” said Bauman. “Mechanical is so easy for bureaucrats… Bing, bam, boom, the property is gone in two days.”

DNS Commissioner Erica Roberts deferred to department supervisor Chris Kraco, who has been with the program for more than a decade, to present DNS’ findings.

In discussing the city’s successes and failures, one thing came up again and again: contracting requirements.

“Some of the contractors that practice this privately are very skilled, they are light years ahead of everybody else, but they are having difficulty getting into contracts with us,” said Kraco.

The requirement to comply with the Residents Preference Program (RPP), where 40% of work hours must be completed by unemployed or underemployed city residents, is tripping up a number of contractors given that they work with small crews and already have an employee roster.

“Northcott Neighborhood House was ready, willing and able to take on this project, but they were told they weren’t eligible,” said Bauman of the nonprofit that often works with individuals recently released from prison. “If they can’t participate in this then there is a problem with the rules.”

DNS operations director Thomas G. Mishefske said the department did talk to Northcott management about going through the SBE requirement, but the organization didn’t proceed.

Bauman asked if DNS did anything to make compliance easier.

“We did not introduce any legislation,” said Mishefske. He said changes to contracting requirements would impact more than deconstruction.

Kraco said the nonprofits that partnered with an eligible for-profit turned in bids that were at least $18,000 higher per home “because of their cost of having to partner with someone to meet the compliance.”

“Can that be changed?” said Coggs of stripping the requirement.

“I believe that would take council action,” said Roberts.

“Do you think the program is worth pursuing?” asked Alderman Russell W. Stamper, II, who with Coggs and Ald. Khalif Rainey represents a district with the greatest number of city-owned, foreclosed homes that are demolition candidates.

“I think we could revisit the ordinance and come up with something that is agreeable for everyone,” said Kraco. “I think it will take a little bit of doing though.”

“I would say definitely yes, however I would preface that by saying we should not mandate deconstruction,” said Mishefske. “We are just not to the point where we can require people deconstruct at a higher cost and there just isn’t an available contractor pool or distribution pool for the materials that would result.”

He said the city had other challenges beyond contracting requirements and capacity. Bonding and insurance requirements also trip up potential contractors. “It’s often difficult for small firms or new startup firms to obtain that level of coverage,” said Mishefske of the requirements. “I think we have to work through some of the issues that prevent capable companies from bidding.”

So what’s next? “Unfortunately, it’s just very difficult to pinpoint one specific issue to target because there are many,” said Roberts.

She said the city could solve some of the small problems, but might not be able to make the ecosystem work. She said small uses have been found for the materials, but the effort hasn’t been able to provide the consistent semi-loads of materials that bigger buyers want.

Roberts said she disagreed with Bauman’s characterization of the problems.

Michael Laidley of Recyclean said his firm has hadn’t issues selling the materials it generates in its private work. “Wood is our biggest product out there right now,” he said. Laidley attributed part of that to the surge in lumber prices.

But the firm, according to past DNS statements, has been unable to meet the city’s RPP and SBE requirements. It has performed a number of deconstructions for private owners. Laidley said the firm is working to comply with the requirements.

As of the November meeting, DNS was waiting for responses from the top two ranked bidders for the next package of city-owned deconstructions.

The current contractor, White Glove, has completed eight homes and is working on two more. In February DNS officials said the firm was weeks away from completing the remaining four homes on its 10-home contract.

If the council does not act, the deconstruction requirement will automatically go back into force on March 1.