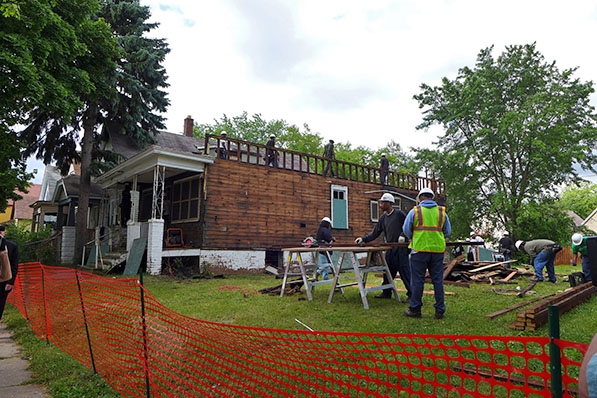 The City of Milwaukee is making yet another attempt at deconstructing, not demolishing, dilapidated homes it acquires through property tax foreclosure.

The Department of Neighborhood Services (DNS) hired White Glove Group to replace Spencer Renovation & Construction. The city moved to fire Spencer in March as the firm was months behind on work and unresponsive.

White Glove will now attempt to fulfill the Common Council’s 2018 vision of creating jobs and protecting the environment by salvaging materials from old homes instead of sending almost everything to a landfill. It is that latter factor that is supposed to offset the increased cost of using more manual labor to disassemble buildings versus mechanical demolition. Materials, including old-growth lumber, are to be routed to contractors and home improvement stores like Community Warehouse.

But the city has been unable to get a contractor reliably working to create a marketplace. The council originally imposed a requirement in 2018 that houses built before 1929 must be deconstructed, whether publicly or privately razed, and not demolished. But bids were coming in at levels that delayed work for the city. The city suspended the ordinance and sought to hire a contractor to perform the work. Spencer, after months of delay, got underway in November 2019 to great fanfare from the Common Council. Then things fell apart and the firm was fired.

Now the city will try again for the third time.

“We have issued just this past week a notice to proceed,” said DNS operations director Thomas G. Mishefske about White Glove in comments to members of the Joint Committee on Abandoned and Foreclosed Homes Monday morning. The firm has raze permits pending for city-owned homes at 2970 N. 22nd St., 2739 N. 17th St. and 2648 N. 17th St.

Get a daily rundown of the top stories on Urban Milwaukee
Approximately $981,000 is remaining to complete the pilot program according to Mishefske. Spencer was originally to be paid $1.2 million to deconstruct 50 homes.

White Glove was founded in 2002. The African-American-owned firm is led by London Thomas.

Alderman Robert Bauman, the council’s leading deconstruction advocate, has been critical of the administration’s implementation of the program. In 2019 he accused DNS and other city departments of spending the summer “shuffling paper” which prevented Spencer from starting. A charge which DNS levied back at Spencer.

Now Bauman says the department, via a memo to a council committee, is providing inaccurate information. “You give all these arguments against deconstruction, but you don’t mention any of the benefits,” said Bauman of Mishefske’s memo. “All you give is the negatives to the Finance & Personnel Committee.”

“We still want to create jobs don’t we?” asked Bauman.

“Those attributes are already listed in the ordinance,” said Mishefske. He said White Glove would draw down the remaining funds to do the work.

That didn’t appease the alderman, who also serves as the joint committee chair.

“This is not accurate and the council should receive accurate information,” he said.

According to a DNS report from October 1st, there are 407 structures in the city with pending raze orders. A total of 217 of those structures are city-owned. Approximately 11% of the structures are classified as emergency (four) or high priority (33) to be razed based on their condition.

Not all structures with raze orders are ultimately razed. A house in the Merrill Park neighborhood was salvaged by a resident with city support. An apartment building in Walker’s Point is being redeveloped. A number of other structures will ultimately be repaired.

While the private industry deconstruction requirement is suspended, a handful of voluntary projects have taken place. Milwaukee Bucks guard and real estate developer Pat Connaughton led the successful deconstruction of an 1860s home on the north end of Downtown earlier this year.