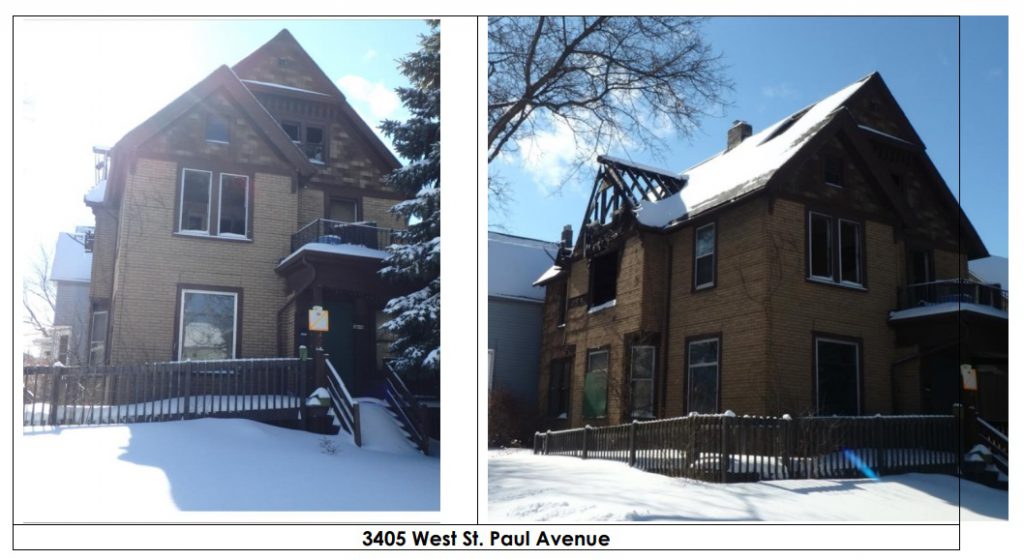 A fire-damaged, city-owned home slated for demolition will be saved from the wrecking ball under a plan by Hunger Task Force executive director Sherrie Tussler.

“Every morning I wake up and see a burned-out house across the street from my house,” said Tussler at a Tuesday morning meeting of the Common Council’s Zoning, Neighborhoods & Development Committee.  Though the house is condemned, the city does not have enough funding available to demolish all such properties in Milwaukee.

The 1890 home, located at 3405 W. St. Paul Ave., was acquired by the city through property tax foreclosure in January. It will gladly sell the home to Tussler for $1.

Tussler will also receive $25,000 from the city’s Housing Infrastructure Preservation Fund and will be eligible to receive the grant once she receives a Certificate of Occupancy on the rehabbed house.

It will be the fourth time she has saved a city-owned, deteriorating home in the city’s Fourth Aldermanic District. That has area alderman Robert Bauman singing her praises. “You have a model here that I wish we could replicate across the city of people buying in their neighborhood and renovating in their neighborhood,” said Bauman. “Congratulations, you’re doing great work.”

Alderman Jose G. Perez also praised Tussler for the care she put into a home near his south-side district.

A city report says the home has been vacant for several years. Photos in the city’s Land Disposition Report show a building exposed to the elements with a substantial section of its roof missing.

Tussler, who has led the Hunger Task Force since 1997, intends to sell the home to an owner-occupant. It has 1,902 square feet of space according to city records.

About the Housing Infrastructure Preservation Fund

Bauman sponsored the creation of the Historic Infrasture Preservation Fund in 2009 with then-alderman Willie Wade. The 2019 city budget allocated $100,000 in new borrowing for the fund. The city budgeted $2.75 million for demolition and deconstruction.

“The city currently has far too many properties in its inventory that are in need of some restoration and rehab work to get them ready for sale, but there’s no money available to do that work,” said Bauman in 2009. “The Housing Infrastructure Preservation Fund now can provide that critical, dedicated funding to help turn these properties around, thereby preserving the city’s tax base, avoiding demolitions and increasing the city’s residential housing stock.”