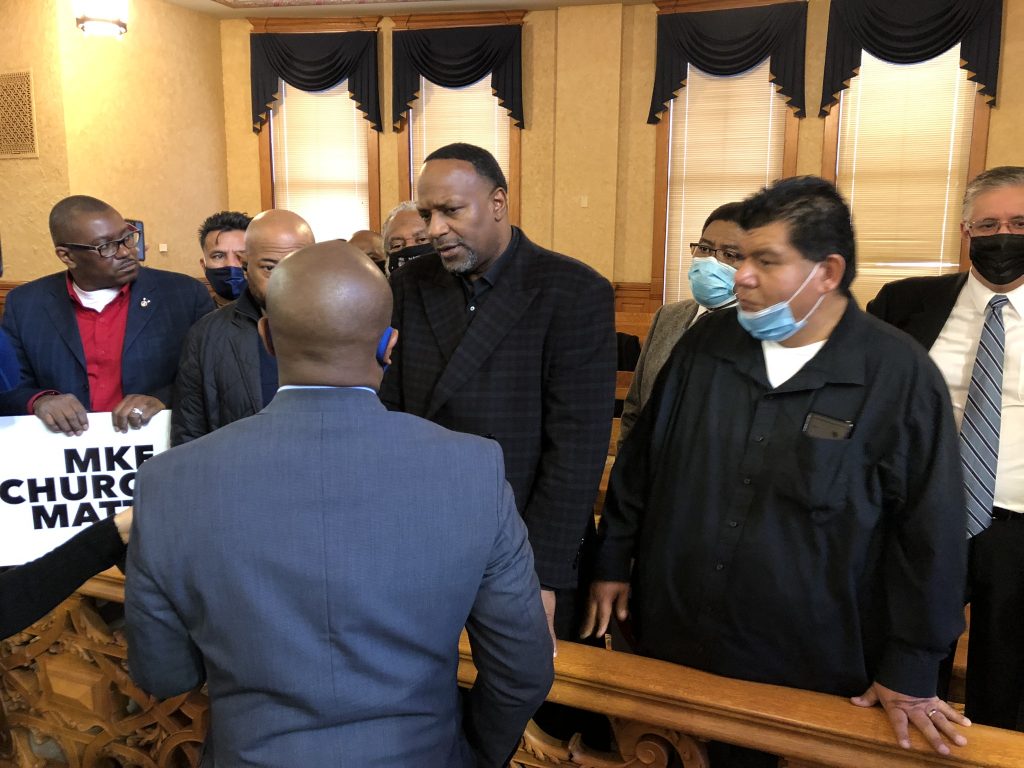 A coalition of pastors interrupted a Milwaukee Common Council meeting Tuesday morning by marching onto and around the council floor.

Led by Milwaukee pastor Steven Tipton and Indiana-based Rainbow PUSH Coalition member bishop Tavis Grant, a couple dozen protestors circled the council floor singing “We Shall Not Be Moved,” carrying “MKE Churches Matter” signs and calling for an end to what they say is a “tax & take” practice by city officials. State Senator Lena Taylor joined them in the protest action.

It’s just the latest move from a group of north-side pastors who say the city is unfairly levying property taxes against their churches. City officials, including Assessment Commissioner Steve Miner, have said they are attempting to enforce state laws and agree that churches complying with the laws should not be taxed.

A review of church property tax bills by Urban Milwaukee, and the pastors’ own testimony, reveals a series of issues being lumped into one. Some churches are failing to file a biannual form required by the state, causing their properties to be placed back on the tax rolls, others are failing to pay their water bills and other municipal fees, which are ultimately placed on an otherwise empty property tax bill and a third group is being partially assessed because portions of their properties are being leased to other groups or not used.

Pastors United leader Greg Lewis is demanding a moratorium on all of the actions. “You can’t tell me this is a state issue when it’s not,” he said last week. “Just shut it down for time for us to figure it out.” Lewis was one of the individuals marching on the council floor Tuesday.

During a rally on Nov. 30, Jesse Jackson joined Lewis, Tipton and others in calling for a lawsuit against the city.

Milwaukee Police Department officers guided the pastors off the floor after they completed a lap around the council members. Order was about to be restored when Alderman Russell W. Stamper, II and Black Panthers leader King Rick got involved in a shouting match. Stamper demanded Rick’s removal from the chamber, while Rick (given name Darryl Farmer) insisted he was going to sue Stamper, Council President Cavalier Johnson and others. Rick never went on the council floor. “If you arrest me you are going to have a problem,” said Rick, but Johnson and the officers said he wasn’t being arrested. Rick ultimately walked out of the chamber, but not before calling one of the council members a “hypocrite” and “idiot.”

Get a daily rundown of the top stories on Urban Milwaukee
After marching off the council floor, the pastors proceeded down a level to rally outside of Mayor Tom Barrett‘s office.

Both Barrett and Johnson, as well as a number of other council members, previously met with the coalition.

“The way I see it, the council has been responsive and listened to their concerns,” said Johnson in an interview after the council meeting. “Their message is heard loud and clear by council members.”

Johnson, alongside several other council members, walked over to the gallery to meet with the coalition before the meeting began.

The protest action comes after the council’s Finance & Personnel Committee spent nearly two hours discussing the issue last week. At that meeting Alderwoman Milele A. Coggs announced, to cheers, that she had requested the city’s inspector general prepare a report on the matter.

Johnson said he expects the city to be able to provide some form of relief, but he is not sure what form it will take.

The council eventually resumed its meeting, but not before the attorney for a business owner who was slated to lose his license left. The attorney was to present next in defense of his client.