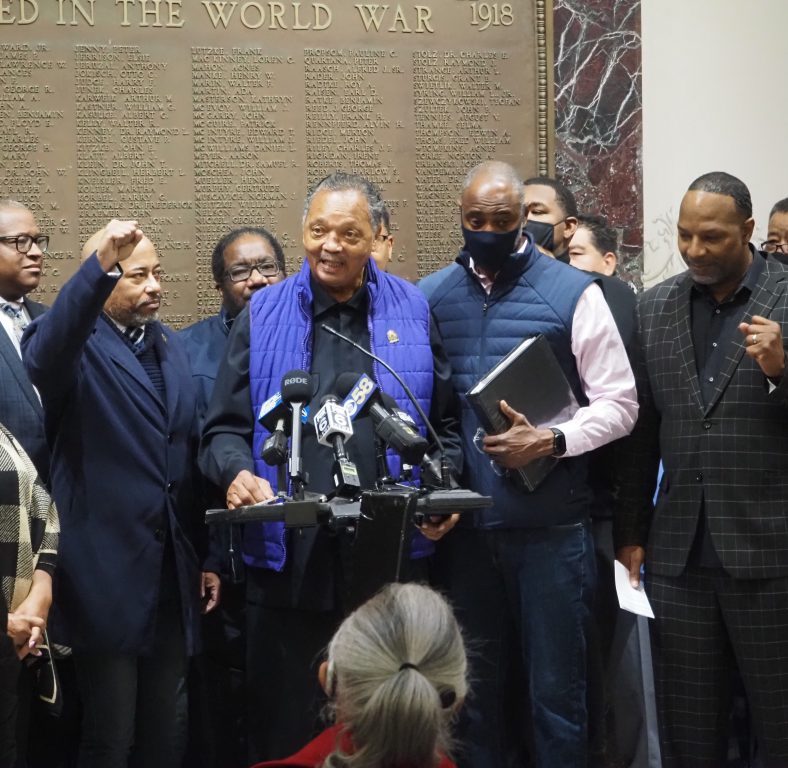 A group of Milwaukee pastors feels that the city is targeting them by “taxing and taking” their churches.

The City of Milwaukee has levied property taxes against entities that fail to complete the form.

El Bethel Church of God in Christ at 1501 W. Ring St. was one such entity that failed to complete the form. City assessment records indicate the city started taxing the property, at an assessed value of $47,500, in 2017. The resulting taxes went unpaid and the city foreclosed on the property in March. “They took my church during the pandemic,” said pastor Steven Tipton, the event’s emcee. He said the church ended up paying $16,000 to get the property back. “That’s not the city’s money, that’s God’s money.”

Get a daily rundown of the top stories on Urban Milwaukee
The website for El Bethel doesn’t list the church on Ring St. but El Bethel and Tipton also operate from 5401 W. Good Hope Rd., a property assessed at $650,000 that is tax exempt but is delinquent on municipal services and water bills.

“If one is taxed, all is taxed,” said Jackson, 80, in a wide-ranging speech that touched on the issue at hand as well as the Kyle Rittenhouse and Ahmaud Arbery trials and the need to be vaccinated. “Church owns property, it is tax exempt.”

Gregory Greiten, administrator of Our Lady of Good Hope Catholic Church at 7152 N. 41st St. and priest at St. Bernadette Catholic Church at 8200 W. Denver Ave., said the different buildings St. Bernadette owns are being treated unfairly by the Assessor’s Office. He said his congregation has two open lawsuits against the city regarding a former convent and a school building that are being taxed when the church feels they shouldn’t be.

Tax-exempt property owned by religious operators or other exempt entities can be taxed if it is leased to other users, including child care providers, or if it is no longer used by the exempt entity.

Pastor Greg Lewis, head of Pastors United and executive director of Souls to the Polls Milwaukee, led a march up to the second-floor office of Mayor Tom Barrett to deliver a letter demanding an end to the alleged “tax & take” practice.

Jackson was already in the office talking with mayoral staffers and awaiting Barrett’s return from the formal renaming of a Milwaukee Fire Department station.

Barrett, who returned after Urban Milwaukee left the building, is committed to reviewing the issue with the City Attorney to see what leeway exists and would support a change in state law according to a spokesperson. Jackson and Barrett previously spoke on the phone.

Assessment Commissioner Steve Miner cited the state statute in an email to Urban Milwaukee with regard to what guides the city’s practices. In an interview in advance of the rally, he told PrincessSafiya Byers that two churches were foreclosed on in 2020 and both have been returned to their prior owners. He attributed the issue to a lack of communication and unfamiliarity with the statutes by the churches.

Data from the Assessor’s Office, last updated in Sept. 2020, shows 252 non-responses from the 1,771 property owners required to fill out the form.

The two churches foreclosed on in 2020 were at 3029 N. 35th St., Grace Memorial Funeral & Cremation Services, and 2415 W. Fond du Lac Ave., Spiritual Israel Church. The 35th Street property was returned after the taxes and fees were paid and it is now listed as tax exempt. The Fond du Lac Avenue property was sold back to the prior owner for $10,000, under council direction, after the church failed to pay the back taxes in time. The resulting sale includes a payment in lieu of taxes (PILOT) agreement that requires the church to annually pay the estimated city and Milwaukee Public Schools portion of the property tax bill even if the property is designated as tax exempt.

One thought on “Jesse Jackson Blasts City’s “Taxing and Taking””