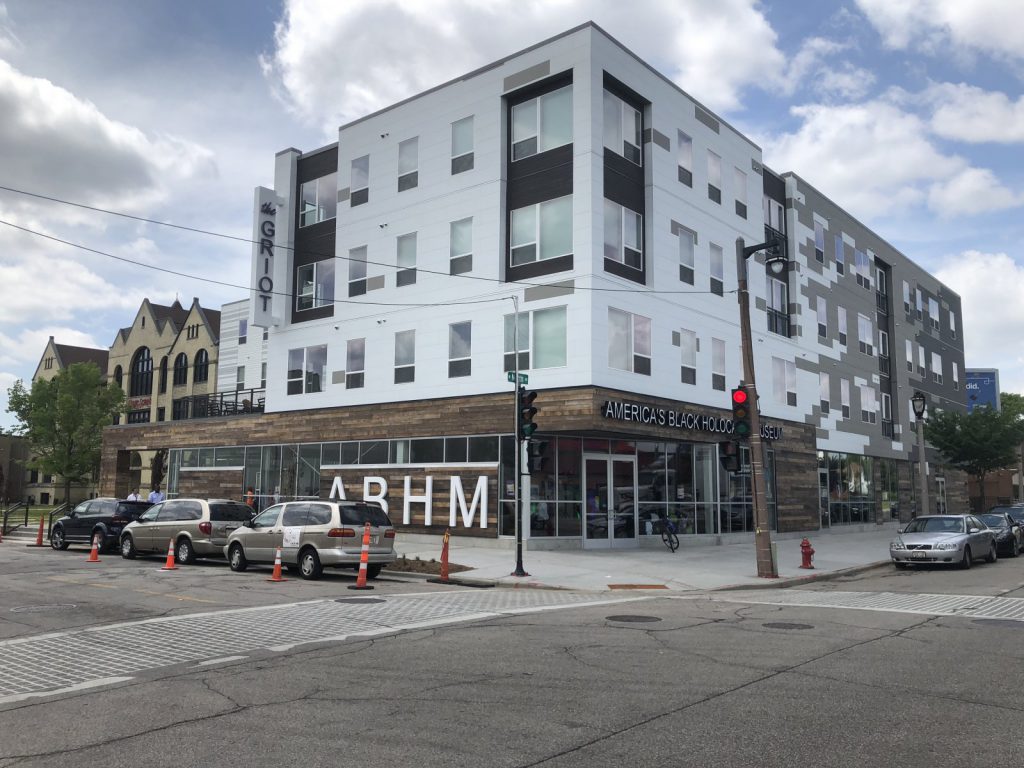 For the first time since 2006, you will be able to visit America’s Black Holocaust Museum in person.

The museum was founded in 1988 by James Cameron, a civil rights activist and only known survivor of a lynching. But after Cameron’s 2006 death the museum closed in 2008 amid financial difficulties. It will reopen on Feb. 25, on what would have been Cameron’s 108th birthday.

Under the leadership of Reggie Jackson, Brad Pruitt, and Fran Kaplan the museum reopened as a virtual-only experience in 2012 and found a future home on the first floor of The Griot apartments, 401 W. North Ave.

The apartment building, named for the term for a West African oral historian, was completed in 2018, but fundraising was not far enough along to reopen the museum. Then the COVID-19 pandemic introduced a new delay.

But, with masks on, community leaders gathered in the museum space Tuesday morning to announce the reopening timeline.

“This, ladies and gentlemen, is a momentous occasion,” said president and CEO Robert M. Davis. The former Zoological Society director was hired to lead the museum in 2019. “The number one reason that people wanted this museum to come back wasn’t me, it was Dr. Cameron.”

Get a daily rundown of the top stories on Urban Milwaukee
The museum’s exhibits cover the history of the African slave trade starting in the 1600s through the Civil Rights movement and modern impacts of slavery.

“The mission of this organization is to bring to light the things that have happened in the past,” said Davis. “This time more than ever the museum is important to us. Legislators are trying to prevent us from teaching our history in schools.”

Davis ticked off the many donors that have boosted the project’s fortunes, including anonymous donors through the Greater Milwaukee Foundation along with donations from Bader Philanthropies and Chris Abele.

Board chair Ralph Hollmon, retired head of the Milwaukee Urban League, was credited with leading the formation of a legacy circle of Black donors.

“It has been a collective effort from a number of people that has helped us get to this joyous, joyous reopening announcement,” said Hollmon.

“Now we have one more place for VISIT Milwaukee to promote,” said Deshea Agee, who championed the museum as head of the King Drive business improvement district before taking a job with Emem Group earlier this year.

VISIT Milwaukee president and CEO Peggy Williams-Smith said the neighborhood is already a top-five tourist destination in the city. “We are so excited to promote this,” she said.

“I am encouraged, I am elated, and I am happy that we are very close to the grand reopening of America’s Black Holocaust Museum,” said area Alderwoman Milele A. Coggs. “But it is the maintenance and the sustaining and the growing that we also must invest in.”

As of 2018, the museum had a $7 million fundraising goal which would not only cover building out a new, 6,000-square-foot museum but provide a $4 million endowment.

Cameron’s son, Virgil Cameron, has been involved in relaunching the museum, but was not in attendance at Tuesday’s event.

Missouri-based NMBL Strategies is supporting the project as a consultant.