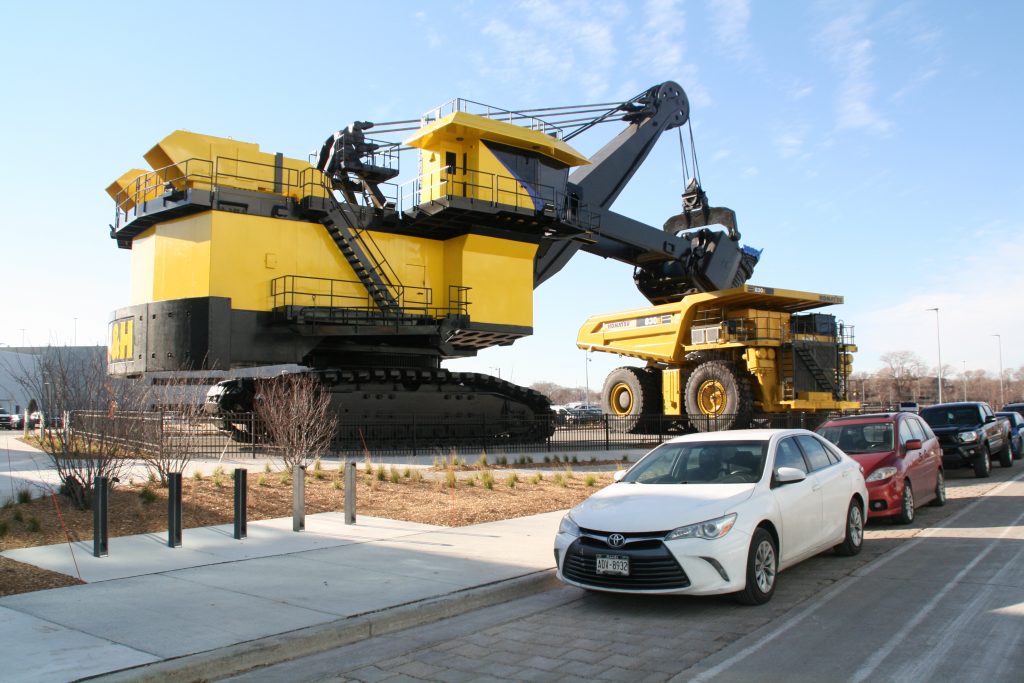 While Komatsu Mining has made headlines in recent weeks for an oil spill at its current campus in the West Milwaukee, the company is putting the finishing touches on its new facility, South Harbor Campus, in Milwaukee’s Harbor District.

The development, billed as the largest urban manufacturing facility under development in the United States, includes a 176,000-square-foot office building overlooking the inner harbor and a 430,000-square-foot factory. It will produce mining shovels, to be shipped in pieces, that weigh over three million pounds and can lift 120 tons at a time.

Those wishing to see the final product can now head to the site, located at the east end of E. Greenfield Ave. A large yellow shovel, the kind to be made at the plant, is set up in front of the office building. It looms over a truck that the company makes at a different facility.

The mining company is an arm of the multi-national conglomerate Komatsu. The Tokyo-based company boasts over 59,000 employees in 142 countries, but P&H has always called Milwaukee home. P&H, later known as Harnischfeger, was founded more than 137 years ago in Walker’s Point, less than a mile north of where the new campus is rising.

P&H first made cranes, and later, mining shovels. Owned by Komatsu since 2016, it has spent the past 100 years just outside city limits in suburban West Milwaukee at 4400 W. National Ave. That and office space leased in the Honey Creek Corporate Center on Milwaukee’s West Side will be vacated as part of the project.

The company will occupy a 59-acre campus on the south side of E. Greenfield Ave. that is bisected by Union Pacific railroad tracks. The 13-acre eastern portion of the site was last owned by the city and used to store coal for the Valley Power Plant, which now burns natural gas. The site houses the office building and parking garage. The western portion of the site was long home to Solvay Coke & Gas. An affiliate of We Energies acquired the 46-acre site in 2017 for $4 million to control the environmental costs of cleaning up the site, which used by one of its predecessor firms.

Get a daily rundown of the top stories on Urban Milwaukee
The state will provide $59.5 million in tax credits, tied to the creation of new jobs and other performance metrics. The city, leveraging incremental property tax revenue from the project, will invest $15 million in a lengthy new riverwalk segment and award up to $25 million to the company for job creation. Final design work on the riverwalk project is underway.

Komatsu, according to 2018 statements, hopes to have more than 1,000 employees at the site, but intends to start with approximately 600 in 2022, of which about 70 percent are expected to be office employees.

The state announced in March it is also providing Transportation Economic Assistance grants to fund the construction of a new railroad spur serving the complex ($1 million for a $2.4 million project) and the lowering of the roadway underneath a bridge on S. Kinnickinnic Ave. ($731,000 towards a $1.46 million project). The latter project will improve the clearance on the southern-most bridge known as the “KK Can Opener.” The two low railroad bridges have been known to rip off the tops of trucks driven by inattentive drivers. The project will allow truck drivers to access the campus via the W. Becher St. off-ramp on Interstate 94 without feeding the can opener. A similar project took place on E. Greenfield Avenue in 2019 to serve the northern half of the campus.

The City of Milwaukee will lead construction of the railroad spur and is seeking a contractor to build it. On Friday as Urban Milwaukee visited the site, a train went by on the seldom-used Union Pacific line. It contained a locomotive and a single boxcar.

Hunzinger Construction is leading the construction of the project. Eppstein Uhen Architects and engineering firm GRAEF are designing the campus. 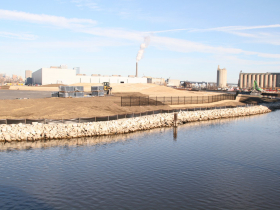 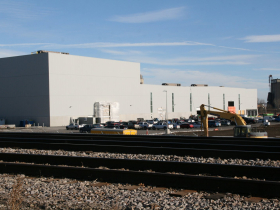 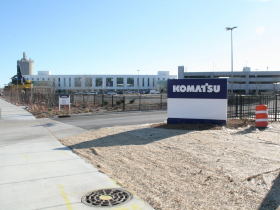 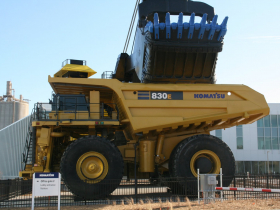 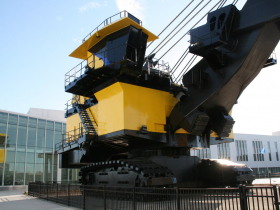 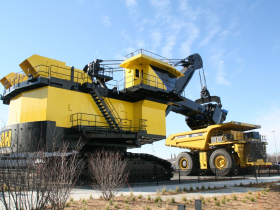