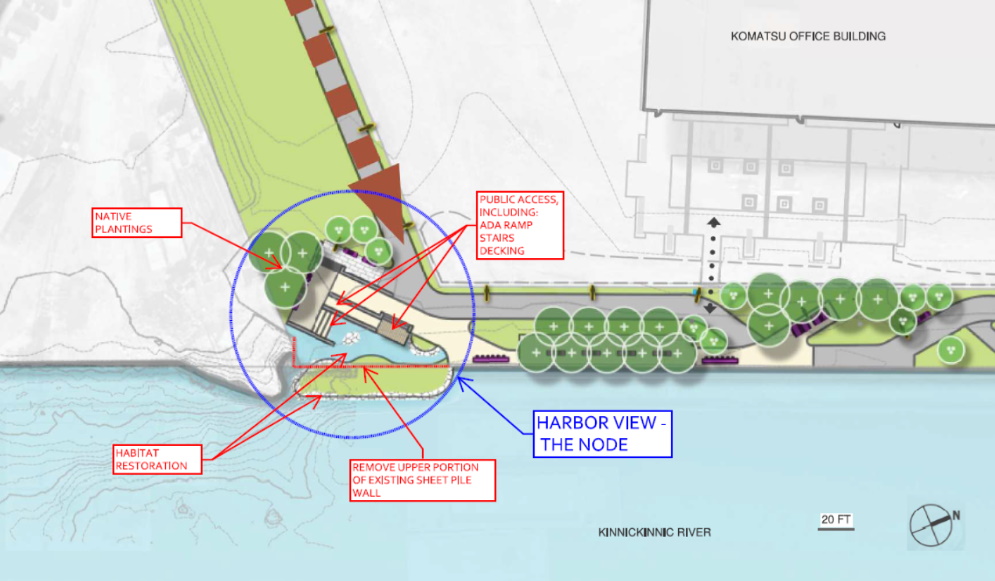 The Node along the Milwaukee RiverWalk. Rendering by SmithGroup.

The City of Milwaukee is planning a special “Node” along the proposed 4,300-foot-long Milwaukee RiverWalk segment in the Harbor District. The feature would allow the public to touch the water, while also creating an aquatic habitat and spawning zone.

“The intention here is to give people a way to access the water that is unheard of on the Milwaukee River and Kinnickinnic River,” said Department of City Development riverwalk project manager Alyssa Remington in presenting a grant proposal to the Redevelopment Authority of the City of Milwaukee board Thursday afternoon.

The city hired SmithGroup in April to lead the design work on the project, which will run along the inner harbor from E. Greenfield Ave. to S. Kinnickinnic Ave. It will be the longest segment planned and built at one time, and the longest segment owned by the city.

But following a community survey, initial planning and cost estimating, the vision for segment was expected to exceed the $11 million construction budget.

“We are looking now to pare things down a bit, but not without seeking additional funding,” said Remington.

“The Node,” to be located approximately 800 feet south of Harbor View Plaza, is one such feature DCD wants to keep. It would cost an estimated $460,000, with $150,000 to come from a Wisconsin Coastal Management Program grant.

“Fingers crossed it all goes well,” said the riverwalk manager of the grant application. She said the city has successfully secured grants from the program in the past.

Get a daily rundown of the top stories on Urban Milwaukee
At The Node the existing dockwall would be removed to create an approximately 3,000-square-foot inlet. But a new rip-rap rock wall would shield much of the inlet from a direct connection to the harbor, effectively creating a micro-harbor within the much larger harbor. The shielded water area would be configured with “habitat hotels” to encourage fish spawning. Native plantings would wrap the area. Stairs and accessible ramps would guide visitors down to the edge, where they could touch the water. The only other public water access is the boat launch at the north end of the inner harbor.

RACM board member Bill Schwartz asked how deep the water would be.

“I can’t imagine that it is going to be very deep,” said Remington, without giving a specific number. “But you’re right, safety would have to be taken into consideration.”

The city hopes to begin construction on the northern leg of the riverwalk, including The Node, in early 2022 and on the southern leg in 2023. The Union Pacific railroad tracks that run diagonally through the area divide the two legs.

“We have to fall behind We Energies‘ work on the inlet,” said Remington of the southern leg and a preexisting inlet. We Energies is performing environmental remediation work on the shoreline. Most of the site was owned by the utility before being sold to Komatsu Mining for its $285 million South Harbor Campus. The office building, which is adjacent to the northern leg, is now open. The factory, which is closer to the southern leg, will open next year.

RACM assistant director Dave Misky praised Remington’s work on the project and said the southern leg could eventually end up being built adjacent to a rip-rap wall instead of a traditional, vertical dockwall.

“It’s tied to these ‘Area of Concern’ initiatives we have been working on,” said Misky of the multi-party effort to remove the federal pollution designation on Milwaukee’s waterways.

“We are moving ahead with the design we can afford, but at the same time we are seeking the opportunity to enhance that,” said Remington.

One of those areas of potential enhancement is the pathway around a privately-owned parcel in the middle of the planned riverwalk. The riverwalk will need to wrap around the 1.2-acre waterfront parcel and cross the railroad tracks slightly inland to connect the two legs.

“It’s a lot of heavy equipment. It’s a lot of barges,” said Remington of the parcel’s use. The site does not have direct street access, instead relying on an easement along the railroad corridor. Komatsu constructed a skywalk over the tracks to connect its factory and office building.

The RACM board unanimously approved applying for the grant.

The city adopted design standards for a Harbor District riverwalk in 2020. 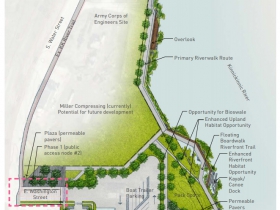 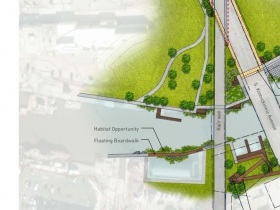 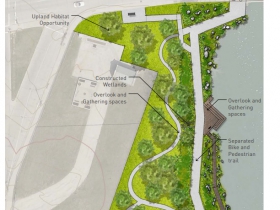 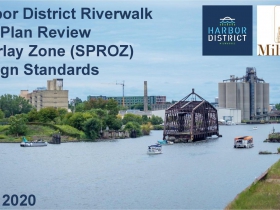 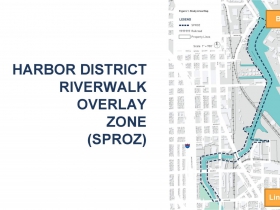 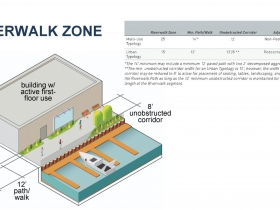 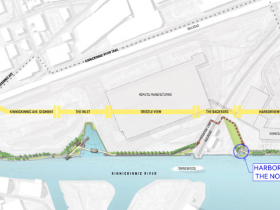 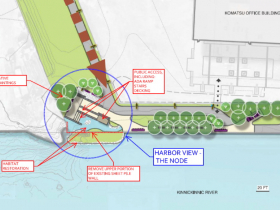