Updates on everything going on in Kenosha in wake of unrest. 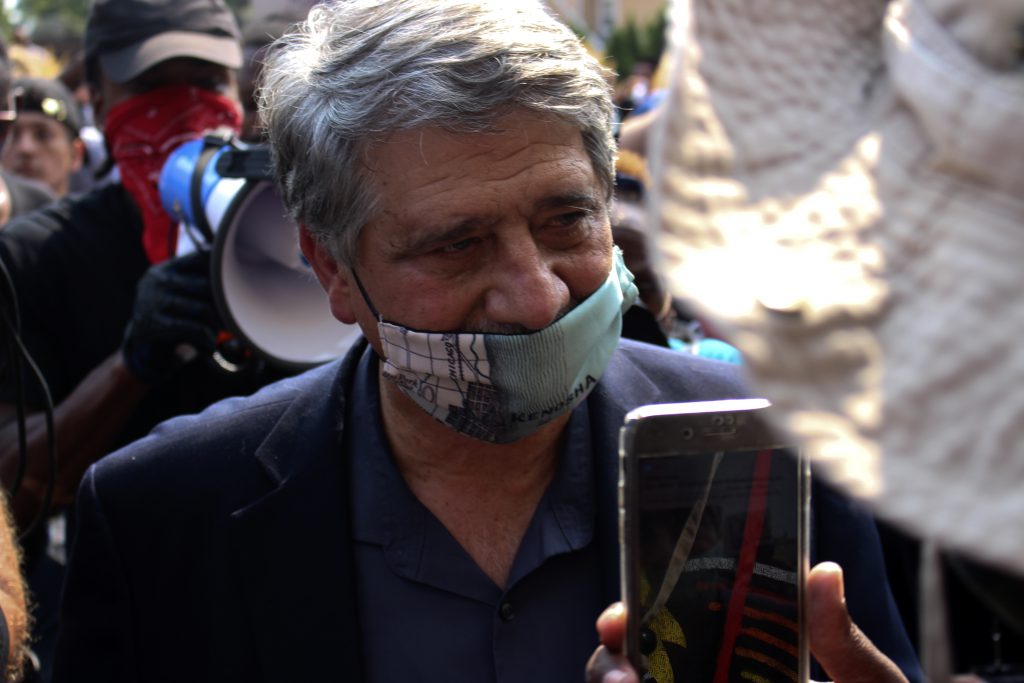 Mayor John Antaramian heads back inside after attempting to speak with protesters, a scuffle broke out shortly after. Photo by Henry Redman/Wisconsin Examiner.

As the City of Kenosha entered the second week since a police officer shot Jacob Blake in the back seven times, officials held a press conference in which they celebrated a weekend of peace and braced for the imminent arrival of President Donald Trump.

Trump is set to visit the city Tuesday despite pleas from local and state leaders to stay away.

“I think that you have a community that’s in the process of trying to heal,” Mayor John Antaramian said at the Monday press conference. “There’s so many things that have gone on in this community. It just seemed to me and others that it would be better for us to be able to pull together and for the community to get together and actually heal up the process of what’s going on. To start dealing with the concerns that we have that need to be addressed. So it would have been nice if it had waited a little while, a little longer down the road, but it is what it is.”

Representatives from the Kenosha Police Department were absent from the Monday press conference in order to work with the U.S. Secret Service and the White House to plan for Trump’s visit, according to a department news release.

The officials at the press conference, Antaramian, Sheriff David Beth, Wisconsin National Guard Adjutant General Paul Knapp and County Executive Jim Kreuser, said they couldn’t share any details about the president’s visit. Kreuser said he had not been contacted by the White House to set up a meeting with Trump.

On Monday morning, Trump tweeted that his actions saved Kenosha from further violence — a claim that local officials denied.

“If I didn’t INSIST on having the National Guard activate and go into Kenosha, Wisconsin, there would be no Kenosha right now,” Trump tweeted.

Kreuser said at the press conference he didn’t believe that Trump’s statement was accurate and officials said that the decision to send in National Guard troops from Wisconsin and other states was made by Wisconsin Gov. Tony Evers, who worked with other governors to get help. The governors of Michigan, Arizona and Alabama have sent military police companies into Kenosha, Knapp said.

In its press release, the police department shared information about arrests in the previous week.

As of Sunday afternoon, 175 protesters had been arrested with 102 of them coming from 44 cities outside Kenosha, according to the release. It’s not clear if that includes people from neighboring communities as officials attempt to push the idea that any looting or property destruction is coming from “outside agitators.”

On Friday, Antaramian rejected calls for the dismissal of the city’s police chief and the Kenosha County sheriff. The ACLU and the NAACP have been calling for both men to step down or be fired, based on the Aug. 23 police shooting of Blake and the failure to arrest a 17 year old who shot and killed two protesters and wounded a third on Tuesday night. The shooter is now in custody in Illinois.

“I think when you look at what has occurred over the last week, with all the activities going on, everyone is doing the best that they can,” Antaramian told a reporter at a Friday news conference when asked about the resignation demands. Antaramian said he would not seek to fire Kenosha Police Chief Daniel Miskinis and indicated he did not believe Sheriff David Beth should be fired, either.

On Thursday, Blake’s father told the Chicago Sun-Times that his son, who had been named in an arrest warrant stemming from before the Sunday incident, was shackled to his hospital bed with handcuffs. On Friday, an attorney for Blake’s family, Patrick Cafferty, told several new organizations that the handcuffs had been removed.

The Milwaukee County Sheriff’s Department issued a statement Friday afternoon reporting that Blake had been “released from custody” after bond was posted for an arrest warrant.

Friday’s press conference included calls from Antaramian, Kreuser, Beth, Miskinis and community leaders for the community to unite to rebuild areas damaged in rioting, as well as to heal divisions.

“We’re calling on all of its citizens, as well as its leaders and anyone that wants to come alongside of Kenosha to help us,” said Roy Peeples, a pastor in the community. “We’re going to chart a better course [for] Kenosha,” he added, expressing hope “that we can be a model for the world.”

Also on Friday, an extradition status hearing for Kyle Rittenhouse, 17, of Antioch, Ill., charged with shooting and killing two men and wounding a third Tuesday night, was put off until Sept. 25. Rittenhouse’s public defender told the court that his client was seeking a private attorney.

The Kenosha News reported that lawyers who have represented associates of President Donald Trump have issued statements offering to defend Rittenhouse. He faces two counts of homicide, one of attempted homicide and other charges. A Wisconsin arrest warrant sets his bond at $2 million.

The Christian crowdfunding site Give Send Go reported that a group called “Friends of Rittenhouse Family” had raised $276,482 for Rittenhouse’s legal defense as of Monday.

At Friday’s news conference, Miskinis said his observation at a Wednesday news conference that participants in Tuesday night’s protests were there past a 7 p.m. curfew was not intending to blame the victims who were killed that night.

“My comments were misconstrued,” he said. While he had spoken of “the curfew as a tool to keep people safe,” he continued, “in no way was my comment intended to suggest that by being out after curfew, that played a role in their deaths.”

Beth also walked back previous comments he made at a news conference on Thursday. Beth had described Wednesday night’s Kenosha protests as “very peaceful,” adding, “Tuesday night, not quite so peaceful, but not too bad” — making no direct mention of the shooting deaths.

At Friday’s news conference, he began by telling reporters that “my daughter reminded me that there was one thing I forgot to mention” in the previous press conference: “the three people that were shot  on Tuesday night.”

He continued: “I would like to point out how very sorry I am that two people lost their lives. One is seriously injured.” Referring then to Blake, he added: “The young gentleman on Sunday night was shot, too. For all the loss of life, for all the injuries I feel really bad it happened here in Kenosha.”

Both Beth and Miskinis rejected the idea that the police or sheriff’s department had been overly friendly to firearm-toting people who descended on the downtown Tuesday night, ostensibly to protect the area from property damage. They also defended the failure of officers to arrest the gunman, reiterating that the confusion and chaos made it hard for officers to see who had fired the shots.

In another answer that sparked a fresh round of criticism of Beth, the sheriff said he has yet to watch the widely circulated video of Blake being shot by Kenosha police. When a reporter asked whether that in itself was a problem, he did not answer and turned the podium over to another speaker.

Video obtained by Up North News showed a protester showing Beth a video. On Monday, Beth said that a person was showing him the video on a phone while at the scene, but that he was distracted by the crowd and people throwing objects at him — including a molotov cocktail. The video of Beth watching the video does not appear to show any objects being thrown toward him.

Antaramian on Friday reiterated his previous statements that he doesn’t want armed civilians to come to the city thinking they will protect it from more damage: “I’ve made it really clear: I do not want you here. I do not expect you to be here. Go away.”

Miskinis had no update on an incident that has sparked widespread — and divergent — reactions on social media, when police, aided by federal Bureau of Alcohol, Tobacco and Firearms agents, took a group of people in three vehicles into custody on Wednesday.

Videos of the arrest were widely shared on Twitter and elsewhere, and a Seattle-based group called Riot Kitchen stated that the arrest was of their volunteers. The group is a volunteer kitchen that provides free meals to activists, including at protests, and said a team en route to Washington, D.C, was diverted to Kenosha to support people taking part in demonstrations against the Blake shooting.

On Thursday afternoon, the Kenosha Police tweeted a press release about the incident, which claimed that the arrest took place as people were filling gas canisters. The press release, which did not name any people or the RiotKitchen206 group, stated that in the van police found “helmets, gas masks, protective vests, illegal fireworks, and suspected controlled substances.”

On Friday, Jennifer Scheurle, a representative of Riot Kitchen, issued a statement about the incident, calling Wednesday’s action “a violent arrest at a gas station where our people refueled vehicles and got gas for our generator.”

The statement continued: “We reject all claims that our crew was there to incite violence or build explosives — our nonprofit organization has always been and will always be about feeding people. Our crew was arrested by officers who did not identify themselves with drawn guns. Our volunteers were thrown into holding cells and kept for hours without water or blankets and denied phone calls to their loved ones. Right now, we are focused on getting everyone out safe.”

Scheurle told the Wisconsin Examiner Friday afternoon that everyone in the group had been released. Jail records showed they had been charged with misdemeanor disorderly conduct.