Rittenhouse Found Not Guilty on All Counts

He faced five charges, including first degree homicide, for shootings during 2020 protests in Kenosha.

By WPR Staff, Wisconsin Public Radio - Nov 19th, 2021 02:48 pm
Get a daily rundown of the top stories on Urban Milwaukee

Kyle Rittenhouse has been found not guilty on all charges stemming from his shooting of three people and killing two during police protests in Kenosha last year.

A jury of what appeared to be seven white women, four white men and one man of color took nearly four days to render their verdicts. The original jury pool included 18 people, but was reduced to 12 people Tuesday morning when Rittenhouse used an old-fashioned wooden tumbler and pulled six jurors’ numbers to serve as alternates.

As the verdict was read, Rittenhouse, 18, cried. Once all verdicts were read, he fell to the floor and had to be picked up and set in his chair.

His mother, Wendy Rittenhouse, sat in the courtroom throughout the more than two-week trial. The Rittenhouse family appeared in the court for the first time Friday since Monday. They immediately left after the verdict was read.

The family of the men Rittenhouse killed, Joseph Rosenbaum, 36, and Anthony Huber, 26, held hands while sitting in the courtroom, appearing shocked and heartbroken while hearing the not guilty verdicts being ticked off one by one.

Huber’s parents didn’t attend the trial because it was too difficult to repeatedly watch a video of their son being killed, they said in a statement released after the verdict. The outcome of the trial sets a dangerous precedent, they said.

“It sends the unacceptable message that armed civilians can show up in any town, incite violence, and then use the danger they have created to justify shooting people in the street. We hope that decent people will join us in forcefully rejecting that message and demanding more of our laws, our officials and our justice system,” they said.

They love their son, and they’re proud of him for sacrificing his life to protect others, they added.

Some family of Jacob Blake, the Black man who was shot by Kenosha police on Aug. 23, 2020, two days before Rittenhouse came to Kenosha, was outside the courthouse while the verdict was read. Justin Blake, Jacob’s uncle, was there during the trial and verdict.

Earlier this week, Justin said he wanted people to focus on the two men killed by Rittenhouse.

“To see these young men lose their lives, to see their families have to go through worse than we went through, to see the weakness and the underbelly of this country and how the racism runs from the courtroom to the police station to the mayor’s office — they all have blood on their hands for the mishandling of that whole entire night,” Justin said after the verdict.

As the verdict was read, the crowd outside the courthouse began to swell. Vehicles began to drive by honking, and some people expressed happiness with the verdict. Three helicopters hovered above.

“The jury, representing our community, has rendered its verdict in the Kyle Rittenhouse case,” said lead prosecutor Thomas Binger. “While we are disappointed with the verdict, it must be respected. We are grateful to the members of the jury for their diligent and thoughtful deliberations. The Kenosha community has endured much over the past 15 months, and yet we remain resilient and strong.”

He asked community members to express their feelings about the verdict in a peaceful manner. 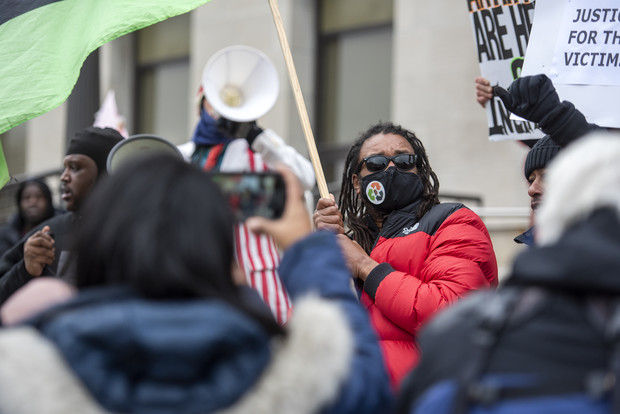 Justin Blake, Jacob Blake’s uncle, stands with fellow protesters on the steps of the Kenosha County Courthouse as the jury begins to deliberate in the Kyle Rittenhouse trial Tuesday, Nov. 16, 2021, in Kenosha, Wis. Angela Major/WPR

Prosecutors and defense attorneys presented radically different depictions of Rittenhouse’s actions and motivations on the evening of Aug. 25, 2020, when he shot and killed Rosenbaum and Huber, and wounded Gaige Grosskreutz. Prosecutors called him a “chaos tourist” whose recklessness cost two lives. Defense attorneys described him as “a 17-year-old kid out there trying to help this community.” 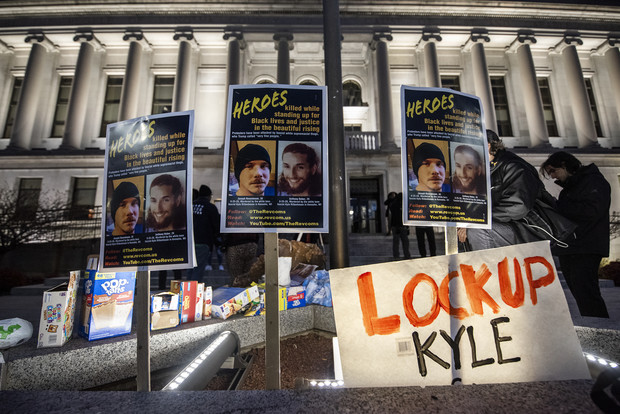 Signs are posted outside the Kenosha County Courthouse during the Kyle Rittenhouse trial Wednesday, Nov. 17, 2021, in Kenosha, Wis. Angela Major/WPR

The Rittenhouse case has captured national attention because it grapples with issues of policing, race and the right to self-protection.

The two-week trial featured dramatic testimony, as well as extensive footage of the shootings used by both the state and the defense. Rittenhouse took the stand last week, insisting he had fired only to defend himself.

The trial was marked by combative exchanges between Schroeder and lead prosecutor Thomas Binger. And many of the judge’s rulings have appeared to favor the defense. 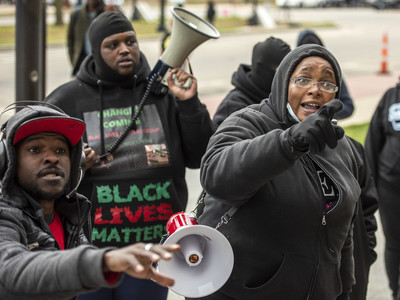 Kenosha resident Elizabeth Webb, who is Black and works for an organization called My Sister’s House,  was outside the courthouse Tuesday. She said “the ignorance and bias” she’s seen in the courtroom has been “appalling.” Webb said that if her son was in front of the judge trying Rittenhouse, he wouldn’t get the same treatment.

Politicians took to social media to share their frustration or agreement with the verdicts, falling on party lines. Democrats expressed displeasure over the not guilty verdicts but also called on people to remain peaceful and honor the lives lost. Republicans said the trial was fair and the outcome was the right one.

“No verdict will be able to bring back the lives of Anthony Huber and Joseph Rosenbaum, or heal Gaige Grosskreutz’s injuries, just as no verdict can heal the wounds or trauma experienced by Jacob Blake and his family,” Democratic Gov. Tony Evers said in a statement. “No ruling today changes our reality in Wisconsin that we have work to do toward equity, accountability, and justice that communities across our state are demanding and deserve.”

He pledged to continue fighting gun violence and disparities facing Wisconsinites and echoed the sentiment that Kenoshans are resilient.

U.S. Senate candidate and Lt. Gov. Mandela Barnes said the ruling was an example of the “difficult road to justice in America.”

“Over the last few weeks, many dreaded the outcome we just witnessed,” he tweeted. “The presumption of innocence until proven guilty is what we should expect from our judicial system, but that standard is not always applied equally.”

“I believe justice has been served in the Kyle Rittenhouse trial. I hope everyone can accept the verdict, remain peaceful, and let the community of Kenosha heal and rebuild,” Johnson wrote.

Gubernatorial candidate and former Lt. Gov. Rebecca Kleefisch wrote on Twitter that the justice system worked how it should.

“The prosecution in the Kyle Rittenhouse trial was a complete disgrace,” she wrote, “praising the mob who burned our streets as ‘heroes.'”

3 thoughts on “Rittenhouse Found Not Guilty on All Counts”