Rittenhouse Feared His Rifle Endangered Him

His case adds to data showing proliferation of guns makes us less safe.

There is a widely shared notion among gun owners that carrying a gun makes one safer. This claim has been widely promoted by the NRA and other members of the gun lobby. It is, however, overwhelmingly rejected by researchers who study the use and abuse of guns.

Last summer’s events in Kenosha and the subsequent trial of Kyle Rittenhouse illustrate how the presence of a gun, rather than offering safety, can lead to increased danger, including to the gun’s owner.

As is well known, 17-year-old Rittenhouse drove to Kenosha from his home in Antioch Illinois and secured an “AR-15-style” rifle. His aim, he told others, was to prevent property damage and render first aid. He ended up shooting three people, two fatally.

Who is responsible for the Kenosha tragedy? I would direct the reader’s attention to the Wisconsin legislators who over the years have systematically disassembled the state’s laws aimed at regulating the carrying and use of firearms, a process that is ongoing today.

Rittenhouse’s first victim, Joseph Rosenbaum, was described as “deeply disturbed” in one account. Recently he had been released from a Milwaukee hospital after his second suicide attempt. A witness told the jury that Rosenbaum had taunted him and a group of armed people like him who came to the area to defend the local businesses. “After he had done that a few times, I turned my back to him and ignored him,” the witness said, dismissing Rosenbaum as “a babbling idiot.”

At his trial, when asked why he shot the unarmed Rosenbaum, Rittenhouse responded, “If I would have let Mr. Rosenbaum take my firearm from me, he would have used it and killed me with it and probably killed more people.”

Following Rosenbaum’s death, Anthony Huber chased Rittenhouse, threw his skateboard at him, and was shot dead.

Gaige Grosskreutz was the third victim. He was a medic who carried a pistol. Apparently, both he and Rittenhouse pointed their guns at each other. Grosskreutz hesitated. Rittenhouse fired, giving Grosskreutz a serious arm wound.

In bringing his rifle into Kenosha, Rittenhouse made Kenosha more dangerous for others. He also made it more dangerous for himself. From his testimony, it is evident he feared that the three people he shot intended to seize the rifle and use it against him.

A previous Data Wonk column published October 21 looked at data on the revived Milwaukee Homicide Review Commission Dashboard. Since then, gun violence has continued to grow in Milwaukee. The chart below, taken from the dashboard, shows the number of homicides victims (in blue) and nonfatal shootings (in green) through October of this and previous years. Since that earlier column, Milwaukee has had an additional 145 nonfatal shootings and 42 firearm homicides.

As before, over half the shootings for which a cause is identified result from an argument or fight. With the wide availability of guns, a dispute easily leads to a shooting. 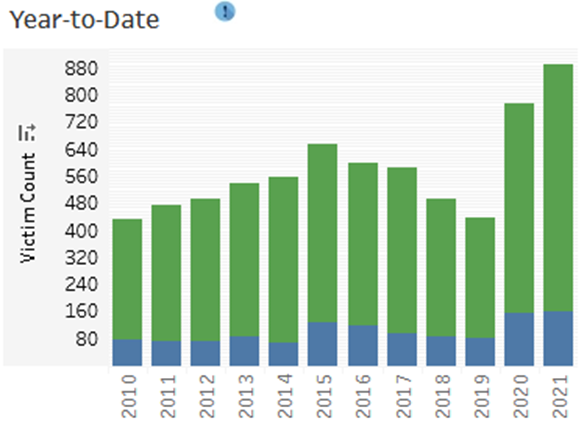 Homicides victims (in blue) and nonfatal shootings (in green).

A search on the internet will turn up numerous web sites that claim that guns make us safer. That, however, is not the predominant view of serious researchers in the field. In 2015, Harvard’s David Hemenway sent out surveys to people who had published research on the use and abuse of firearms and received 150 responses. The consensus is overwhelming: the presence of a gun makes people less safe.

Rather than make Rittenhouse more secure, his gun added to his worries. His fear that his rifle would be seized and used against him helped convince him to shoot his pursuers. 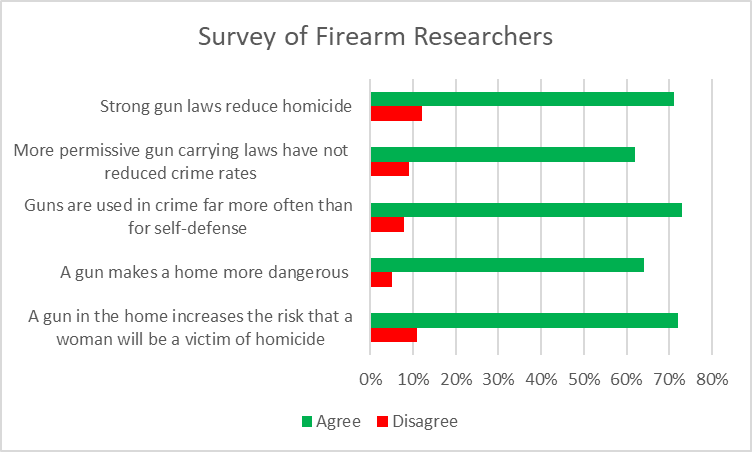 For years, federal law prohibited the U.S. Department of Health and Human Services agencies from using funds for research that could be interpreted as promoting or advocating for gun control. This law essentially shut down most research on the societal impact on guns. (In addition, the prohibition was a tacit admission that the conclusions of such research were likely to be averse to the interests of the gun lobby.)

What the Rittenhouse case shows is that people with guns are a menace to themselves and people around them. That is particularly true amid a protest.

Yet rather than reducing the prevalence of guns in protests and elsewhere, Republican legislators continue to introduce bills to further reduce the already weak Wisconsin rules. Currently, AB669 would eliminate the requirement that people carrying a concealed weapon have a license, AB293 would exempt Wisconsin manufactured guns and ammunition from federal regulations, and SB570 would limit the liability of firearm, firearm accessory, and ammunition manufacturers, distributors, importers, trade associations, sellers and dealers.

At the Rittenhouse trial, a Kenosha police officer testified that there were probably more people armed with weapons than not, throughout the entire course of the civil unrest. Under current Wisconsin law, these people—and their guns—had every right to be there. The striking thing about this case is that Rittenhouse viewed his own rifle as a threat to his life.

5 thoughts on “Data Wonk: Rittenhouse Feared His Rifle Endangered Him”