Data on gun violence indicates a correlation between proliferation of firearms and increased gun violence.

Last week’s article on Milwaukee’s gun violence dashboard summarized some of the data related to Milwaukee’s current spike of homicides. This column looks further at the weapon responsible for most of the deaths and injuries.

The next pie chart summarizes the manner of death between 2006 and today. The dashboard offers a total of eight categories, as shown below.

The three categories of firearms accounted for 99.5% of deaths or injuries to Milwaukeeans. Thus, Milwaukee’s epidemic of violence is more accurately described as an epidemic of gun violence.

Together, the other five categories total half a percent. Although they were included when making the pie chart, they are too small to be spotted on the chart.

Furthermore, 83% of the violence total involved handguns. It is also likely that most of the unknown firearms were handguns. Thus, the crisis of violence is really a handgun crisis. 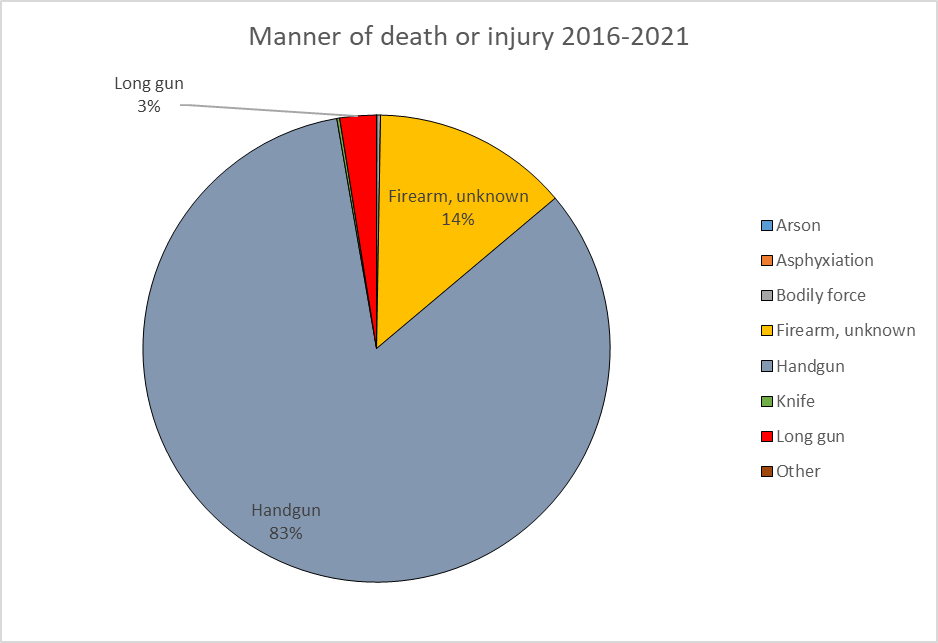 It is also notable that long guns, which would include hunting rifles, accounted for only 3% plus some number of the unknown firearms. A focused strategy to get handguns off the streets of Milwaukee and other cities would have little effect on guns used for hunting.

Does carrying a gun make one safer? This argument is widely endorsed by the gun lobby and certainly animates many of the people who carry a handgun or keep one in their car. However, most scientists who study firearms believe that the available evidence points to an increased likelihood of homicide when persons with and without access to firearms are compared.

According to the dashboard, most homicides start with an argument. In 2020, a shooting outside of a nightclub in the Historic Third Ward began this way, as the Milwaukee Journal-Sentinel reported, “witnesses told police it began with the two men arguing over whose high school had the better basketball team.” It escalated to the point that one pulled out a gun and killed the other. This appears to be much more common than intentional murders in which one participant sets out to deliberately kill the other.

In 2019, an analysis was published that compared firearm homicides in the United States to those in 29 other high-income nations using data for 2015 (or 2014 when data for 2015 was not yet available) from the World Health Organization’s Mortality Database. This study updated earlier analyses using data from 2003 and then from 2010.

The U.S. homicide victims also appear to follow the pattern of those living in Milwaukee, peaking between the ages of 15 and 34. 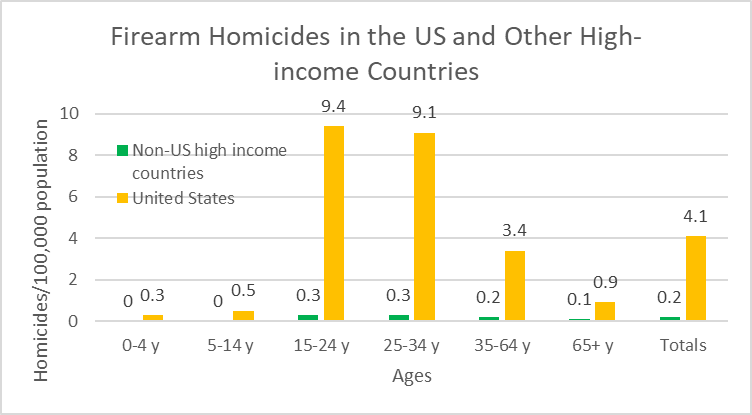 Firearm homicides in the U.S. and other high-income countries

The peak for Americans gets even larger when isolated for males. As the next graph shows, overall, seven men in the U.S. are murdered per 100,000 people compared to 1.2 for women. The pattern that the Milwaukee dashboard reports looks very similar to that for the whole U.S.: males between the late teens and the early 30s are particularly at risk of being murdered.

Once again, homicide rates in other countries are much lower than those in the United States. 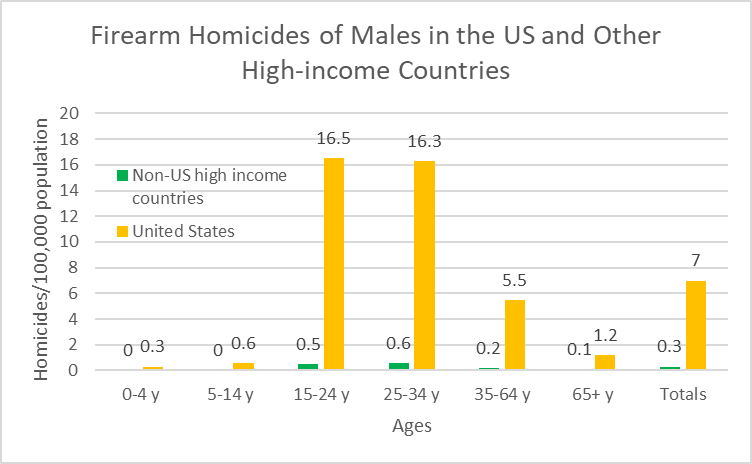 Firearm homicides of males in the U.S. and other high-income countries

Given these high numbers for handgun homicides in the United States, one might expect that American institutions would concentrate on finding strategies to bring them down. Here are three bills recently introduced by members of the Republican majority of the Wisconsin state legislature:

(In something of a switch, many of the same legislators are co-sponsoring AB 321 which would add people convicted of domestic violence to the list of those prohibited from owning a gun.)

The fact that all other high-income nations have a level of gun violence that is far below that in the United States gives strong evidence that the American gun epidemic is not some inherent state of nature. Rather, it is the result of decisions by people in authority. Not only Wisconsin’s Republican legislative majority, but politicians throughout the nation share responsibility.

The U.S. Supreme Court deserves prime responsibility. First, its Heller decision rejected the previous consensus that the Constitution’s Second Amendment only applied to military matters. Instead, the court extended the amendment to individuals wanting a gun for protection. States like Wisconsin which previously banned concealed carry–and enjoyed lower murder rates–subsequently repealed those laws.

Today, in the view of many observers, the court is poised to rule against state laws limiting the right to carry a concealed handgun.

Imagine that an enemy of the United States wished to maximize the rate at which American’s kill each other. How would the resultant strategy differ in effectiveness from the policies actually being implemented?