Why is Milwaukee’s Murder Rate Increasing?

Systemic problems, the COVID-19 pandemic and policing failures appear to be responsible.

Milwaukee, like other American cities, is experiencing a peak in firearm shootings, fatal and nonfatal. This can be seen in the graph below in which nonfatal shootings are shown in blue, homicides by firearm in green, and other kinds of homicide in red. The numbers on the chart are the annual totals of all three between the years of 2010 and 2020. Last year’s surge in shootings ended a string of declining homicides and nonfatal shootings. 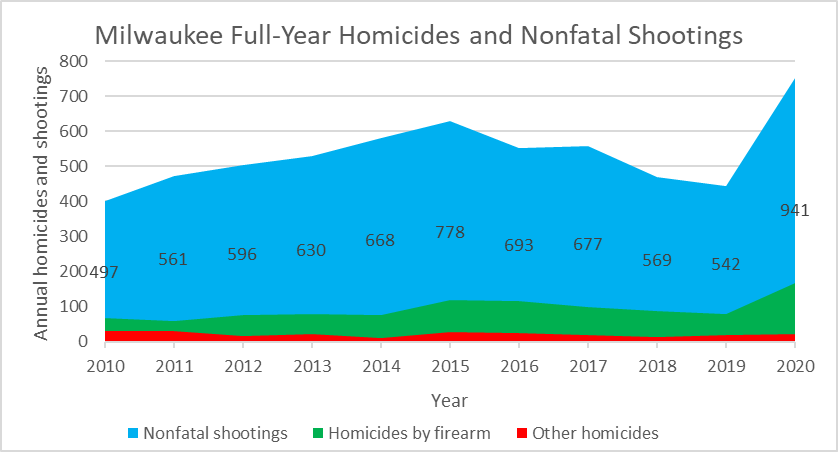 Year-to-date data, in the graph below, show that the surge is continuing. So far this year, homicides and nonfatal shootings are double the rate from two years ago. 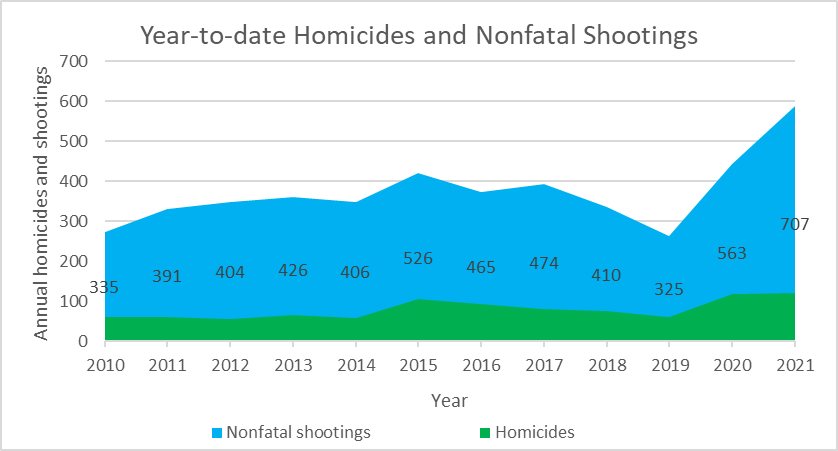 These numbers and those that follow come from a recently released dashboard from the Milwaukee Homicide Review Commission and the Medical College of Wisconsin. Up until 2015, the commission published a semi-annual report on shootings, and their victims and suspects. In 2015, the reports stopped. As a believer that solutions to problems start with data, I was disappointed by that decision. It is good to have it back, especially in the midst of a crisis in shootings.

The dashboard also has considerable data on Milwaukee’s 316 identified suspects and 778 victims so far in 2021. It is striking how similar they are.

For example, the next graph summarizes the race, ethnicity, and sex of 2021’s suspects and victims identified so far. 12% of both suspects (shown in green) and victims (in yellow) were white. 88% of both were Black. The fractions of Hispanic suspects and victims were also similar. (Although there is space on the dashboard for Asians and Native Americans, apparently none were involved in these incidents.

Not surprisingly, the story is somewhat different for the sexes. A female is more likely to be a victim of violence than a suspect. That said, she is much safer than is a male.

Demographics, Ethnicity, and Gender of Suspects and Victims

For comparison, here is a breakdown of the Milwaukee population by demographics based on data on the city’s website. It is notable that Black people are way overrepresented among both suspects and victims of violence, while white people are underrepresented.

It is worth noting that the dashboard and the city’s website differ in their treatment of Hispanics. The chart below treats Hispanics as a separate category, along with whites and Blacks. By contrast, the review commission adopts the increasingly common practice of treating it as an ethnicity in a separate overlay. Thus, Hispanic suspects and victims would also be included among the whites and Blacks. 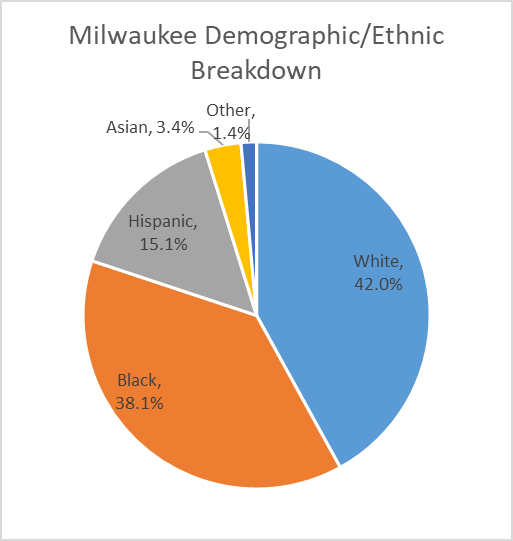 In addition to closely matching by race and ethnicity, victims and suspects also match each other by age, as shown by the graph below. The person most in danger of becoming a victim of violence is a young adult Black male. 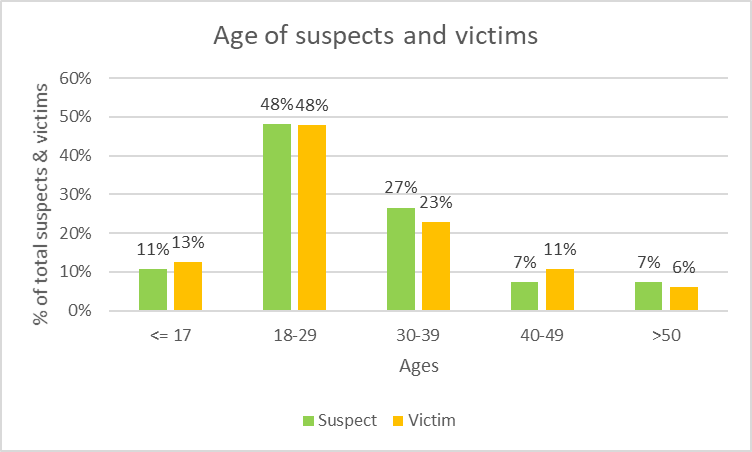 Age of Suspects and Victims

The amount of violence varies widely from one neighborhood to another. The next scatter plot shows homicides versus nonfatal shootings for Milwaukee’s fifteen Common Council districts. Districts 15, 7, 6, 1, and 2, the five districts shown in the upper right corner account for three quarters of both. 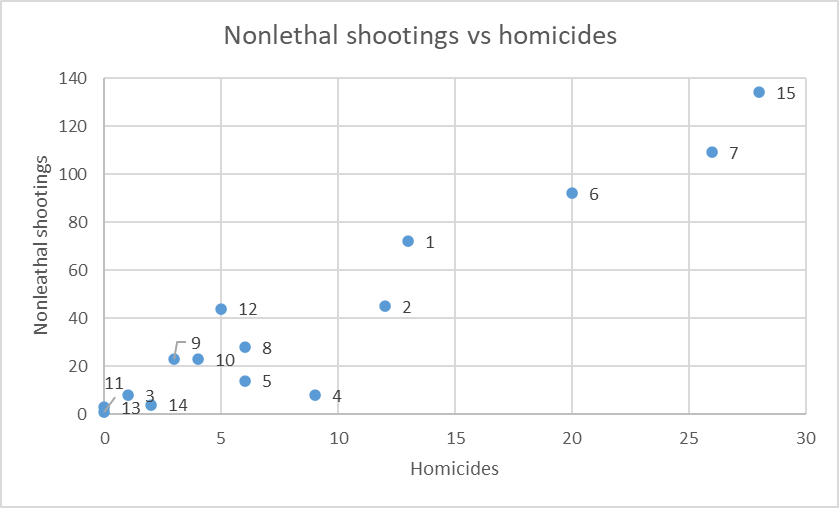 The map below shows the locations of the Common Council districts. Given the previous discussion about racial disparities, it is not surprising that districts 15, 7, 6, 1, and 2 are also the districts with the highest percentages of Black residents. 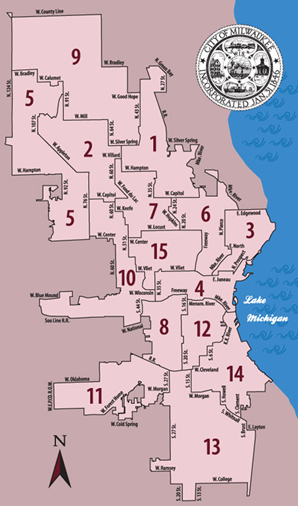 By contrast, districts 8 and 12 have the highest Hispanic populations. Yet that concentration does not seem to have resulted in elevated violence, at least compared to the five districts with high numbers of Black residents.

The graph below lists the six most common factors that led to the homicide or nonfatal shooting. In over a third of the cases, the resort to firearms resulted from an argument or fight. If those classified as unknown are excluded, arguments and fights account for more than half. 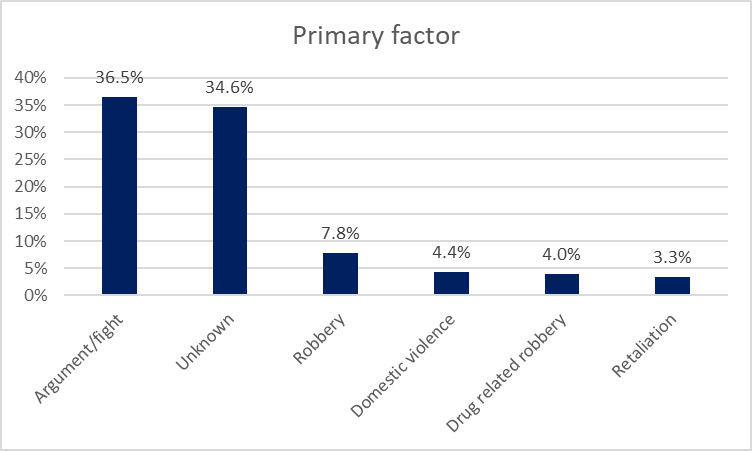 These data raise more questions than solutions. One is what accounts for the increase in shootings in 2020 and 2021? The most likely culprit seems to be the COVID-19 pandemic.

But what specifically about the pandemic caused the surge? Is it a reaction to the danger of getting sick or dying? Or does the surge in shootings stem from isolation from friends and family?

As more of the population gets vaccinated and the virus becomes less threatening, will the surge reverse itself? Even if the virus recedes, the long-term challenge of gun violence is likely to remain.

A major problem for cities like Milwaukee is the flood of handguns. Evidence for that assertion is offered by Milwaukee’s experience. As the next chart shows, handguns are the weapon of choice for inflicting death or injury. 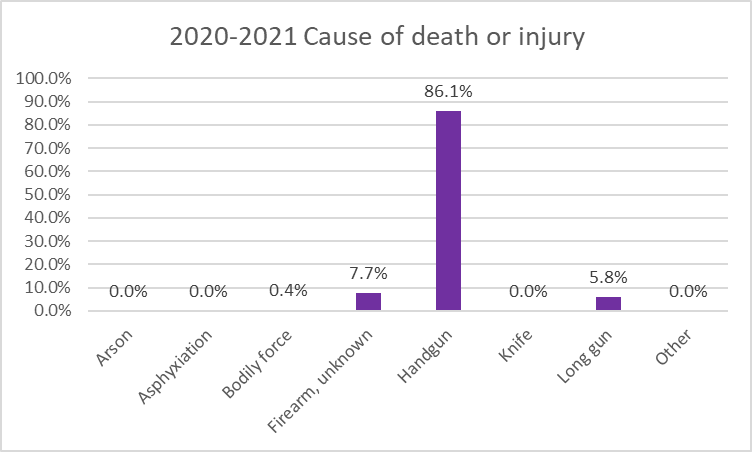 Any effective policy would include strategies to reduce the availability of handguns. Instead, members of the Wisconsin legislature seem intent on getting handguns into the hands of people unable to handle them responsibly. Consider recently introduced legislation that removes a requirement that anyone from out of state carrying a concealed weapon be from a state that performs background checks as part of issuing a concealed carry permit. It would allow out of state visitors that have not undergone a background check for their concealed permit to legally carry a concealed weapon in Wisconsin.

The data seem to show that in most cases the shooter does not go with the intent of killing someone. The purpose of carrying the gun is safety. When an argument develops or in response to an insult, a gun is produced.

In Milwaukee and other cities, gun culture feeds on itself. Most directly, in the sense that if others are likely to be armed, one begins to feel the need to also be armed.

Finally, the reasons behind the prevalence of homicide and shooting in the Black community needs addressing. Economically the Hispanic community has many of the same challenges. It seems likely that the often-fraught relations between the police and Black communities are part of the reason. If one cannot trust the authorities to settle disputes, doing it yourself may become attractive. Acting Chief Jeffrey Norman’s emphasis on community policing seems promising.

2 thoughts on “Data Wonk: Why is Milwaukee’s Murder Rate Increasing?”