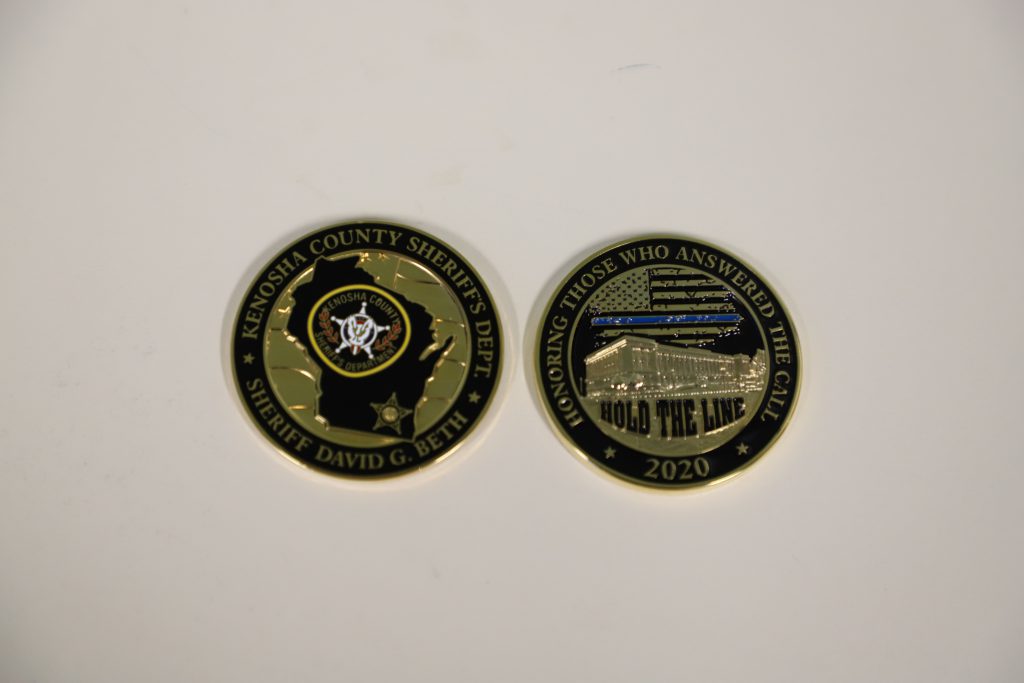 Last year, after the unrest in the City of Kenosha died down following weeks of protest, Kenosha County Sheriff David Beth wanted to come up with a way to show his appreciation for all the people who had come to help him and his agency.

Just three months earlier, the sheriff’s department and numerous other law enforcement agencies had been enveloped by the unrest that followed the shooting of Jacob Blake by a Kenosha Police Officer.

Law enforcement officers from as far away as Bayfield County came to Kenosha to respond to the unrest. The police response was often violent and in one infamous video, law enforcement officers are seen providing armed civilians with water and telling them they were appreciated. Soon after that, Illinois teenager Kyle Rittenhouse, a self-styled militia member, was charged with killing two people and injured a third.

In a letter written to the leaders of many of the local, state and federal agencies that responded to Kenosha’s call for assistance, Beth decided he’d show his thanks by distributing custom-made challenge coins. 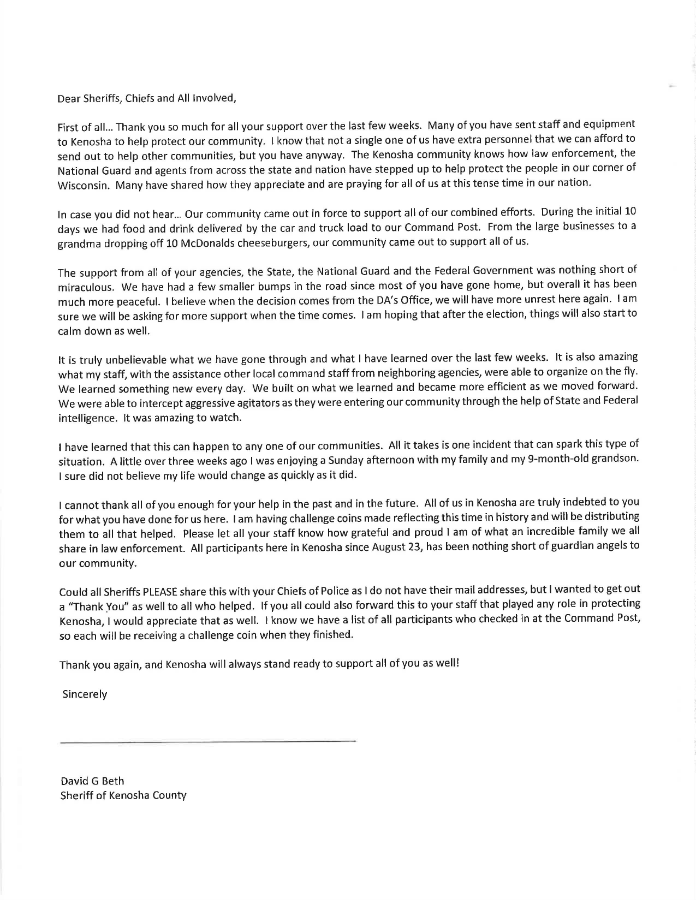 Challenge coins began as a military tradition and have become common in the law enforcement community. The custom-made coins, or medallions, are used to signify membership in an organization, unit, or to commemorate specific accomplishments. Following the global protest movement triggered by the killing of George Floyd in Minneapolis, civil unrest-related challenge coins began circulating through police agencies.

“I cannot thank you enough for your help in the past and the future,” Beth wrote in a letter obtained by Wisconsin Examiner via an open records request. “All of us in Kenosha are truly indebted to you for what you have done for us here. I am having challenge coins made reflecting this time in history and will be distributing them to all that helped. Please let all your staff know how grateful and proud I am of what an incredible family we all share in law enforcement. All participants here in Kenosha since Aug. 23, has been nothing short of guardian angels to our community.”

The coin, images of which were provided to the Wisconsin Examiner by the sheriff’s office, depicts the Kenosha County courthouse — where many of last year’s protests took place — above the words “hold the line” and below a waving thin blue line flag. The coin is similar to challenge coins distributed within the Kenosha Police Department (KPD), which were first reported on by the independent media website Never Stop Media. KPD’s version of the challenge coins showed a line of riot officers standing in front of the courthouse with the words “hold the line,” and a thin blue line positioned below them.

Randy Shrewsberry, founder and executive director of the Institute for Criminal Justice Training Reform and a former police officer, took a look at the challenge coins distributed by Kenosha’s law enforcement agencies. He said, “memorabilia that celebrates a painful chapter in our country’s history only serves to embolden the ‘us against them’ mentality that too often exists in policing today. In lieu of taking the time, money and resources to create and distribute these pins, it’s my view they would be better served to evaluate the messages that protestors were sending to law enforcement and work to heal these wounds with improved training, policies, and changes to culture.”

A law firm has been tasked with investigating the distribution of the coins in the Phoenix Police Department. Department leaders were aware of challenge coins in the past. So far, after the recent incident, no officers have been investigated or disciplined for making and distributing the coins.

The Louisville Police Department released a statement saying it did not distribute the challenge coins in an official capacity. Public Information Officer commander Sgt. John Bradley said in a statement, “Any person in this country is free to privately purchase what novelty items they choose free of government involvement or intervention just as the books, cookies, clothing or cars they decide to buy.”

Louisville Mayor Greg Fischer said of the challenge coin, “We do not agree with its implied message or support it in any way. And its messaging does not reflect our goals and actions to build trust and legitimacy between police and the community they serve.”

Beth, the Kenosha sheriff, wrote in his letter to law enforcement partners, “could all Sheriffs PLEASE share this with your Chiefs of police as I do not have their mail addresses, but I wanted to get a ‘thank you’ as well to all who helped. If you could also forward this to your staff that played any role in protecting Kenosha, I would appreciate that as well. I know we have a list of all participants who checked in at the Command Post, so each will be receiving a challenge coin when they [are] finished.”

Other police agencies in the area that responded to protests last year, including the Milwaukee Police Department and Wauwatosa Police Department, told the Wisconsin Examiner that they weren’t aware of challenge coins being distributed to staff after the protests.

Challenge coins — because they are physical objects, not documents, and because they are often ordered and paid for by individual staff as opposed to an agency — cannot necessarily be uncovered through a public records request. KPD and KCSD released pictures of their challenge coins through their public information offices upon request from the media.