Did DA Delay Mensah Decision Due To Kenosha Unrest?

Wauwatosa Police indicated in emails that the Kenosha unrest in August delayed the decision in Alvin Cole shooting.

By Isiah Holmes, Wisconsin Examiner - Apr 8th, 2021 08:05 pm
Get a daily rundown of the top stories on Urban Milwaukee 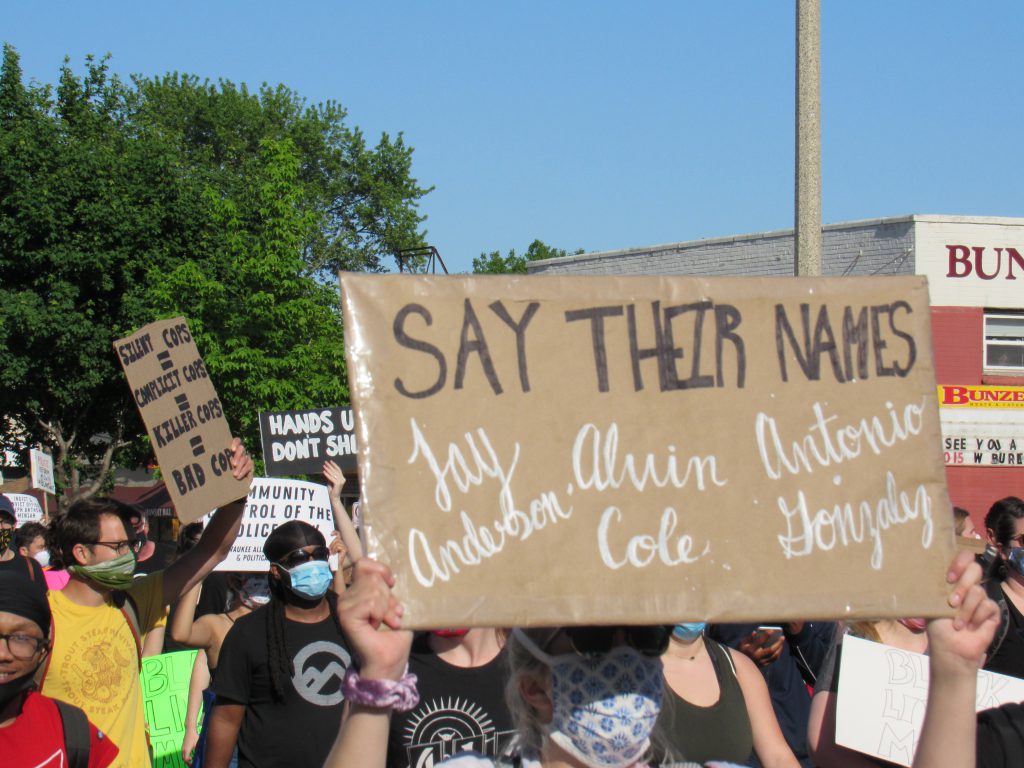 Protesters gather to march in Wauwatosa in response to the deaths of Alvin Cole, Jay Anderson Jr., and Antonio Gonzalez. All were killed by the same Wauwatosa officer, Joseph Mensah. Photo by Isiah Holmes/Wisconsin Examiner.

On Aug. 25 2020, someone within the Operations Bureau of the Wauwatosa Police Department (WPD) contacted members of the U.S. Marshals Service (USMS) to assist in curfew enforcement after the announcement of the decision in the shooting of 17-year-old Alvin Cole. This was 43 days before Milwaukee County District Attorney John Chisholm announced that no charges would be brought against officer Joseph Mensah, who fatally shot Cole in February 2020.

“Our PD is planning a large operation for civil unrest that could occur AFTER our DA announces an anticipated clearance for PD Mensah for the February OIS [Officer Involved Shooting],” it read. “DA Chisholm will give me 7 days advanced notice WHEN the clearance news will come out. It is my intent to run a 7 day operation, heavy on the 4p-12a hours, to deal with civil unrest.” 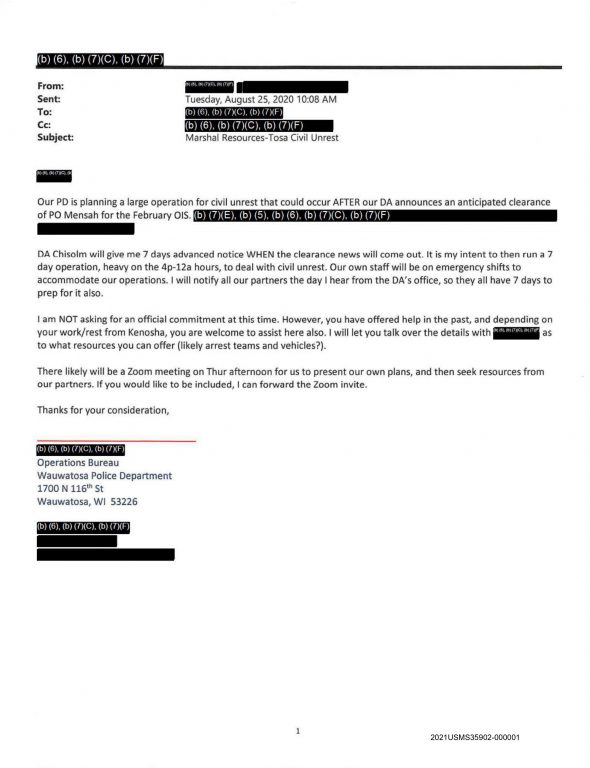 The message was obtained via Freedom Of Information Act (FOIA) request information by Wisconsin Examiner with the USMS. In late August, as the fallout of the Jacob Blake shooting engulfed Kenosha, rumors circulated among protest groups that a clearance in the Cole shooting was being held up until Kenosha’s unrest ended. Some of these messages between US Marshals and local law enforcement seem to confirm those suspicions. Parts of the communications, particularly the senders, are often redacted.

On Aug. 26, a WPD employee in the Operations Bureau sent a confidential Zoom meeting link to the U.S. Marshals. “We anticipate civil unrest due to the release of these findings,” part of the message reads, “which will be released in coordination with the MPD Homicide Team through a recorded community briefing.” It also added that, “DA Chisholm has NOT advised of when he will release his findings. Clearly the Kenosha civil unrest has slowed down the time frame of this release.” 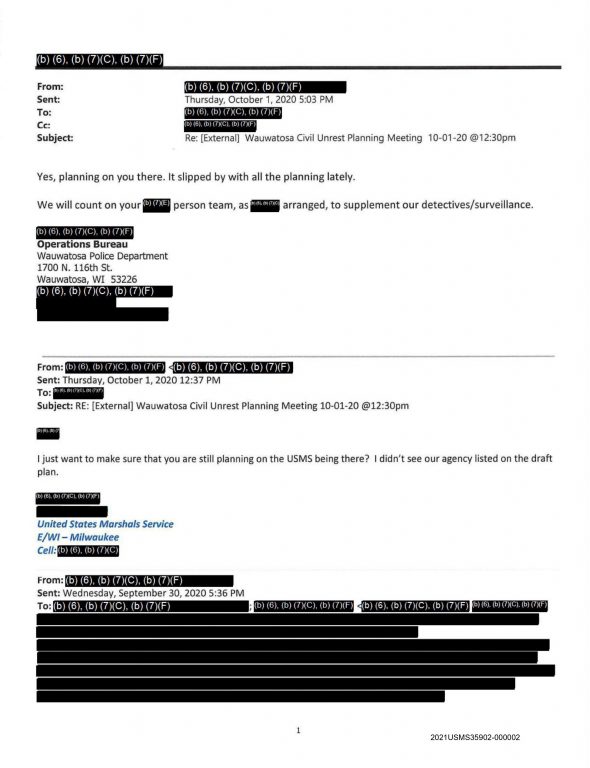 By Sept. 30, the district attorney’s office had given WPD its seven-day notice. On Oct. 7 Chisholm’s decision became public, and nearly a week of militarized curfew followed in Wauwatosa. That same day, a U.S. Marshal informed colleagues that, “this is your formal notice that the Task Force will be assisting Wauwatosa in the same QRF manner that we did previously in Milwaukee and Kenosha.”

It’s unclear whether the Marshal was talking about Milwaukee in reference to the first protests during the summer. At that time, many local officials assured the public that Milwaukee would not host the kinds of tactics seen in Portland, Ore. As Wisconsin Examiner  reported, however, U.S. Marshal teams in Portland were demobilized and sent directly to Kenosha. Meanwhile, marshals involved in or aware of those deployments were also preparing for Wauwatosa’s curfew. 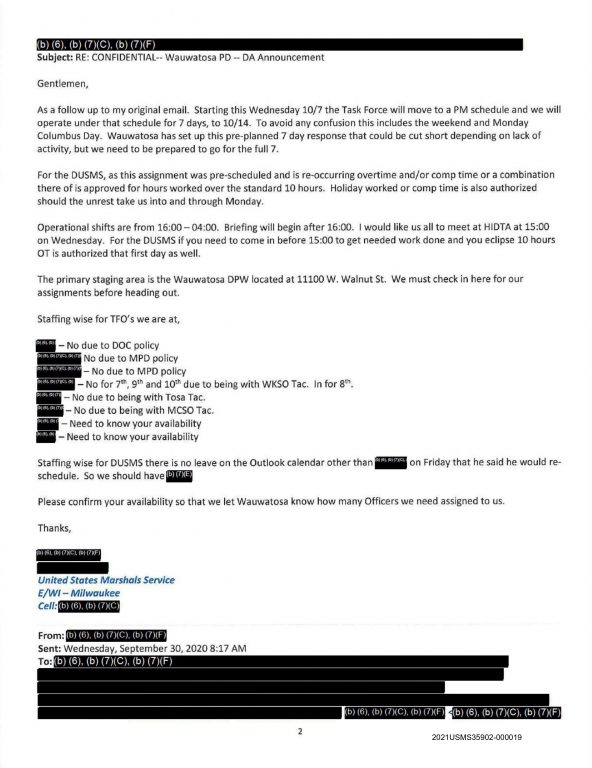 On Oct. 1, as the Cole decision loomed, USMS members asked WPD why their agency wasn’t included in the operations draft list. “I just want to make sure that you’re still planning on the USMS being there?” the sender asked. “I didn’t see our agency listed on the draft plan.” A person in WPD’s operations bureau whose name was redacted replied: “Yes, planning on you there. It slipped by with all the planning lately. We will count on your [redacted] person team, as [redacted] arranged, to supplement our detectives/surveillance.”

During curfew operations, daily reports were compiled by the U.S. Marshals, some of whom were assigned to a Fugitive Task Force. As in Kenosha, the reports describe how heavily law enforcement relied on social media and other electronic intelligence to stay ahead of the protesters’ actions. Messages also describe U.S. Marshals being assigned to Jeeps and Durangos alongside WPD personnel. Those unmarked vehicles were seen by residents, shuttling bands of armed, quiet, camouflaged men through the suburb’s darkened roads.

It was on Oct. 8 that the “snatch teams” first made an appearance. Early on, as protesters entered Wauwatosa, a bicycle scout narrowly escaped being picked off as he checked the marchers’ route. As he ran back to warn the group, other protesters discovered that an unmarked rental minivan filled with men in tactical gear had somehow assimilated itself within the car caravan.

Later that night, Cole’s mother and older sisters were arrested by SOG and the USMS task force. An entry on this day noted the USMS had become “more involved” by the marshal who authored it. Although the entry describes the arrest scene where Cole’s family were apprehended, the names of those arrested are redacted. 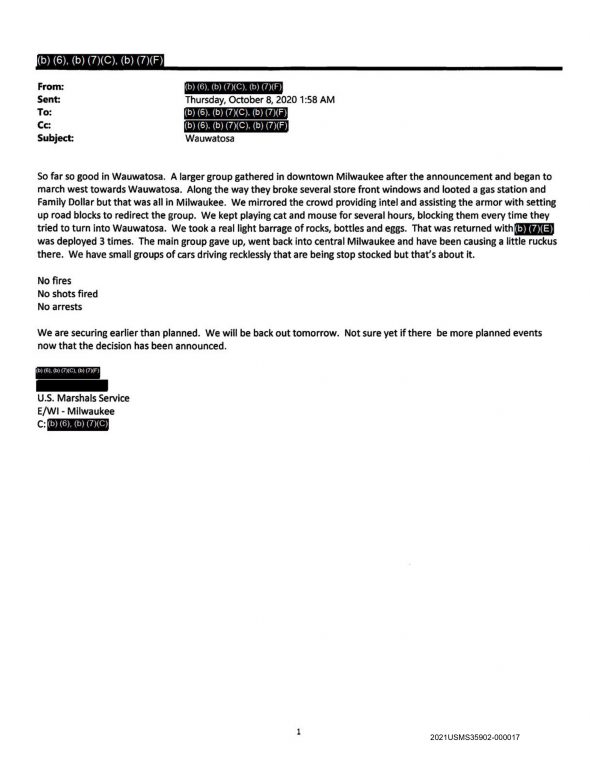 An identical scene is described in WPD reports, which were released via open records requests in January. The Marshal’s communication also tracked protesters as they traveled to various police departments in an attempt to find missing comrades — from the West Allis Police Department, where some detainees were sent, to the Waukesha County Jail where Cole’s sister Taleavia was taken.

On Oct. 12 the Marshals noted that, “our time with Wauwatosa PD is at an end.” As the emergency declaration in Wauwatosa ended, Chief Barry Weber held a press conference alongside Mayor Dennis McBride. Weber discounted and downplayed stories journalists had heard from numerous protesters. The Marshals, however, faded into the background as WPD continued its hardline tactics even after the curfew was over.

Dozens of lawsuits have been filed in connection with officer behavior during the curfew, and investigations have shown that WPD engaged in politicized targeting of protest supporters. Details of the involvement of the USMS and other federal agencies during those days continue to surface.

The Milwaukee County District Attorney’s Office hasn’t responded to a request for comment on this story. Wisconsin Examiner will add any reply that comes here. Wisconsin Examiner also asked WPD when it first became aware that the Cole shooting was going to be cleared. A spokeswoman said, “That is not a question I can answer at this time as there are ongoing legal proceedings with the city and department regarding the curfew.”