By Isiah Holmes, Wisconsin Examiner - May 12th, 2021 05:23 pm
Get a daily rundown of the top stories on Urban Milwaukee 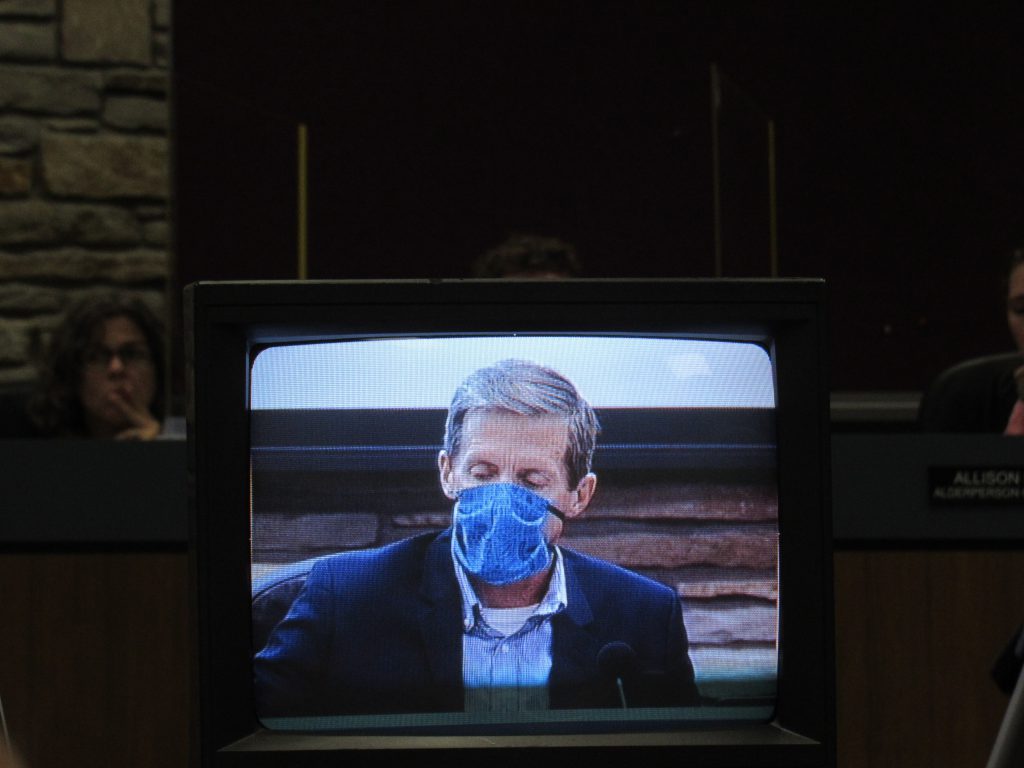 Wauwatosa Mayor Dennis McBride listens to the protesters, Coleman, and one of the Cole family’s lawyers. Photo by Isiah Holmes/Wisconsin Examiner.

Nearly four months after first learning that the Wauwatosa Police Department (WPD) had labeled its own mayor a “higher value target” (HVT) in a detective’s Powerpoint, an internal investigation conducted by WPD has been released to the Wisconsin Examiner. However, its conclusion that the Powerpoint’s creator and WPD’s Investigative Division “did not conduct any investigation into Mayor Dennis McBride,” appears to be flawed.

The Powerpoint labeling McBride as a higher value target was emailed by WPD Detective Joseph Lewandowski to a supervisor, Sgt. Brian Skornia, on September 1, 2020. It had been created as a case update into an incident in August, where a gun was fired by a marcher during a protest outside the home of former Wauwatosa officer Joseph Mensah. 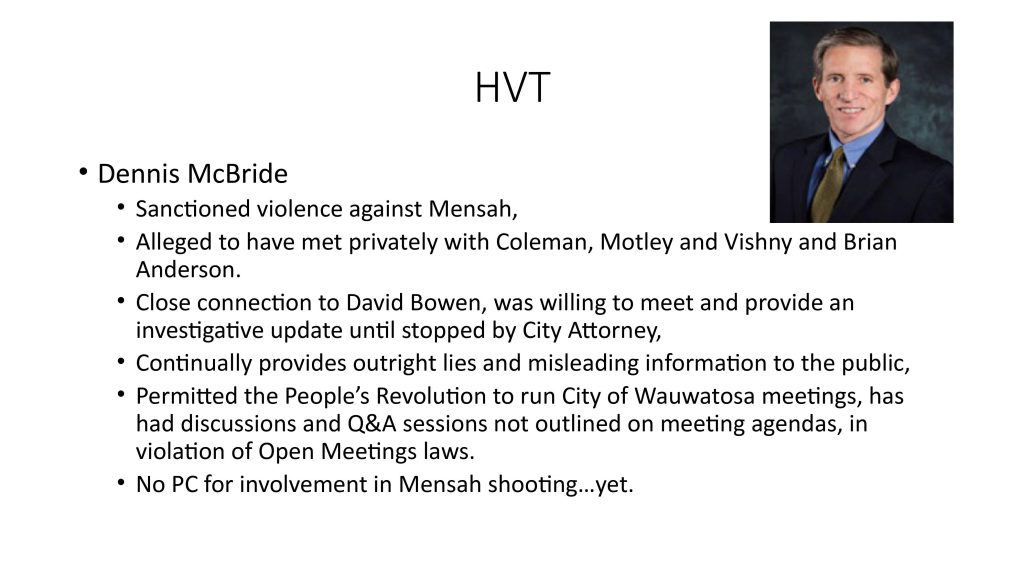 Accounts differ as to the events of that day. Both Mensah and the protesters accused one another of instigating the confrontation, with Mensah posting on Facebook that he had been “both assaulted, punched, and ultimately shot at several times.” However, a day after the incident, WPD, which led the investigation into the incident, stated that, “a single shotgun round was discharged by a member of this group,” in reference to protesters. Three protesters were arrested in connection with either handling or firing the shotgun, during no-knock raids soon afterward. Others were arrested and questioned on the incident.

According to the internal investigation, “Det. Lewandowski was the lead investigator for that incident.” As a detective, Lewandowski is also a member of WPD’s Special Operations Group (SOG), which conducts specialized investigations, covert surveillance, and the department’s cell phone data extraction operations. The unit also found itself at the nexus of WPD’s efforts to contain and discourage Black Lives Matter protests in the suburb during 2020. On Sept. 1 Lewandowski, who took sole responsibility for creating the Powerpoint, used the presentation for an “in-house briefing” involving Sgt. Skornia and Lt. Shane Wrucke. Wrucke has ties to SOG, and both he and Skornia continue to work in WPD’s Investigations Division.

The investigative report states that “at this point in the investigation, all the main people responsible for the shooting on 100th Street were in custody and follow up investigation was being conducted.” As he conducted the initial phase of the investigation, Wrucke wrote, “I was briefed on this document on Sept. 1 and I recall seeing the slide about Mayor McBride. It was clear to me that parts of the slide were made in jest. I directed Det. Lewandowski to remain focused on those individuals present at 100th Street and to not get distracted by politics.”

McBride was the fourth and last person on the higher value target list which also included Rep. David Bowen (D-Milwaukee), Tiffany Henry, and Khalil Coleman, a local activist who helped organize The People’s Revolution (TPR) protest group. The investigation noted that while Coleman, Bowen and Henry were being subjected to “active investigations” due to their presence during the protest at Mensah’s home, they and McBride were “miscatagorized” as targets. “Lewandowski conceded that the term ‘high value target’ was misused and that anyone labeled as such was miscategorized, especially Mayor McBride.” Instead, all four should have been referred to as “prominent people.” No one on the list was arrested in connection to the incident at Mensah’s house.

McBride’s slide in the Powerpoint accused him of several things. It claims that the mayor “sanctioned violence against Mensah,” “continually provides outright lies and misleading information to the public,” “permitted the People’s Revolution to run City of meetings, has had discussions and Q&A sessions not outlined on meeting agendas, in violation of Open Meetings law,” and concludes, “no PC [probable cause] involvement in Mensah shooting…yet.”

The internal investigation addressed all of those points. It found that Lewandowski believed McBride “did not appropriately condemn the violence,” and thought he was wrong to say Mensah’s three police shootings over five years were “unique.” The investigation noted that open meetings law “is not for our agency to address.”

It added, however, that “information was obtained through investigation that indicated that there were or may have been meetings between Mayor McBride and Rep. Bowen and/or The People’s Revolution, who were being actively investigated.” In September, however, a WPD spokesperson told Wisconsin Examiner that “no specific group is being investigated,” after protesters had seen WPD begin escalating their responses to the marches. Ultimately, the investigation acknowledged that on McBride’s slide in the Powerpoint, “some of the information had investigative relevance,” due to McBride’s dialogues with Bowen.

Although Wrucke, Captain Michael Schultz, and Chief Barry Weber all repeatedly stressed in the investigation that being a higher value target doesn’t always have negative connotations, the investigation itself acknowledges that it was negative in the context of the Powerpoint. “The use of the term here gives the appearance that there was a strong desire and dedication of vast resources to investigate those individuals. This was not the case with this incident,” the investigative report states. “No additional resources were dedicated to investigate any of the ‘high value targets.’”

Documents released by WPD in January, however, contradict the report’s assertion that no other efforts were put into investigating McBride. On Aug. 16, 2020, Lewandowski wrote a report describing an interview with Niles McKee, who had been arrested after the incident at Mensah’s house, and was charged with harboring and aiding a felon. McKee’s case continues to play out in court and, according to the Wisconsin Circuit Court Access website, he’s scheduled for a competency hearing on May 18. 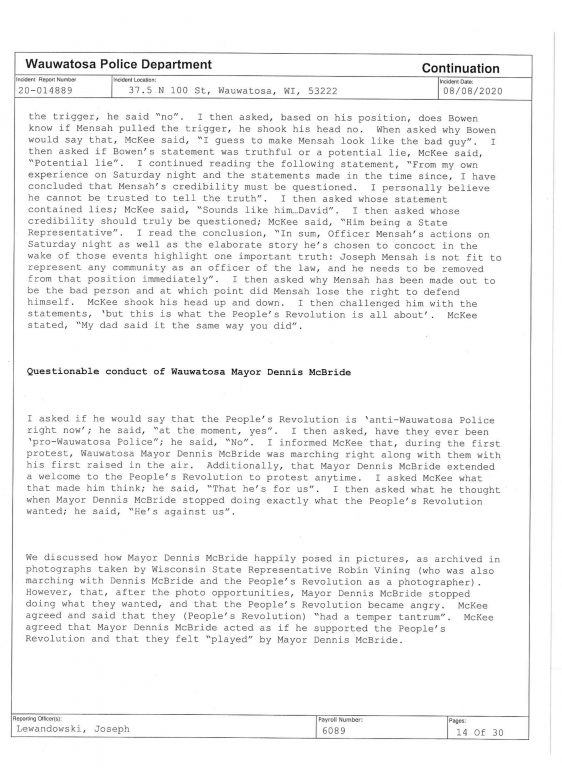 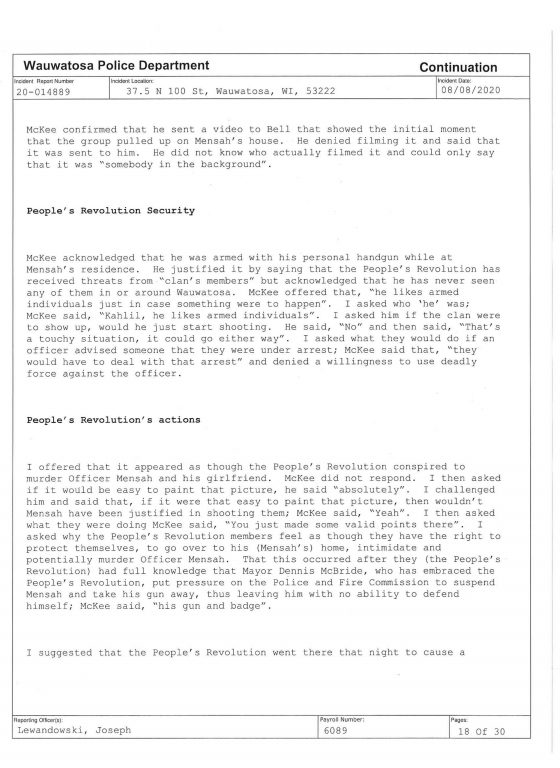 Lewandowski also mentioned “that the People’s Revolution demanded that there be a civilian oversight committee in charge of the police department.” He added that McBride created such a committee and that, “I then asked if there are people that hate you, should they be in charge of you, McKee shook his head no.” Lewandowski also asked McKee, “if he thought it was appropriate for an elected official to change rules to appoint non-residents to a police oversight committee, when those people hate the police.” McBride is discussed and mentioned throughout McKee’s interview.

In a separate report interviewing another arrested protester on Aug. 16, Lewandowski again inquired into the mayor. “I suggested that there should be a line that gets set and is not crossed,” adding that, “I suggested that our Mayor (Wauwatosa Mayor Dennis McBride) has shifted that line, for whatever his reasons.” As in the other interview, Lewandowski noted points where detainees agreed with his statements.

Additionally, on Aug. 12, Detective Martin Keck, who’s also a member of SOG, wrote his own report mentioning the mayor. Keck was interviewing Ronald Bell, who had also been arrested following the incident at Mensah’s home. Bell was charged with 2nd Degree Recklessly Endangering Safety and Battery to a Law Enforcement Officer. Following the same theme of inquiring into McBride’s conversations, Keck noted, “the group has communicated their concerns with Mayor McBride at meetings but does not know of any private interactions between the mayor and the group.” 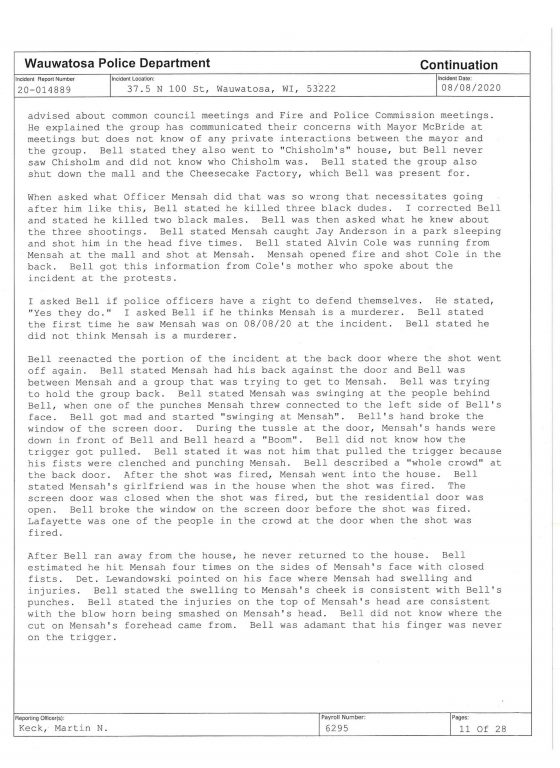 Emails sent by Keck on August 9, which were obtained by Wisconsin Examiner through an open records request, mention the involvement of resources from the Milwaukee Police Department, Milwaukee County District Attorney’s Office, and terrorism agents from the Federal Bureau of Investigation in the Mensah house shooting investigation. However, WPD’s internal investigation stresses that only Lt. Wrucke, Sgt. Skornia, and Detective Lewandowski were aware of the higher value target Powerpoint which was created nearly a month later.

WPD’s internal investigation left several points of the higher value target controversy unaddressed. Attorney Kimberley Motley, who represented families and protesters and is currently pushing dozens of lawsuits involving WPD conduct, is also mentioned in McBride’s Powerpoint slide. So, too, is Attorney Deja Vishny, who has worked with Motley on the Wauwatosa cases. In October, while interviewing protesters arrested during the curfew, Lewandowski spoke disparagingly of both McBride and Motley.

While McBride was referred to as a coward using an expletive, Motley was blamed for unrest in Wauwatosa. Neither Motley’s mention in the higher value target slides, nor Lewandowski’s conduct during the interrogation, were addressed by the investigation. The investigation found that the Powerpoint slide was “out of character for him and there was no ill-intent. Det. Lewandowski was embarrassed by the distraction this information caused and understands the gravity of the situation.” The document adds that Lewandowski was working a lot of overtime, and that he was frustrated with Wauwatosa’s city administration.

Similarly, none of the reports written by Lewandowski and other members of SOG mentioning McBride were mentioned at all in the investigation. Rather, the report states that no investigations were conducted into the mayor. During the investigation, Lewandowski was interviewed alongside WPD Detective John Milotzky. The detective was involved in investigations of TPR protesters, and is the president of the Wauwatosa Peace Officers Association (WPOA).

Many of the statements made in Lewandowski’s higher value target Powerpoint sent on Sept. 1 were echoed the next day by Milotzky in official WPOA statements. “Many of the points made by Lewandowski were sentiments that the WPOA were also addressing,” the investigative report states.

The same day the Powerpoint was sent, Chief Weber sent two letters regarding Motley and Bowen. One went to the Office of Lawyer Regulation complaining about Motley’s statements against WPD, and the other to Assembly Speaker Robin Vos requesting that Bowen be expelled from the state Legislature. Weber, however, has asserted since the Powerpoint was discovered that he was unaware of its existence. These points of overlap among the higher value target Powerpoint, the WPOA, and Weber’s statements are not addressed by the investigation.

Ultimately, Lewandowski was found to have violated rules prohibiting obscene or defamatory language, and those outlining professional image standards. As a result, a written reprimand was placed in his personnel file. It doesn’t appear he was disciplined in any other way, such as through suspension. Lt. Wrucke and Sgt. Skornia were not disciplined.

Weber stated that “Detective Lewandowski is guilty of creating a document, one that is inappropriate and unprofessional.” Lt. Wrucke highlighted in the investigation that “this situation is a stark reminder that all documents are open records and need to be treated as such.”

2 thoughts on “Tosa Police Had Many ‘High Value Targets’”