How U.S. Marshals Came to Kenosha

Teams were shut down in Portland and sent to Kenosha protests, despite opposition of Evers, Kaul.

By Isiah Holmes, Wisconsin Examiner - Apr 5th, 2021 07:49 pm
Get a daily rundown of the top stories on Urban Milwaukee 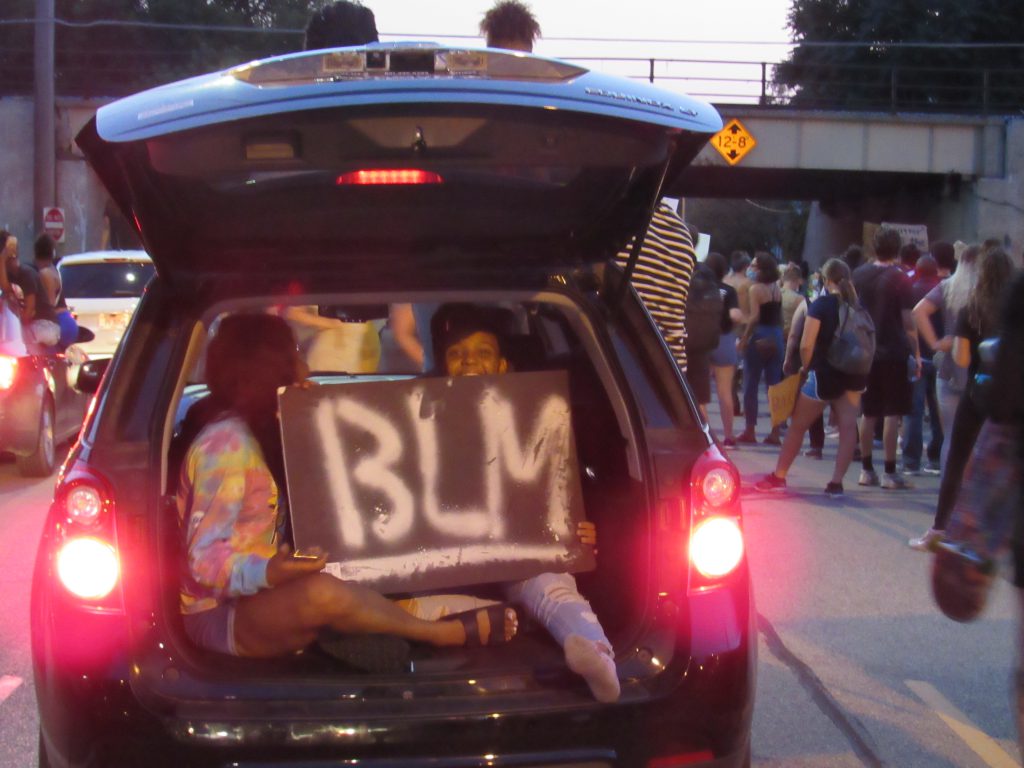 Protesters gather in Kenosha the second night of protests on Aug. 24, 2020. This was before the clashes with police later that night. Photo by Isiah Holmes/Wisconsin Examiner.

Newly obtained documents show that teams of U.S. Marshals in Portland, Ore. were demobilized and sent to Kenosha in late August, as protests and unrest in the city grabbed the world’s attention. The records were obtained by the Wisconsin Examiner through Freedom Of Information Act (FOIA) requests with the U.S. Marshals Service (USMS).

The documents include communications between USMS personnel and other law enforcement officials, updates on daily operations, as well as records detailing rotating deployments. Many of the documents have redacted portions, particularly around who within the USMS was sending particular communications. Nevertheless, the documents offer a compelling look into how Marshals were utilized not only in Kenosha during August, but also in Wauwatosa two months later.

Two days after Kenosha police officer Rusten Sheskey shot 29-year-old Jacob Blake seven times at close range, following a domestic violence call, members of the USMS were in contact with the Kenosha Police Department. “At that time,” reads one message sent by a marshal on Aug. 25, 2020, “protest events in the city had not reached the point of needing a law enforcement response outside of local Kenosha County law enforcement agencies and surrounding counties. In the early morning hours of Aug. 24, the protests devolved into a riot situation and the Kenosha Police Department requested our assistance.” 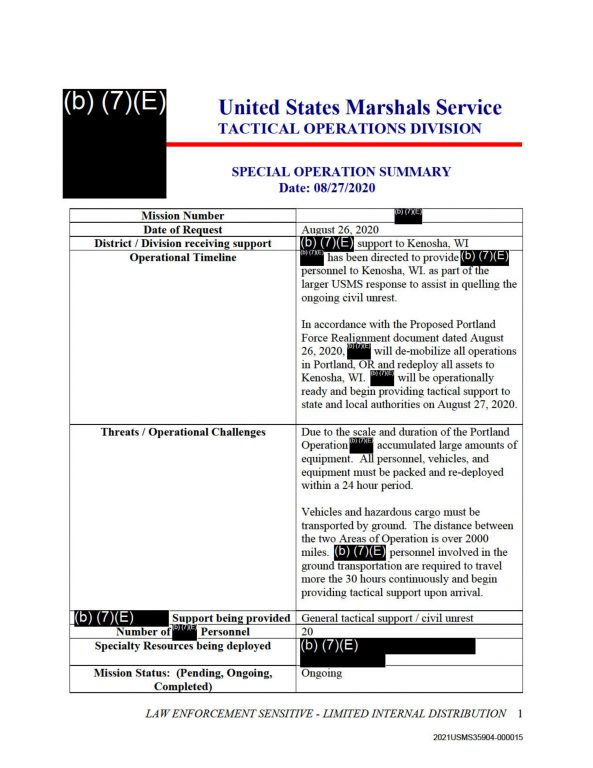 When then-President Donald Trump first sent federal agents to Portland, Ore., the country was shocked by the street-level tactics deployed by federal agents, particularly the fully kitted-out tactical units filmed grabbing protesters off the streets and pulling them into unmarked rental vehicles.

In July 2020, Milwaukee District Attorney John Chisholm joined other local officials in condemning those tactics. At the same time, Milwaukee was due for a surge in federal assets as part of Operation Legend. Brewing concerns that the operation would be used against protesters were quelled by U.S. Attorney of the Eastern District of Wisconsin Matthew Krueger. In early August, however, then-Congressman Jim Sensenbrenner (R-Menomonee Falls) issued a letter to Wauwatosa Mayor Dennis McBride pressuring the mayor to accept federal assets to the city, or risk a migration of residents from the suburban area.

Although the forces in Portland were mostly unidentifiable on the street, U.S. Marshals were determined to be among the agencies involved in the so-called “snatch teams.” Newly obtained documents show that the USMS teams involved in Portland were later sent to Kenosha. The units were deployed in order to support a larger USMS response to the unrest in Kenosha.

“In accordance with the Proposed Portland Force Realignment document,” reads a Special Operation Summary dated Aug. 26, “[redacted] will de-mobilize all operations in Portland, Or and re-deploy all assets to Kenosha, WI. [Redacted] will be operationally ready and begin providing tactical support to state and local authorities on Aug. 27, 2020.”

A section of the summary titled “Threats/Operational Challenges” states: “Due to the scale and duration of the Portland Operation [redacted] accumulated large amounts of equipment. All personnel, vehicles, and equipment must be packed and re-deployed within a 24 hour period. Vehicles and hazardous cargo must be transported by ground. The distance between the two Areas of Operation is over 2000 miles.” This summary notes that some 20 personnel were part of this deployment. 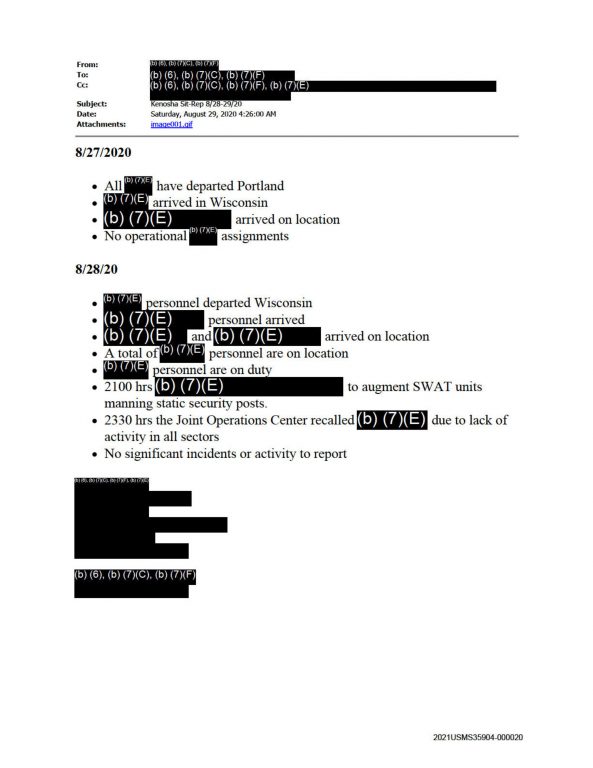 One enduring mystery of the federal deployments during the protests of 2020 is who, exactly, requested such teams. In response to the scenes out of Portland, Gov. Tony Evers noted that he declined Department of Homeland Security (DHS) assistance in Wisconsin but accepted Federal Bureau of Investigations (FBI) personnel. “Amping up the federal presence, I believe, will create more turmoil,” Evers said. The condemnations were echoed by Wisconsin Attorney General Josh Kaul who accused the Trump Administration of engaging in “fascist tactics” in Portland.

What the newly obtained documents show is that the USMS was in direct contact with both the Kenosha Police Department and Wauwatosa police, who appear to have requested their involvement. On Aug. 27, following a confidential law enforcement meeting to plan for Wauwatosa’s October curfew, a U.S. Marshal discussed the agents still on their way to the state.

“I didn’t want to complicate the call by jumping on and saying what the USMS assets might be able to respond to,” the message sent by someone within WPD states. “At present the USMS has [redacted] Deputies deployed and in route to the greater Southeast Wisconsin area to support Kenosha as well as to be in position to respond to [redacted] should unrest continue to spread.” It concluded, “my headquarters is aware of what is coming to Wauwatosa and Milwaukee and we are trying to develop a response.” 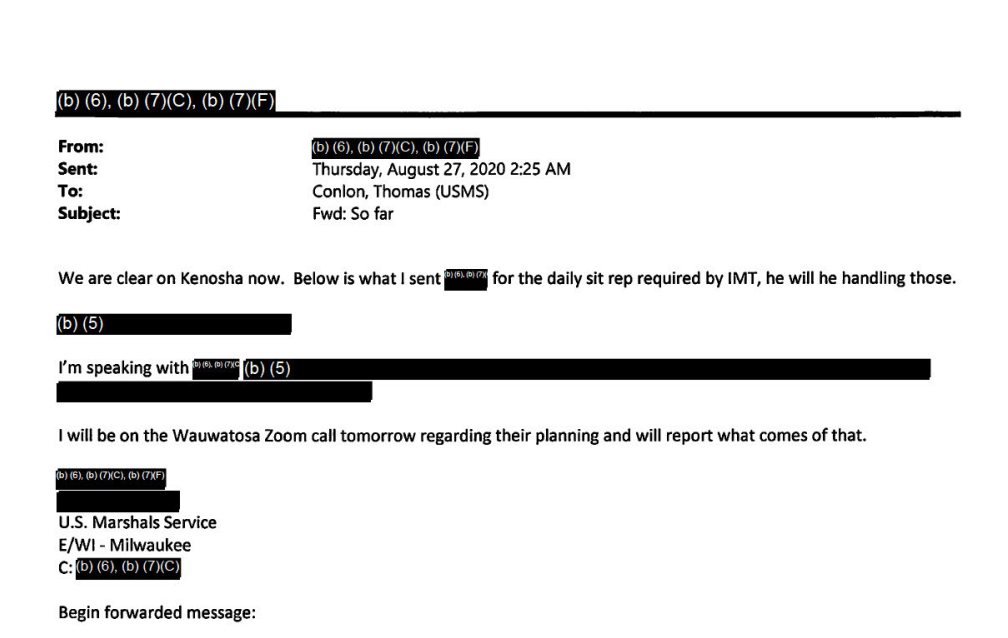 A communication between U.S. Marshals personnel, and someone within the Wauwatosa Police Department in early August, 2020. Screenshot by Isiah Holmes/Wisconsin Examiner. 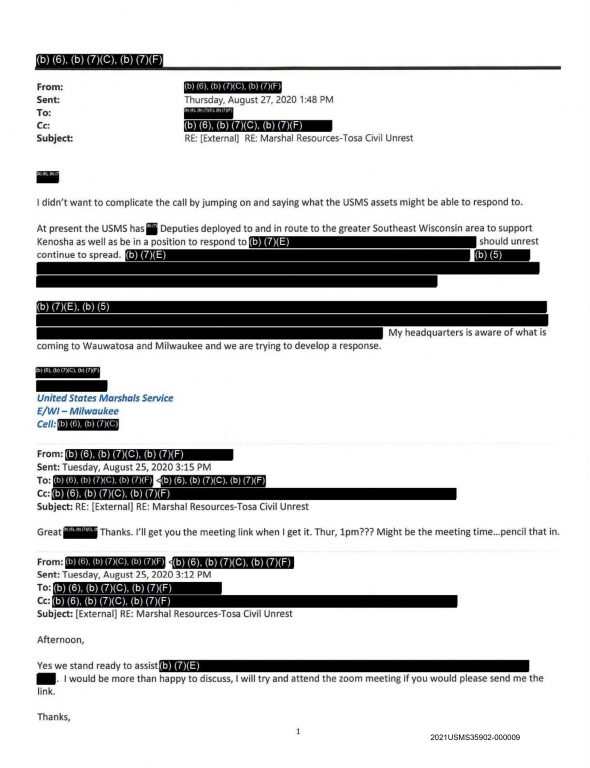 That same night, the mother and older sisters of Alvin Cole — Cole’s killing by a Wauwatosa officer that year was a key cause of the area’s protests — were arrested by the U.S. Marshals task force working alongside SOG while the two women were protesting Wauwatosa’s curfew. Tracy Cole, Alvin’s mother, was injured during her arrest and taken to a hospital. His sister Taleavia was arrested and eventually taken to the Waukesha County Jail where she was released later that night. Her phone was seized by officers. Tosa PD SOG specializes in cell phone data recovery and analysis.

From Aug. 27-Sept. 1, operations summaries show that personnel were rotating in and out of Wisconsin. While in Kenosha, these USMS assets conducted surveillance of protests, conducted targeted arrests, aided in local SWAT and crowd control units, and were involved in the tracking of 17-year-old Kyle Rittenhouse after he allegedly killed two protesters and wounded another. USMS personnel also served as Quick Reaction Forces (QRF) during Trump’s visit to Kenosha, as well as during Blue Lives Matter and Back The Badge rallies. Despite the fact that Rittenhouse and other self-styled militia members were drawn to Kenosha by the racially-charged Kenosha Guard Facebook page, much of the social media surveillance mentioned by the Marshals appears focused on Black Lives Matter protesters — especially those from the City of Milwaukee. 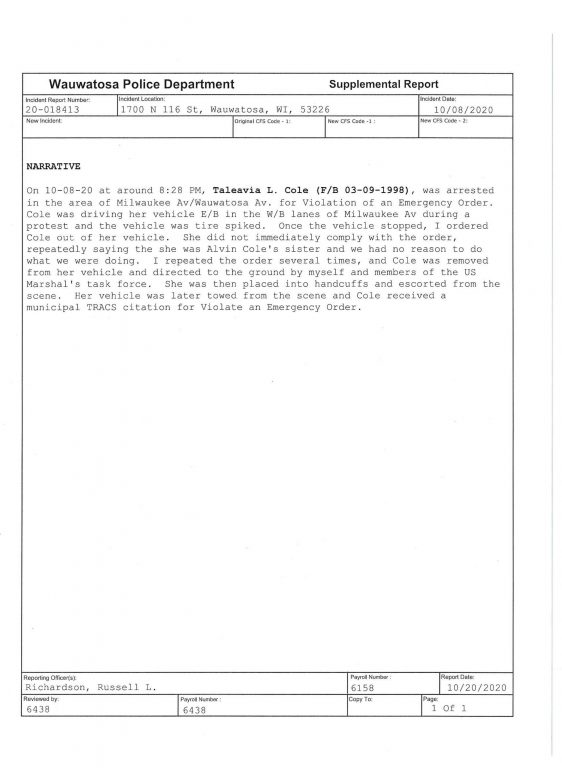 “Intel provided during our briefing showed that there was continued planning and support of unrest by outside influencers,” reads a Aug. 26 communique. “This was realized when our teams observed and surveilled multiple groups of outside influences in large packs of cars entering Kenosha from the north and south of the city. The night devolved very fast, faster than yesterday evening. Prior to tonight’s events, the City of Kenosha erected fencing around the courthouse complex, this fencing seemed to be a focal point by agitators who immediately began attacking the fencing. The protests quickly devolved into a riot situation and it continued until just recently, things have calmed down now and we are preparing to depart the rally point for home.”

Wisconsin Examiner reached out to the U.S. Marshals Service, and District Attorney Chisholm’s office for comment but has not yet heard back. The office of Kenosha County District Attorney Michael Gravely stated that the D.A. had no comment regarding the presence of Portland assets in the city.

One thought on “How U.S. Marshals Came to Kenosha”