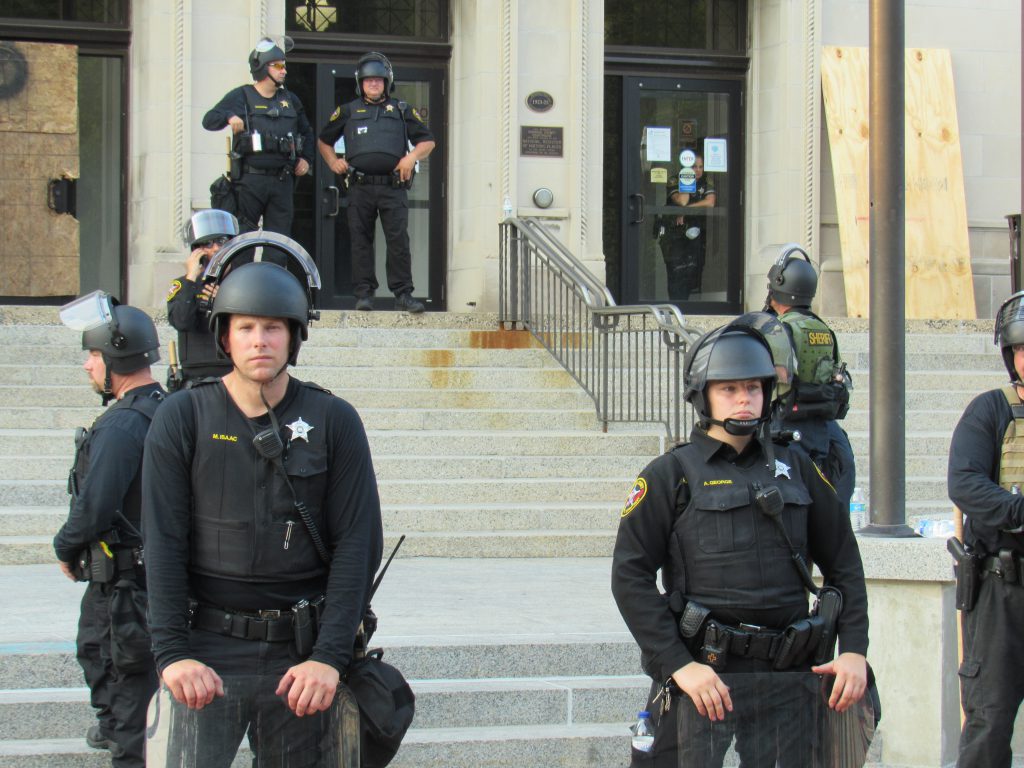 More than six months after Jacob Blake was shot by Kenosha police officer Rusten Sheskey last August, activists continue to push for change in the city.

In late April, three people were arrested during a sit-in outside of the Kenosha Public Safety Building, including Blake’s uncle, Justin Blake. The Kenosha News reported this week that the 52-year-old elder Blake was held in a restraint chair at the Kenosha County Jail for seven hours because he was refusing to speak or give his name during the booking process.

Blake, along with the Rev. Jonathan Barker of Grace Lutheran Church and former Somers Village Trustee Joseph Cardinali were arrested on April 25 for disorderly conduct because they were blocking the entrance to the public safety building as they continued to call for the firing of Sheskey — who was cleared of criminal charges and returned to work in March.

The Kenosha News has also reported that while Sheskey was on administrative leave following the Blake shooting, he lost his service weapon.

“Despite their presence being completely peaceful, organized, and safe, three individuals were arrested and taken into custody,” activist group Black Leaders Organizing for Communities (BLOC) said in a statement. “We find these developments troubling, that three community members who were peacefully demonstrating were arrested while Officer Sheskey who shot an unarmed man seven times in the back, and also lost his service weapon while on leave has not been [arrested], and has since returned to work. It has been even more disappointing that this crucial moment in our community has been met with deafening silence from not only the Mayor but by those serving on the city council.”

Also this week, the use of force investigation conducted by the Kenosha Police Department into the Blake shooting found that Sheskey had not violated any department policy when he shot Blake multiple times in the back.

“In light of Kenosha Police Department Officer Rusten Sheskey returning to duty, local activists, clergy, and the Leaders Of Kenosha gathered outside the Public Safety Building to make it known that many community members do not feel ‘served…with respect, fairness, and compassion’ in accordance to the Kenosha Police Department’s mission while Sheskey is still on the force,” BLOC said in its statement.